Many of you have seen my 'What Are The Models Saying This Winter?' segments, where I would highlight a few models and show you what they would be saying this winter. Well, I have gathered 4 of the long range models I feel give you the widest spread of what is being forecast for this winter.

If you want to see the previous 'What Are The Models Saying This Winter?' posts, the links are below.

This is the Beijing Climate Center (BCC)'s 500mb height anomaly forecast for the winter months of December-February. North America is actually above that deep red blob on the picture. The continent is shown as upside down, so it is a little hard to see. However, if we look closely, we see a blue swath extending through the South US and up the East Coast. This below normal height anomaly refers to the presence of a stormy pattern over that area. Such a forecast is not impossible- the North Atlantic Oscillation (NAO) is expected to be very negative throughout the winter, so a storm track through those areas is quite a realistic scenario. 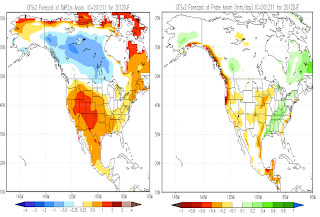 This is the Climate Prediction Center's Climate Forecast System (CFS) model, valid for the 3 winter months. On the left is temperature anomalies for winter, and on the right is precipitation anomalies. The CFS has a very warm winter for much of the West US, but also predicts warmth on the East Coast, as well as in the northern Arctic. The precipitation forecast calls for a dry Plains, a dry West Coast and Alaskan coast, as well as a wet New England.
Already I am seeing problems with this forecast. A warmer than normal north Arctic and northeast Canada tells me that there will be a ridge in place over that area, effectively a negative NAO. This would bring cold and stormy weather to the Northeast, not warm weather. Also, a warm anomaly in the West US implies a pattern similar to that of a positive PNA, where a ridge sets up in the West US and brings cold to the East US, again defying the warmth forecast. I do believe the precipitation forecast, however. 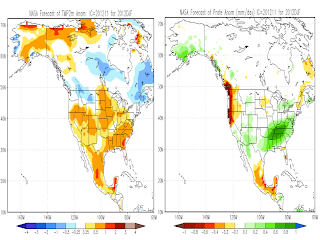 This is NASA's forecast for this winter. The NASA forecast has not been known to be too reliable, but I'll show it anyhow. The temperature forecast from NASA supports a warm Plains, Rockies and Southeast, with cooler than normal temperatures in the Northwest and far into New England. As for precipitation, a very wet Southeast and southern Ohio Valley is expected, but a very dry West Coast is expected.
The northern Arctic is neutral in temperature, telling me that NASA does not believe in a persistent negative NAO pattern. I believe that the 3 year gap between observed NAO values and winter conditions in North America will bring the NAO to a good negative stance this winter. Additionally, a very snowy October Siberia tells me that the nation will be cooler than normal in the end, especially thanks to February. I don't support the NASA forecast at the moment. 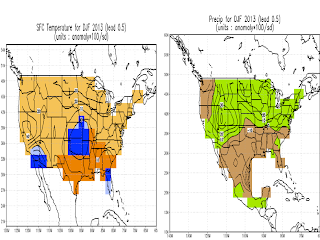 This is the ECCA ensemble forecast for the winter. Temperature forecasts are on the left, and Precipitation forecasts are on the right. The darker shaded areas on the left show skill areas on the model, meaning that the forecast has higher confidence than other areas. The ECCA is predicting a warm nation, especially in the South Plains and Southeast. However, cold temperatures are predicted in the central Plains.
I would expect these cold temperatures to be extended further north, and feel that the ensembles are just unsure of the whole situation. It doesn't take into account October conditions in Siberia or the 3 year NAO-North American Winter lag, so such a forecast can be forgiven. The precipitation forecast does not seem all that crazy, but I would extend wet conditions into the Southeast and dry up some of the Central Plains if I had my way.

These are a few models of many, and I picked out the ones that don't necessarily have the best track records, but express forecasts from as many different agencies as possible.

Andrew
By Andrew at 12:24 PM No comments: Links to this post 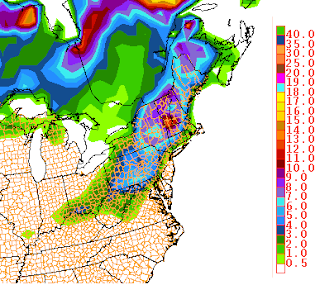 This is the snow depth forecast from this morning's 0z GFS model for just after 6 days out. As you can see, the GFS takes the system down through the south and begins to turn it up the East Coast in typical Nor'easter fashion. When the storm system gets near the New England coastline, the system's pressure plummets, indicating a rapid strengthening of the storm system. It gets even stronger as it nears Maine, leading to accumulating snowfall over much of the Northeast US.

Frankly, this isn't such a bad scenario. It has become evident that the system will take the path through the southern US and out into the Southeast Coast. Because there will be a negative North Atlantic Oscillation (NAO) in place, the storm track will favor a path for this system up the East Coast, as this GFS forecast is indicating. 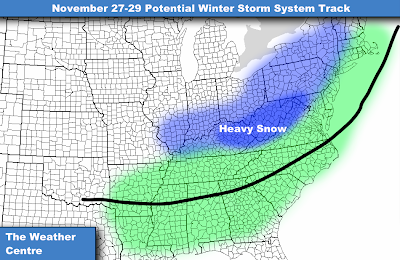 I'm still sticking with my forecast that I put out yesterday, which calls for rain near the coastline in the Northeast and snow inland. I should note that, thanks to the GFS, my snowfall expectations for the Northeast inland regions have been enhanced. I will play with the idea of putting out a snowfall forecast today or tomorrow, but at the moment, the ECMWF and GFS remain at odds with each other over this system.

Andrew
By Andrew at 10:19 AM No comments: Links to this post

This is the change of sea surface temperatures from September 2012 to October 2012, focused in on the north and central portions of the Pacific Ocean. What I am showing above appears to bode well for a positive PNA developing.

The PNA, the acronym for the Pacific North American index, is based in the northeast Pacific Ocean and has tremendous effects on the weather observed in North America. The PNA has two phases: positive and negative. In the positive phase, cold air tends to flow south and the storm track is shifted so it favors the Midwest/Great Lakes for precipitation. In a negative PNA, warmer weather is favored in the nation, while the storm track tends to miss much of the Eastern US. For example, in the Chicago Blizzard of 2011, there was a positive PNA happening that enabled the blizzard to go where it went.

The fact that we are starting to see warming in the Northeast Pacific is exciting. If such a warming trend continues through the month of November, the chances of a positive PNA will only continue to increase. This would, in turn, lead to more precipitation in states like Colorado and the east central Rockies, as well as the Midwest and Ohio Valley. A sturdy negative NAO would only help the Northeast as well.

Andrew
By Andrew at 9:58 AM No comments: Links to this post