A split in the polar vortex as a result of a changing pattern may lead to a colder than normal December.

A look at the relative atmospheric angular momentum chart gives us a good look at what we will be dealing with in the coming few weeks. While the things that go into this chart are complicated, dissecting it is relatively easy. Basically, in order to see wintry conditions over the US, one would want to see positive AAM anomalies propagating upward past the 60N line, with negative AAM anomalies in pursuit, but only propagating to the area below 60N. In the same sense, -AAM anomalies moving north past the 60N line and +AAM anomalies shifting into the regions below 60N would favor a very anti-winter environment. A glance at the current chart reveals that we see a mass of +AAM anomalies pushing up past the 60N parallel, with -AAM anomalies in hot pursuit below the 60N parallel. This tells me that the atmospheric pattern is due for a change, likely in a favorable direction for winter weather lovers in the US.

The change that is coming appears to be in the stratosphere, and will eventually be reflected on the surface.

The ECMWF model has been forecasting the development of a strong Wave 2 stratospheric event, with the development of a polar vortex-disrupting high pressure system that will aid in the cold weather potential for December. The image above shows the Wave 2 response, with the highest values stretched across the far upper stratosphere to the middle of the stratosphere, with a secondary, minor blip on the radar around the jet stream. As we see the +AAM anomalies propagating to the regions above the 60N parallel, I would dare to theorize that this stratospheric response will be at least partially initiated by the AAM development.  If that is to be true, then this modeled Wave 2 response would become far more likely, as the +AAM anomalies are already happening rather than just being forecasted. 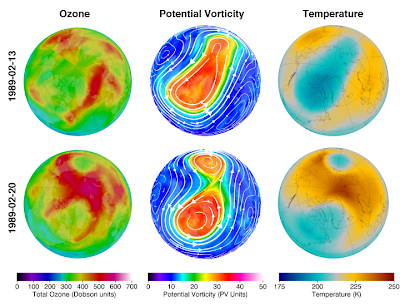 Now, there are two main types of stratospheric events that disturb or split the polar vortex. There is a Wave-1 response, which involves the polar vortex becoming elongated and/or weakened, however a split does not occur. This can result in displacement of the vortex out of the Arctic, but that prospect is not as likely as it is in a Wave-2 scenario. A Wave-2 stratospheric response involves the polar vortex being split into two main vortices, as the image from NASA shows above. While the temperature images show the Wave-1 and Wave-2 (top and bottom rows, respectfully) responses occur over Greenland and Eurasia, especially with the two split vortices where one vortex goes over Greenland and one goes into Eurasia, the split can lead the vortices into any land mass, not just those two regions.

This split is confirmed by the ECMWF potential vorticity forecast by Day 10, with one piece of the vortex going into Canada and the other, larger piece heading into Eurasia. Keep in mind that the polar vortex is one huge storm system that holds the pure Arctic air in its place, so when it splits and heads towards land masses, it's bringing that intense cold air with it. If the model projections verify, those in Canada should prepare for a big cold shock for wherever that polar vortex roams; the same goes for Eurasia.


It now looks like the ridge that interrupts the polar vortex will pop up in the area around Greenland, and this is good news for winter weather folk in the East. With the polar vortex splitting and a piece apparently dropping down into Canada, it only makes sense that a strong ridge will form in Greenland to counteract the deep negative height anomalies of the vortex. Ensembles have started to back off on this negative North Atlantic Oscillation (top), and also the Arctic Oscillation (bottom) in terms of how negative they will get, but I'm pretty sure they will end up more negative than neutral, as the ECMWF ensembles show above.

There are the usual caveats of long range forecasting in play here, along with a few other extra items that have not been mentioned. However, as long as the +AAM anomalies do their thing, and the stratosphere responds as it is expected to, I see a possibility of some cooler weather coming in for December. No word yet on how cold, but with a portion of the polar vortex in Canada just a few hundred miles from the US border, I would expect that colder weather to have an effect on the US as well.

Andrew
By Andrew at 5:19 PM 7 comments: Links to this post