New data concerning the monthly averages of sunspots has come in for October, and the results show a spike in sunspot values for that month. If we go by the acknowledgement that sunspot spikes precede a warm weather trend by 2-3 months, it's possible we see a solidly warm start to winter, possibly extending beyond December.

As the graph above shows, sunspot values jumped up for the month of October. While they are still below normal in the grand scheme of things, my concern now is that we see a decisively warm start to winter. For an example, see the fall of 2011 in the graph above. A very similar situation unfolded- a spike in sunspot numbers in October preceded the winter of 2011-2012, and we all know how that winter actually ended up. I'm not saying this winter will be like 2011-2012, but this sunspot spike does increase the potential for a warmer winter. 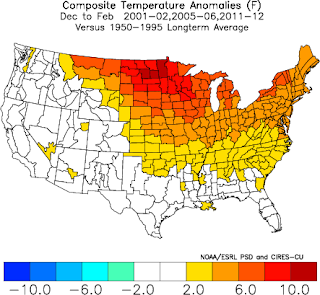 The chart above shows a composite of winters following a spike in sunspot numbers. This chart tells the story, with a clear trend for warmer weather over much of the United States as a result of these sunspot spikes. To fit the criteria, the winters of 2001-2002, 2005-2006 and 2011-2012 were picked solely as a result of the fall spike in sunspots, with other atmospheric patterns (i.e. ENSO, PDO, AMO etc.) not taken into account. That said, the aforementioned patterns, among many others, will alter the temperature pattern for this winter. But this composite does give us an idea of the potential consequences of a fall spike in sunspots.

Andrew
By Andrew at 5:24 PM 6 comments: Links to this post