This is an ENSO update provided by The Weather Centre.

Recently, we have been seeing the La Nina weakening. It was, after all, an expected occurrence, predicted weeks, if not months, in advance. However, in the last couple weeks, we have seen significant warming of the eastern ENSO monitoring area, shown in the above animation.

For those that are unfamiliar with how the ENSO phenomenon functions, it involves a cool or warm phase. the cool phase (La Nina) is characterized by cool water anomalies in the center of the image. The warm phase (El Nino) involves warm temperature anomalies over the center of the image.
La Ninas are known to bring above normal precip. to the Ohio Valley, while El Ninos favor the Northeast for winter snowstorms.

While warming is typical in the ENSO monitoring area during summer, no matter the phase it is in, this seems unusually early for warming to occur. If that stands true, this may be the sign that an El Nino is quickly trying to take hold.

For those wondering about next winter- I don't want to reveal too much, but historically, bad winters have preceded good winters, in terms of snowfall.
My first preliminary winter 2012-2013 forecast will be issued in a few months (the one out now is simply an overview).

Much Above Normal Temperatures Continue Today 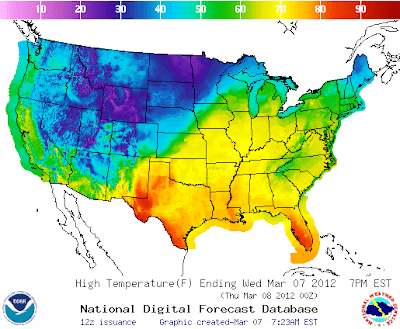 Here's the temperature departure forecast for today. Using the attached scale, we can see that the Northeast will be, by far, the most above average today, with temperature anomalies exceeding 30 degrees above average near the Great Lakes in New York.

-Andrew
By Andrew at 6:45 AM No comments: Links to this post