*HUGE* Snowstorm In The Works for Midwest, Northeast??

The 12z ECMWF is showing a very strong storm in the Ohio Valley at Hour 216 of its latest 12z run. Current indications are that this low could be as strong as a 992 millibar storm system (extremely low, for those who do not know). In the image, we are seeing a deep arctic outbreak behind the system, with a warm sector of air being pulled north, making for a potential severe weather threat.

The NAO will be something to watch as well. 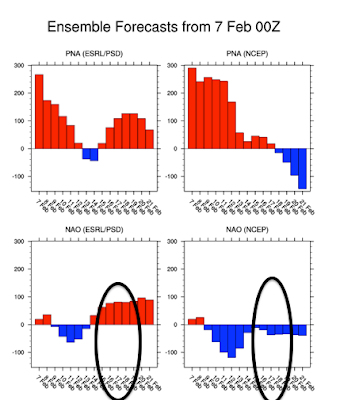 The areas I have circled is the timeframe for the storm. Notice how the NCEP and ESRL/PSD differ on the storm. Personally, I am wanting to go with the ESRL/PSD, as the NCEP is basically just the GFS/GFS ENS. I don't exactly know what the PSD uses, but it appears that there is definitely some different algorithms than what the NCEP uses, as shown in the difference of the forecasts.
As seen, a -NAO brings a cold and snowy pattern over the northeast as a Greenland Block forms (high pressure over the Greenland region). The opposite happens during a +NAO.
The PSD Ensemble members are also showing this storm, which to me is a big boost to confidence. Again, I don't know what the PSD uses, but it is different from the NCEP. The PSD sees the storm impacting the Great Lakes/Midwest region, but then carries the storm into the Northeast, whereas the ECMWF brings the storm system into the Canada. At the same time, both the PSD/ECMWF are very similar to their solutions to the storm system. Again, very encouraging.


Some reminders about this storm:
•It is still in the very long range, and thus subject to major change.
•This is in no way set in stone.
•Snowfall amounts are widely varied run-to-run of GFS.
•PSD/ECMWF combination is a very good sign.

Any questions can be asked below.
~Andrew
By Andrew at 4:09 PM 19 comments: Links to this post

Why I think Winter is Still On, and Why I originally posted otherwise

By now, if you commonly read The Weather Centre blog, you've found that I am giving up on winter.
I want to issue a sincere apology to everyone on my sudden turn from what I had been saying. I can't really explain what provoked me to call for an end to winter, but I know now that may original calls of winter still on its way remain alive and kicking.

I'm afraid I cannot reveal the reasons for this, as I am just beginning to unearth other things that will be worthwhile in determining this year's rest of winter forecast.

Again- I am sorry for quickly changing my mind. I don't like to go with the models (which flip practically every run), but this time around it seems like I acted like the models do.

Favorable/Unfavorable for the Rest of Winter (and a side note)

Favorable
MJO: It is currently looking to move into Phases 8 and 1- good for storms and cold.
AO: The long range AO looks to be going back negative.
PDO: The PDO Is in a cool phase, thus increasing probabilities for precipitation and cool temperatures in the East US.

Unfavorable
AAO: In a moderate-strong positive phase and does not appear to be changing anytime soon.
AO: A blip into positive territory shows that this new -NAO/-AO pattern is not as strong as it was a couple weeks ago.
NAO: The NAO will remain around neutral for a while.
PNA: The PNA is trending negatively in the longer term.
EPO: The EPO is going neutral, thus moderating temperatures.
WPO: The WPO looks to be positive, keeping Canada warm and cold air out of the picture.

Side Note: I haven't exactly been forecasting the way I usually do in the past couple days. It has not been shown on here, other than the throwing in the towel for winter.
I wanted to say that I did that in the wrong mindset, and after looking at all of these indices I have determined that I will be holding my verdict on the rest of winter in hiatus until possibly this afternoon, when I have more time to get a fresh look at all of the outlooks and indices, etc.
By Andrew at 6:45 AM 3 comments: Links to this post