This is the snow depth forecast for the upcoming winter weather event for the Northeast. The above image is the total accumulated snowfall until December 2nd, and, as you can see, the Northeast gathers some accumulation, with totals ranging from under an inch right along the coast to as much as 6-7 inches in northeast New York. Vermont and New Hampshire also look to get a few inches of accumulation, with the most snow being right near the border.

The system doesn't look to be too strong, so the event will not last that long. The snow will likely begin around the early morning hours of the 1st, so no significant travel impacts are expected. However, it appears possible that airports in the region may have some slight delays. The early rush hour may start off slow, but generally no troubles.

Andrew
By Andrew at 11:50 PM No comments: Links to this post

Email ThisBlogThis!Share to TwitterShare to FacebookShare to Pinterest
Related: Northeast

A snow event looks to take place over the Northern Plains on November 30th. The above image, courtesy WeatherBell Models, shows radar reflectivity forecasts from the NAM model. However, this is a reflectivity 4-hour streak, meaning it combines a 4 hour span of radar return forecasts into one image. This image shows where the heaviest snow will strike, which appears to be North Dakota.

Some snow may also fall in Minnesota and Wisconsin , but the main event will definitely be in North Dakota. I anticipate snow amounts to add up to 2-5 inches, centered in northeast North Dakota. The central part of the state will receive a messy slush, as a rain-to-snow event occurs with this system. Devils Lake and Grand Forks are most likely to see the best accumulation (the former location over the latter), while Jamestown and areas in the northern part of James River will see a more rain-sided event with snowflakes mixed in the further east you go.

This event is likely to start in the middle of rush hour as rain and transition to snow by the end of the rush hour period, approximately 6-7 PM central time. Snow will fall into the very early hours of the morning, and end by the 10 AM central hour on November 30th.

Andrew
By Andrew at 10:27 PM No comments: Links to this post

Email ThisBlogThis!Share to TwitterShare to FacebookShare to Pinterest
Related: Plains

I am officially opening up the discussion on a potential December 10-12 storm system that has been in many of the last couple days of the GFS model forecast.

For quite some time now, the GFS model, as pictured above, has been projecting a strong storm system to develop in the Plains and move northeast and strengthen, in a path all too familiar to those that went through the 2011 Groundhog Day Blizzard. This particular image above is of the 12z GFS for December 11th, depicting a strong storm system in the top right image. Precipitation in the bottom left image is widespread, with much of the Midwest getting snow while the Southeast is hammered with rain and storms. But first, let's determine the likelihood of such an event even happening.

It should be noted that 9 of the last 11 GFS model forecasts have had this storm system- a good sign as far as reliability goes. 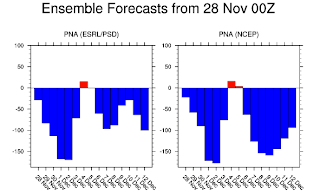 This is something called the Pacific-North American Index, or PNA. In positive phases, storms are directed at the Midwest, like the above example shows, and negative phases generally induce warmer spells over the East US and storms diverted to the Plains or Deep South. These two images are separate forecasts of the PNA, with the left image being from the ESRL/PSD agency and the right image from the NCEP, essentially the GFS Ensembles. Because the NCEP is just composed of the GFS Ensembles, I favor the ESRL/PSD ensemble forecasts. That agency has the PNA just as negative as the NCEP, but has the index spike around December 8-12 to only weak negative values, which would help out this storm system into taking the track the forecast at the top of this post is showing.

However, when I take a look at the individual 12z GFS Ensembles for this same timeframe, it occurs to me that sometimes, you can't trust forecasts like these. The ensembles have a strong ridge over the northeast Pacific and West Coast, typical of a positive PNA. While it is not necessarily a positive PNA, it is apparent to me that such a set-up could indeed support a storm of this magnitude and track.

Also enhancing my investigation into this particular storm is the West Pacific Oscillation (WPO) and East Pacific Oscillation (EPO). These two indices affect the Bering Sea, which is currently experiencing an Omega Block. An Omega block involves a high pressure forming in any given area. In response to the sudden increase in height anomalies (a.k.a. the formation of a high pressure system), a stormy pattern develops in the immediate vicinity of the high pressure system, forcing height anomalies down on either side of the high pressure system. This creates the Greek symbol Omega (if you were to look at the 500mb height chart), hence the name 'Omega Block'. The WPO/EPO, both of which affect this block which just happened to form in the Bering Sea, are looking to be on the move near this storm's potential occurrence.

The EPO looks to be more or less positive during the storm's potential arrival. Such a solution would mean that a disturbance would try to form over the Bering Sea, thus hurting the high pressure system stationed over that body of water. If we want cold weather to enter the nation, it is an absolute must that we get that Omega block out of the Bering Sea, and this positive EPO could be helped by the WPO. The WPO index is looking to be trending to weak negative territory by the middle of the second week of December, which is when we could expect this strong storm system to hit. This more positive trend to the WPO also enhances the atmosphere to attempt and create a stormy pattern in the place where this Bering Sea Omega Block is.

The 12z GFS Ensembles have the Omega block retrograding north into the Arctic Circle, which would weaken the polar vortex and help cold air flow south. If such a solution were to happen, I see little reason to why we should give up the second half of December.

All in all, keep your eyes peeled. I'm seeing changes in the teleconnections, and when you get changes in the teleconnections, it's not all that difficult to see a brief stormy pattern as the pattern shifts from one phase to another. If the WPO/EPO/PNA forecasts verify on their forecasts as shown above, there could indeed be potential for a storm like this to blow through. Encouraging signs are also emerging from ensemble and model forecasts, as shown above by the GFS/GFS Ensembles.

Andrew
By Andrew at 5:34 PM 5 comments: Links to this post

An article connecting temperatures in October and November to the following 3 winter months (December, January and February) seems to have proved the long-held theory that fall trends can influence the upcoming winter.

The correlation is cited in the summary of this article:


In summary, temperature at the Blue Hill Observatory during October-November
correlates to some degree to the following winter temperature more than half the time, with an
overall correlation of 0.45 and with much higher and much lower correlation over some ten-year
periods during the 20th century. Both precipitation and snowfall, which are much more highly
variable than temperature, are in general essentially uncorrelated between ON and the following
winter, though some correlation is occasionally apparent over some years due to random
variations. As a result, ON precipitation and snowfall provide little predictive capability of the
subsequent winter precipitation and snowfall. Although ON temperature appears to provide some
prognostic information about the following winter temperature, the extent to which the
correlation is effective very likely depends on the specific atmospheric dynamical processes than
dominate the weather conditions during particular fall and winter seasons.


0.45 may not seem like much, but that's saying that, out of 100 winters, 45% of those winters had temperature connections to the previous fall's temperatures. That's a pretty significant correlation. Let's take a look back at our October 2012 temperatures to see what we could see this winter.

This map showing October 2012 temperatures displays a very below-normal October was observed, especially across the Ohio Valley, Mississippi Valley, South Plains, Central Plains and Northern Plains. It does appear that the Northern Plains achieved the lowest temperature for the month of October- a good sign for the coming winter if you like cold weather.

Of course, this article mentions October AND November, so I would like to see November temperatures before I make a conclusion on what fall temperatures could mean for this winter.

Andrew
By Andrew at 4:41 PM 2 comments: Links to this post 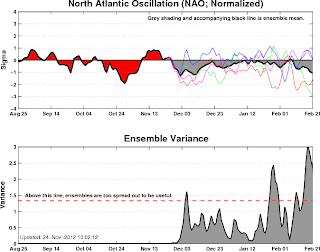 This is a long range NAO forecast from the Univ. of Albany. The top image shows the observed NAO values in red, and the forecasted NAO index in gray. The colored lines are separate ensemble members. The bottom line shows the variance, or difference between the ensemble members at any given time in their forecasts. Any spike of gray above that dashed red line indicates that the ensemble members are too far apart to be useful in a forecast.

Looking ahead into mid and late December, it seems that all but 1 ensemble member are forecasting a strong negative NAO. Considering it's only one ensemble member against 3, I support the idea of a deep negative NAO through December. Into January, we see the ensemble members regulate themselves, which seems a little too conservative to me. If Siberia's snow cover in October comes true, the AO will be negative, and the close relationship between the AO/NAO tells me that the NAO is more likely to be negative like the AO will probably be in mid-late January.

February brings the ensemble members going every which way, so I don't feel like it's a good idea to decipher that month until the ensemble forecast members have settled down. Despite this February uncertainty, the other two winter months certainly are looking supportive of a cool and stormy Northeast and general East US.