The Storm Prediction Center is outlining a severe weather threat for January 9, 2013 in southeast Texas. This includes the cities of Houston and Corpus Christi. Let's see what will be causing this severe weather situation. 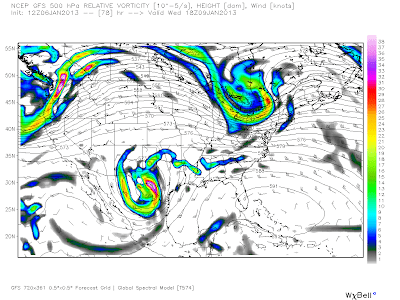 A storm system is currently digging into the Southwest as a positively-tilted system, meaning the highest vorticity values are tilted towards the southwest. As the storm moves along the US/Mexico border, it will turn from a positive tilt to a neutral tilt, and eventually a negative tilt as seen above. When you get that negative tilt, colder air flows in the upper levels of the atmosphere, leading to increased instability over the region within the warm sector.

The models are still uneasy on this system, but what is agreed on is the presence of either a negatively-tilted storm or a closed low. Either one can create significant precipitation and a severe weather situation. The ECMWF model is showing a closed low, whereas the GFS model above has the negative tilt within the system. This slight difference could be a huge game-changer for this severe weather set-up, whether it's a bust or an outbreak.

At the moment, I think this event will have a fair severe weather potential, but the lack of strong upper level winds and only moderate lower level winds, I expect this to be a more low-end severe weather event, not as big as it may seem. Model uncertainty only adds to my lack of confidence. 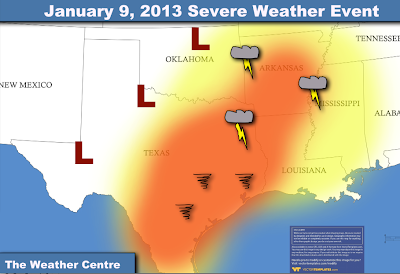 Andrew
By Andrew at 4:01 PM No comments: Links to this post

What Will Happen After The Polar Vortex Collapse?

We'll start with observed conditions. The graph above shows North Hemisphere snow cover anomalies. There is a proven correlation between the anomalies of snow cover in the North Hemisphere in October and the Arctic Oscillation's phase in the following winter. As you can see, the first half of October brought below normal snow cover, and the month of December brought warmer than normal conditions across much of the nation. Now we're looking to the second half of October to predict what temperatures will be like for the rest of winter. The second half of October looks to have above normal to very above normal snow cover, meaning we could see the Arctic Oscillation blow its bottom out later on in winter. This bodes well for the predicted collapse of the polar vortex and the effects being felt in late January and through February.

Speaking of the Arctic Oscillation, let's look at the forecasts for the AO and the North Atlantic Oscillation (NAO) from a couple of big models. 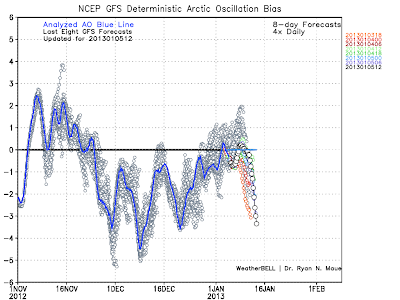 The Arctic Oscillation's forecast from the GFS model shows the index bombing out into extreme negative territory- and that doesn't even cover the full extent of how negative the AO could get. When the AO goes negative, the polar vortex is naturally weakened and cold air will make a good push to go into the US. However, in cooperation with the multiple sudden stratospheric warmings (whose effects will be seen in late January), the Arctic Oscillation has a good chance to be tanking to an extremely negative area. That would most likely happen beyond January 20th. Again, Siberia supports a tanking Arctic Oscillation, meaning this forecast of a strong negative AO is not nearly off the table. 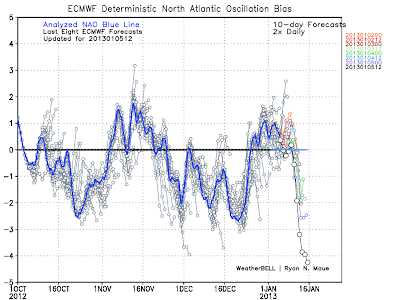 This is the ECMWF's forecast for the North Atlantic Oscillation (NAO). The model is projecting the NAO to be in a very deep negative phase, below the -4 value, which is extremely negative. In the negative phase of the North Atlantic Oscillation, the jet stream buckles to bring cold and storms specifically into the Northeast US and New England regions. Such a negative NAO would indicate that  cold and snow would be provoked to move east as soon as the negative PNA relaxes and the high pressure commanding the East US leaves the region. If such a strong negative NAO is still around post-January 20, some serious cold could bleed east into the East US, whereas a negative PNA could pose a significant barricade to the cold getting to the East right away. It will certainly get there, but it could be held back a few days due to the persistent negative PNA.

The ECMWF above is projecting potential vorticity (PV) values for the Day 10 forecast timeframe. Raised PV values suggest the presence of lower pressure, in this case the polar vortex. The polar vortex has split into two pieces at this point, with one over southwest Canada and the other in Eurasia. The polar vortex is severely decimated at this point, meaning a large amount of the cold previously held by the polar vortex must now be released, because it cannot be held by two smaller and weaker polar vortices.  Furthermore, a third sudden stratospheric warming is in the forecast, and if such a warming strikes in the perfect place, I find it likely that both vortices will be unable to sustain themselves and may dissipate completely, flooding the lower latitudes with Arctic air.

Models agree that the long range includes good chances for strong cold entering the nation, as shown in the GFS Ensemble temperature departure forecast in the first image below, and the CFS weekly forecast in the second image below.

After the polar vortex collapse, it's looking very cold for the end of January, supported by Siberia, the forecast models, and the stratosphere itself. When the end of January does come around and the US does not experience anomalous cold, I will be extremely surprised. I highly doubt the cold will miss the US; things are looking positive for a sharp Arctic outbreak in the nation, possibly persisting through February.