Invest 92 has formed in the East Pacific, and the National Hurricane Center has identified this invest with a 40% chance of tropical cyclone development in the next 48 hours.

Satellite imagery indicates this invest is rather healthy, with multiple areas of enhanced thunderstorms to the south of Mexico. Some of these thunderstorms are even spreading onshore, and this could be a sign of where the invest will eventually end up. For now, no significant circulation is detected by satellite feed, although continued development and dissipation of thunderstorms is clearly shown. If any development is to occur, it would likely start with the southern thunderstorm complex, where storm development is most stable. 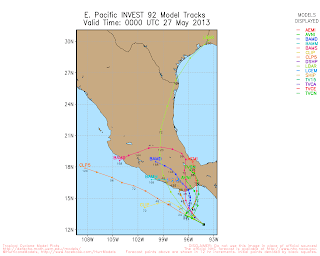 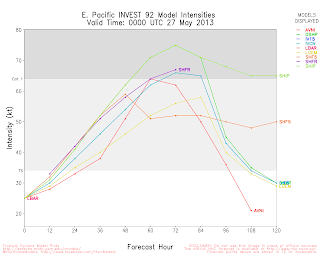 Model guidance is showing my main concern with this invest, as current projections have the tropical invest moving almost due northward into Mexico. The consensus is certainly for a landfall into Mexico, although the model spread going towards Mexico is enough so that I am not willing to formally declare a landfall is likely. I do believe, however, that there is a pretty good chance we will see cyclone development and landfall. I say cyclone development because the intensity forecast image below the tracks shows all guidance agreeing in Invest 92 strengthening into a tropical cyclone. A few models even go to bare-bones Category 1 hurricane status, but I believe we will cross that bridge when we get to it.

Andrew
By Andrew at 9:42 PM No comments:

I believe a multi-day severe weather outbreak is possible (if not likely) across the Plains and Midwest over the next 7 days.

The pattern really is primed for such a multi-day event. It begins with an unusually active upper air flow. The image above shows the projected upper air field for five days out. We see an unusually strong Pacific jet screaming into the West Coat above 130 knots at some points. This active Pacific jet will lead to a more active pattern in general for the United States, and will enhance potentials for severe weather.

As the Pacific jet stream amplifies, we will see a more meridional flow set up. If you don't recall, meridional flow is when the jet stream is very wavy and not in a straight line. We are expecting that type of upper air flow in the coming week. As this happens, a general low pressure trend in the West Coast should set up, leading to massive high pressure formation in the Central and East US. This type of synoptic set-up would not be all that different from the pattern that was present for the Moore, OK tornado event. Now, we can't predict if we will see EF-5 tornadoes, because it is practically impossible to predict tornadoes at any given time, unless you're predicting them as they happen.

For this particular multi-day event this week (the days themselves remain uncertain), multiple low pressure systems will be making their way onshore from the active Pacific storm train. A major difference we expect to see between the Oklahoma tornadoes and this upcoming week's potential is that the storms should be further north. I anticipate the Central and Northern Plains to get in on the action more-so than the Southern Plains. 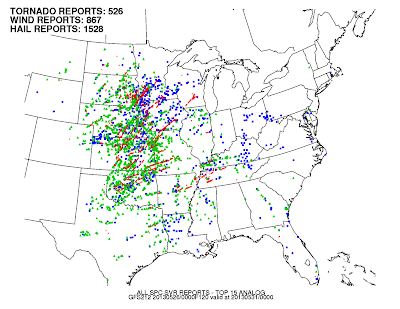 One thing that is very concerning is what the CIPS analog system is putting out. This map combines storm reports from 15 of the best analog dates (dates that have similar atmospheric features as a forecast period (in this case, 5 days away)) into one image. Looking at this image, it is apparent that this potential outbreak would most likely affect states from Minnesota into Oklahoma, but with eastern Nebraska into western Iowa and western Missouri into much of Kansas receiving the highest threat. Note that many of the tornado reports you see in red on the image above included F5 and F4 tornadoes, as this post from AmericanWx shows.

I don't really want to make a map for this week's potential, because I find it to be entering this post with a little too much uncertainty. However,

Andrew
By Andrew at 9:25 PM No comments: