There is an increasing potential for a winter storm in the Midwest, Plains and Great Lakes over the December 5-7 period.

A look at geopotential height anomalies over the middle of the atmosphere from November 28th into the 29th suggest that stormy weather was over East Asia, as evidenced by deep blue negative height anomalies. Using the correlation that indicates weather over East Asia is reciprocated throughout the United States just 6-10 days later, it is expected that stormy weather will be brought upon the US between the December 5-9 period. Model guidance suggests that this potential storm will occur between the December 5-7 period. 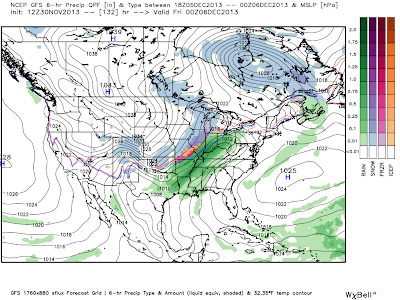 Model guidance systems from the GFS (shown above) to the Canadian GEM to the European ECMWF agree that this will not be a huge snowstorm for those that get snow. There is general agreement that a region from Missouri and Kansas to Michigan will get in on some snow for this storm system, with the states of Iowa, Illinois and Wisconsin also getting in on the action. 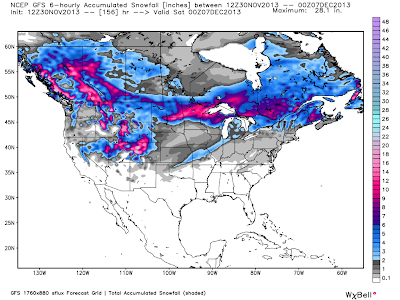 The GFS model's snowfall forecast for this system (shown above) is actually a bit south of other forecasts from the GEM and ECMWF, as shown below:

There is growing potential for a substantial winter storm to fall upon the Northern Plains and upper Midwest, possibly to blizzard proportions.

Reanalysis of the weather around East Asia reveals a storm system passed over the region on November 26th, resulting in the apprehension for the chance of a storm system for the nation between December 2nd and December 6th. This storm would appear to be related to that East Asian connection, where weather anomalies in East Asia can be reciprocated in the United States approximately 6-10 days later. Model guidance is now catching on to what may be a blizzard in the December 2-4 timeframe. 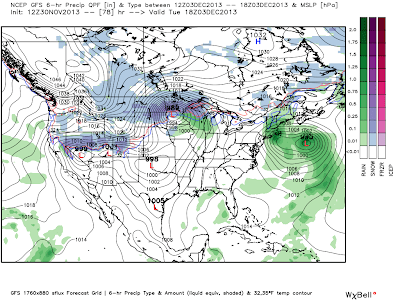 Precipitation type and MSLP projections for December 3rd, when this storm is at its peak, show very heavy snow impacting the Northern Plains, including the Dakotas and Minnesota, as well as the Upper Midwest (with Wisconsin and the Michigan peninsula included). The storm's minimum pressure looks to be in the 980 millibar range, which classifies this as a very strong storm system. This is confirmed by the tight pressure contour arrangement around the storm system. With the tightening of those pressure contours comes increased winds, and this is why my concern is shifting towards a blizzard threat. It remains to be seen if the criteria for a blizzard will be met, but based on current model projections, I wouldn't take that idea off the table. 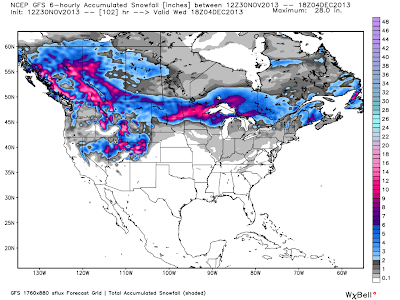 Snowfall amounts from this storm range from half a foot in far North Dakota to over a foot in southeast ND and a portion of South Dakota. Totals above the 12 inch mark are widely projected across Minnesota, extending into Wisconsin before a drop-off to the 6-12 inch range is seen across the Badger State. I'm generally anticipating amounts close to this forecast, as a system as strong as this one will be capable of producing some rather large snows.

Andrew
By Andrew at 7:44 PM No comments: Links to this post