It's looking more likely that we will see life-threatening cold weather end the month of January and kick off the month of February.

The whole cold weather sequence will begin with a wave breaking event over the far northeast Pacific and into the Gulf of Alaska. We can identify the placement of this event by the oranges and reds pushing north in that body of water. This wave breaking event translates to high pressure over those areas, and it is the resulting high pressure that will lead to the life-threatening cold weather outbreak in the last days of January and first days of February, possibly worse than the early January brush with the polar vortex.

Medium range ensemble forecasts (MREF) for the late January period confirm the big high pressure system forming thanks to the wave breaking, and as you can see, the polar vortex is nudged south into Canada and even the far northern Great Lakes to bring astonishingly cold temperatures back to the United States. 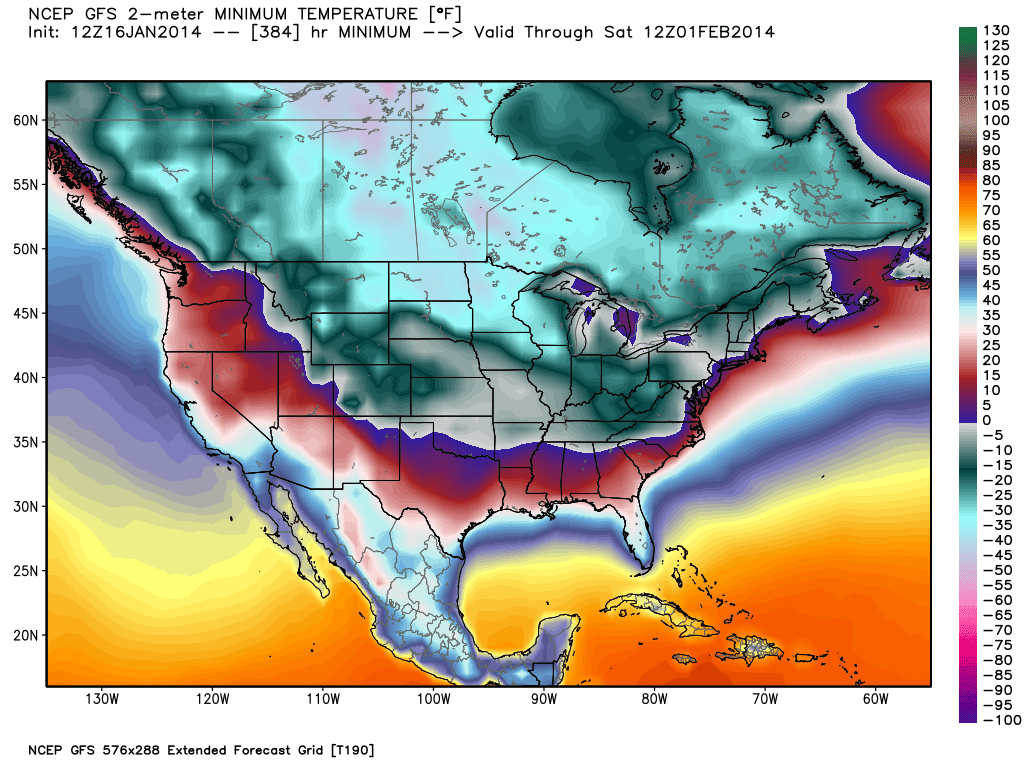 The image above shows minimum temperatures for the entire 12z GFS model run. That means the lowest temperatures forecasted for each area throughout the 384 hours that the model forecasts for are put on this image. We can see much of the nation is projected to dip below 0 degrees Fahrenheit at some point during the next 16 days, with the northern Plains trying to dip below -40 degrees. To be quite honest, I do feel that a solution like this is possible. The cold may not end up as extreme as this (hard to tell, because the GFS has a cold bias in its forecast, but it could also be this cold, as the weather pattern is extremely favorable for intense cold), but the gist of this all is that it will get pretty darn cold to end January and start February.

One thing I want to discuss is something I'm seeing on the GFS Ensembles two images above this sentence. If you look at the Pacific, you see that monster ridge of high pressure making the jet stream shoot way north. Then, in Canada, the polar vortex causes the jet stream to plummet back south. But then if we look at the United States, we see just regular west-to-east flow. No big spikes or drops in the jet stream. That raises a red flag to me. I'm not sold on the idea that an extremely meridional (wavy) flow just upstream will result in zonal (west-to-east, flat) flow here in the US. I believe that the polar vortex and cold would push further south and with greater intensity, similar to what the 12z GFS shows. I'm not endorsing that 12z GFS run, but I am saying that the GFS Ensembles look suspicious to me right now.