Why Naming Winter Storms Is a Bad Idea

Today, The Weather Channel announced that they will be naming winter storms throughout the winter of 2012-2013, much like tropical cyclones. I'm here to tell you why this is a bad idea.

This is not a government source.
This is coming from a third party source, no matter how official the people who work at TWC are. A third party putting their own names to winter storms under their own criteria is like a person telling the pharmacist what medication they will need without consulting a doctor.
The National Hurricane Center is the only government source that has a right to issue names to tropical systems in the Atlantic and East Pacific, yet other third-party sources (who will not be named) assign their own names.

Several parties assigning different names decimates information.
Let's make a hypothetical storm that has just formed in the Gulf of Mexico. It is a hurricane, and the NHC has named it 'Helga' (a random name used solely for informative purposes). However, The Weather Channel and other sources have named the storm 'Michael', 'Shirley' and 'Ollie'. How is a person supposed to identify a single storm when FOUR DIFFERENT names are being thrown around? What would you call it?
Are you able to keep track of four different names at the same time? Your answer should be no, as that would be like texting, shaving, brushing your teeth and driving all at once. Why should any source other than the government give out a name? All it does is severely decimate the informative process- I wouldn't be able to keep track of four names. If my life was at risk, whether it be from hurricane or blizzard, I wouldn't want to have to remember 4 separate names just to get information.

Winter storms don't need names.
Honestly. Why would you ned to name a winter storm? The blizzard that struck the Midwest in February 2011 did not have a name, and the storm worked out to be called the 2011 Chicago Blizzard in some aspects, also called the Groundhog Day Blizzard for others.
Are you really going to want to tell your friends and family 'The snowstorm Helga is coming! Hunker down!' If that sounds absurd, you bet it actually is. What conveys information better out of the following two statements:

To be honest, I have the utmost respect for The Weather Channel- they have some great meteorologists. However, this naming system strikes a nerve that tells me this won't work out. I have been surfing the web and found a general consensus that this is a bad idea. Again, I love those at TWC- it's some of the content that doesn't sit well with me.

Andrew
By Andrew at 6:40 PM 8 comments: Links to this post

Watching For Snow In The Northeast

Northeast weather birds are chirping up the potential for some snow in the next 10 days. This potential appears to hone in on the New York area, where a few inches may be observed. But first, is this scenario even possible?

The answer is YES.

The PSD, a branch of the ESRL (both of which deal with more technical aspects of weather), runs an ensemble forecast for the NAO, as well as several other teleconnections. This most recent NAO forecast is projecting a deep negative NAO only a few days before the potential snow maker would strike the Northeast. This gradual deepening of the NAO, beginning on October 4th, would ensure that a typical negative NAO pattern would be present by the time this possible system got close to the region.

Now, do I personally think it's going to happen?

Models have a tendency to over-estimate snowfall, and so far this year, the GFS has not performed well with long range snowfall. In the shorter range (120 hours and under), trust in the model greatly increases. However, 216 hours away is just a little too far for me to be comfortable in the scenario that the potential for snow is there. But, as I showed you, there is a chance based on the ensemble members of the PSD. It's a toss-up.

Andrew
By Andrew at 5:13 PM No comments: Links to this post

Positive QBO Values May Throw Wrench Into This Winter 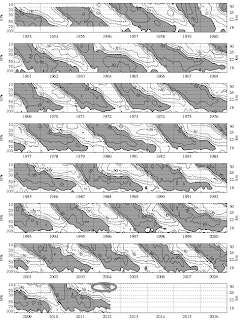 Latest analysis of the Quasi-Biennial Oscillation reveals positive values beginning to spread down to the surface from the upper levels of the atmosphere.


But before we analyze the QBO, one must know: WHAT IS THE QBO?
QBO (Quasi-Biennial Oscillation): The QBO is an indice measured in two levels of the atmosphere. These two levels are the 30mb and 50mb levels, and are measured by the direction and strength of winds in those levels. For instance, the POSITIVE QBO is found in WESTERLY winds, while the NEGATIVE QBO is composed of EASTERLY winds.

Recent measurements of the QBO at both the 30mb and 50mb levels are negative, indicating easterly winds. The presence of both levels recording negative values tells me this is not a quick change from positive, but a trend.

The QBO has a big impact on the North Atlantic Oscillation. Without getting into the technical stuff, just know that a negative QBO can help enhance the negative phase of the NAO.

The circled portion in the image above is pointing out positive anomalies, shown as gray across the image. White spaces indicate negative QBO values. Taking a look at the QBO, one can see that thee positive anomalies have been pushing down in recent weeks. Looking at history, this downward propagation of positive QBO anomalies may very well continue. If this propagation does continue, I would expect it to hit the 30mb and 50mb regions by the time winter rolls around- a bad sign for those who love snow.

BUT HOPE IS NOT LOST!

A lack of Arctic sea ice, combined with a warm AMO is helping to make the Arctic Circle much warmer than normal. This increased warmth could very well create blocking, possibly over Greenland, to create a negative AO. With luck, a negative NAO may also come to terms this winter.

This is only a small development, and I am not concerned at the moment. However, if winter comes and the QBO has flipped to positive, I will have to reconsider my winter thoughts.

For those not technical about weather: Expectations for winter remain on track as seen in my Official Winter Forecast. However, if this QBO index goes positive in time for the winter months, this snow potential may be changed for many regions.