In the wake of Sandy, another Nor'easter is projected to develop in the next 5-10 days. The above map shows 500mb winds for the time period that we are watching. The presence of such strong winds indicates that a strong low pressure system is in the area. What makes this situation even more interesting is how the system appears to be tilting to the southeast, or being negatively tilted. A negatively tilted storm typically includes more gusto in that it provides more severe weather potential in the summer, and thus heavier precipitation potential in the winter. But, will this actually put down some of the whit stuff? Let's take a look.

The precipitation forecast for the same time period as above shows pretty low amounts of precipitation across the Northeast as the system slides to the east. This isn't too interesting to me, and I can't really say I believe it. We are dealing with a strengthening storm system, this should have more precipitation than this model is showing.

This is a thickness forecast at the 1000-500mb level. This map is best used to identify the rain/snow line. Snow would be expected north of the dark blue line labelled 540 (or 5400), and rain would be located to the south of the line. If we compare the precipitation chart to this thickness chart, we see that the air mass behind the Nor'easter would appear to be favorable for some snow. However, models have been known to take a cold bias in the fall, and thus my confidence in such a favorable environment for snow deteriorates.

This will be interesting to watch, but I don't have enough confidence to make a call just yet.

Andrew
By Andrew at 4:59 PM No comments: Links to this post 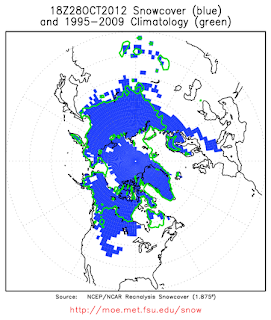 Northern Hemisphere snow cover is running well above normal on this Halloween 2012, as recent building of snow across Canada and northern Russia adds to the above normal count.

You're probably thinking: Why should I care about Siberia?

Well, studies have proven that October snowfall in Siberia correlates well with winter conditions in North America. These studies have shown that, in above normal snowfall cases in Siberia, a negative Arctic Oscillation, or AO develops. This negative AO provides a base for cold air to drop into the United States. In a positive AO, warm air holds its ground in the Lower 48.

However, it appears that only October matters for this theory. Last year, snowfall was below normal in October yet above normal in November. As the studies indicated, warm air was then favored across the Lower 48, and this forecast did indeed verify.

Now, in October 2012, we found ourselves with the following:
-Slow start to snow cover in early October
-Gradual building of snow cover in mid October
-Burst of snowfall in late October

If we apply this to the correlation with the Arctic Oscillation, one would think that this winter will start out on the warm side, before gradually turning cooler. Late in the winter, it would be expected that a very frigid air mass would enter the United States and make for a brutal end of winter. However, because this is just one puzzle piece in an extremely complicated puzzle, this is in no way set in stone, nor is it my forecast. This is what would be expected to happen if this theory were the only factor that forecasted this winter.

Andrew
By Andrew at 3:38 PM No comments: Links to this post

After the devastation Superstorm Sandy caused across the Northeast, many are likely to be wary when I say that a general stormy pattern looks to take hold across the region. The ECMWF ensembles, shown above in a 500mb height anomaly chart for the next 6-10 day period, shows a ridge building across the West and a stormy signature in the East.

This is shown in model forecasts as coming in at least two systems, which could both hold the potential for some flying snowflakes, however that has yet to be nailed down as a possibility.

Something that is puzzling to me is the lack of a clear negative NAO signature, something that commonly defines a stormy Northeast period. Instead, Greenland seems to be in between a ridge in the south and a stormy pattern to the north. Additionally, other ensemble forecasts are playing out a positive PNA heading negative and a negative NAO heading positive, both of which bode well for a storm track away from the Northeast.

Despite these unknown elements, I believe that the ECMWF Ensembles are on track with this forecast, as other models are showing very similar conditions to the scenario depicted above.

Andrew
By Andrew at 3:24 PM No comments: Links to this post