There are some stronger storms ongoing in the southwest portion of South Dakota this evening.
Some things to note are a slight hooking motion in some portions of the stronger storm cell cluster, and how the potential for hail is rising.

The image above is VIL, which, in the case where the number is higher, the likelihood for hail and bigger size the hail may be. We see a very high number in the storm cell cluster in the right portion of the radar.

These storms have also been dumping quite a bit of rain, with hourly rainfall totals coming at over 1 inch.
There is a severe thunderstorm watch over the area for these storm cells as well.
By Andrew at 9:45 PM No comments: Links to this post

Good morning everyone, this is your morning Tropical Cyclone discussion. We have 2 systems to discuss this morning, let's start off with the system in the Gulf of Mexico to the west of Florida.
That system was mentioned in last night's broadcast as probably not going to make anything of a tropical cyclone. That does seem to still be the case at this point. Showers and thunderstorms have deteriorated in the system, leaving the low with a near 0% chance of becoming a tropical cyclone.
Models and ensembles are available for us to use, instead of them being taken down like yesterday. We do apologize for that. However, we have found the same ensembles, except we can use them on here. 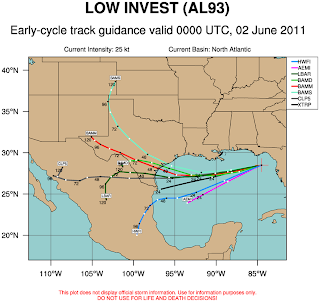 The ensembles above are still printing the same picture as yesterday, but the exception is how there is less of a consensus, with some models now taking the storm way south after landfall through Central Mexico. I cannot give an official take on this system, but from past ensembles, I would think that it is a fairly good bet to have the low make landfall in South Texas. 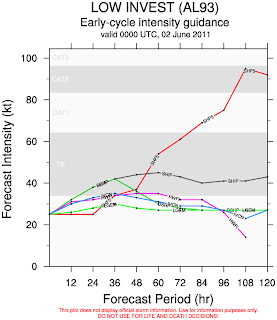 The intensity forecasts above are very different from yesterday. While the consensus is still to have the storm just under tropical storm status, one particular model that we have mentioned in every discussion keeps getting stronger with each ensemble run. The SHF5 model in red now points towards a Category 2 hurricane forming from the system about 5 days out. While that model has been forecasting that for at least 3 runs, I wold prefer to keep the storm forecast more weaker.

Now, let's go back to the system down near Central America below.

The NHC has outlined that as unlikely for this system to get any development over the next 2 days. However, there definitely is potential for development after that 2 day period.
Unfortunately, we do not have ensembles for this system as it is not considered 'active' yet.
However, you can stick with The Weather Centre for more daily, in-depth information about tropical cyclone developments.
Plots provided courtesy of Jonathan Vigh, Colorado State University.
By Andrew at 6:49 AM No comments: Links to this post