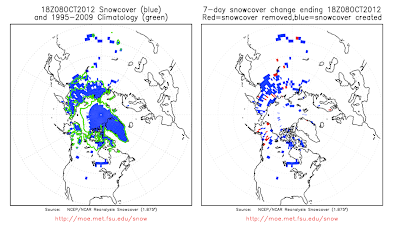 Latest data from Florida State University indicates that snow cover over Siberia, Russia is currently above normal, with much of the region under some snow cover.

On the right is current snow cover in blue, superimposed with typical snow cover for this time of year, outlined in green. Right now, much of Siberia is supposed to be under snow cover. And, as you can see, blue colors exceed the climatology lines, indicating an abundance of snow cover in Siberia.

Considering we appear to be off to the races a little bit more than normal, this bodes well with both my forecast and the hopes of many snow lovers this winter. I will be tracking Siberia through October to help me forecast the rest of winter.

Relief From Cold Weather In Sight 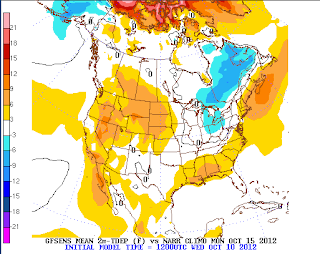 There is relief from the unseasonably cold weather in sight, as the latest models are showing a warm up surfacing for much of the nation at the start of the upcoming work week.

The GFS Ensembles are showing temperature anomalies of up to 9 degrees above normal in spotty parts of the mountains out in the Rockies, with widespread 3-9 degree anomalies swarming over the general western half of the nation. This warm weather is reciprocated in the Southeast, where Gulf Coast cities like Biloxi and New Orleans may get in on temperatures up to 6 degrees above normal.

However, cities in the Northeast will not be as lucky. While coastal cities will receive a boost of a few degrees above normal, the central Great Lakes looks to stay a few degrees below normal thanks to the exiting cold shot.

Most of you should be able to put away the heavy jackets for a day or two and enjoy temperatures in the seasonable range.