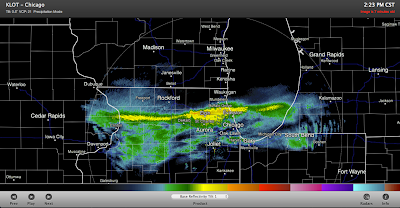 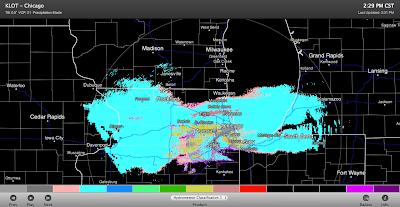 Radar and observations are indicating that the changeover from rain to snow has happened. It was supposed to occur this evening, but now that it has changed over, I do anticipate snowfall accumulations to be higher than what is being shown on the models right now. In order for the models to recognize this unexpected changeover, I recommend not using the short range models until the 20z (2:00 PM CST) runs, which by then should have detected the early changeover.
By Andrew at 2:39 PM 7 comments: Links to this post

I am concerned about the tornado threat in North Kentucky today. The Storm Prediction Center has outlined Kentucky, Tennessee, north Georgia and north Alabama, South Ohio and South Indiana in a slight risk of severe thunderstorms.

The GFS's forecast of the jet stream shows the Southern Jet and main Mid Latitude jet stream trying to intersect in Oklahoma. Notice how both jet streams back away from each other in Kentucky. When jet streams are forced away from each other (they would have come together in Oklahoma and stayed together through the rest of the country), it indicates a massive rising of air. In other words, a lot of instability in the atmosphere. Diverging jet streams are usually seen in the Spring and Summer with more powerful storm systems.

Here is a hodograph. A hodograph is basically a tracer from the area it was released to the upper points of the atmosphere. A hodograph is attached to a radiosonde, which is the instrument sent up that is attached to those big weather balloons. Anyhow, when a hodograph comes back in a circular formation, it means that there is some form of rotation action occurring in the atmosphere. We can see a half circle shape in the lower parts of the atmosphere. (The height is characterized by the distance from the first point, which in this case appears to be the dot on the left half of the image.)

Well this is a whole new ballgame now.

It was only yesterday I was discussing how the storm would probably drop a few inches in Chicago, with some more in Detroit. Now take a look at Intellicast's 48 hour Snowfall Forecast.
So last night, it turns out the NWS Chicago office issued a winter storm watch due to a sudden increase in snowfall forecasts. The Chicago NWS office is calling for a bigger swath of 6+ inches than Intellicast, but their graphic system appears to be having problems right now.

The system itself really is a clipper system, but is a very strong one. Alberta Clippers, commonly shortened to be called Clippers, are weak, fast-moving storm systems that drop from Alberta Canada. The system is moisture starved. That, combined with the progressive speed, leaves the storm to put down a few inches in a typical situation.

We will keep you up-to-date as this sudden snowstorm begins to take shape.
By Andrew at 8:07 AM 10 comments: Links to this post