Yet another snow event is possible for the East Coast, with this next threat coming in the February 15-16 period.

The GFS model indicates we will see another trough develop in the Southeast, with an uncanny resemblance to the storm we are currently fighting through along the East Coast. The GFS sees this storm coming about as a result of the strong-yet-suppressed ridging in the West US, which leads to a west-northwest or northwest flow across the US, a favorable pattern for East US snow events. 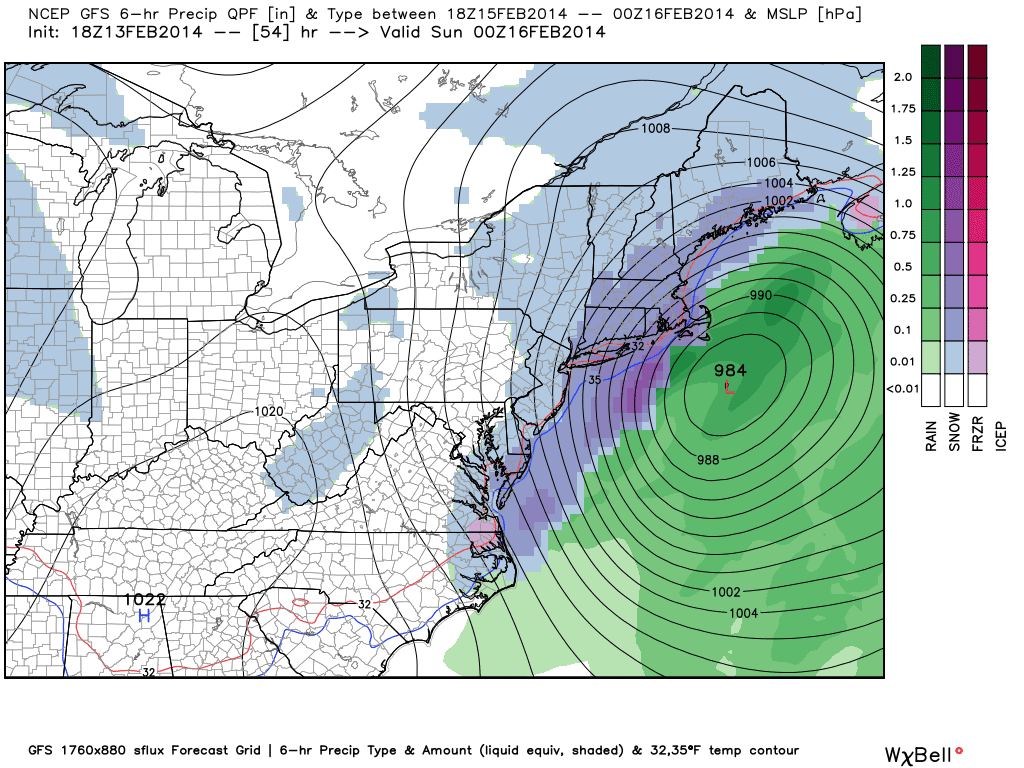 The GFS model brings a 984 millibar low pressure system along the waters just off the East Coast, dropping snowfall in the eastern portions of North Carolina, Virginia, Massachusetts, Maine, and all places in between. This snapshot, valid on the evening of February 15, shows the heaviest snow staying offshore, but moderate snow still being able to impact the easternmost parts of the Northeast. As of now, accumulations for regions up to Maine look to be in the 2-5" range. 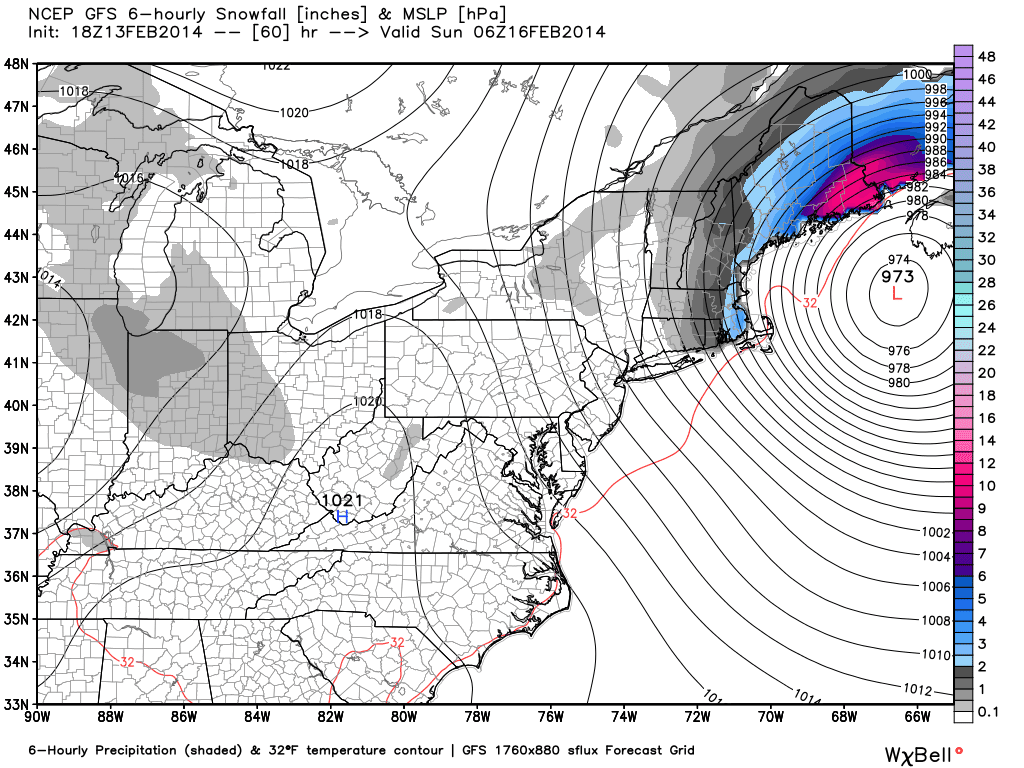 The storm system really gets going when it approaches Maine, with the MSLP for this storm clocking in at a minimum of 973 millibars. We see 6 hourly snowfall amounts in eastern Maine approaching 12", which would average out to 2 inches per hour for those 6 hours overnight from February 15 to 16. Now, heavy snowfall doesn't fall for 2 inches an hour at that steady rate- my guess is that we would see a period of intense snowfall rates (i.e. 3" an hour not unreasonable) with some lighter snow rates mixed in.

Only a slight shift west or east could flip the forecast- stay tuned for more details about this potential snowstorm.

Andrew
By Andrew at 4:53 PM No comments:

Model guidance is latching on to the idea of a severe weather event in the February 22 to 24 timeframe.

The GFS model brings unseasonably warm temperatures north on February 22nd, as the graphic above shows. Projected temperatures range mainly in the 60s and 70s, where the warm sector is exerting the most influence. We see the cold front clearly defined, stretching through the Plains and Upper Midwest, with the warm front pulling that warm, moist air far to the north in what would likely be a set-up for the first severe weather event of the season.

Jet stream analysis from this same GFS model shows the storm system positioned in Wisconsin as a strong 988 millibar low pressure system. We see a jet streak in the 130 knot range positioned to the east of the trough, indicating the storm has become negatively tilted and is expected to continue lifting north and east. These strong jet stream winds, combined with the warm and moist air (containing up to 1.6" of precipitable water across the warm sector), would likely produce a severe weather event. The negative tilt of the trough, shown below, would further enhance severe weather prospects.

The negative tilt of the trough, shown best when maximum vorticity values are positioned on the eastern side of the trough and contour lines seem to be pressing in a southeast direction, indicates that the storm system has reached maturity, and is therefore more able to produce significant weather. In this particular case, with temperatures only projected to be in the 60s, PWAT values to only be around 1.6", and the jet stream maxing out at 130 knots, I wouldn't be holding my breath for a big severe weather outbreak. However, this solution looks good for at least some severe weather.

The 700mb winds and vorticity chart for February 12th shows us that lower level winds will be reaching into the 40 knot and 50 knot range, which, while not all that impressive, solidifies my concerns that this may still be a severe weather event, albeit not as intense as a full-out "outbreak".

Because this event is still in the long range, model guidance will inevitably change with this storm system. It is possible we don't even see a severe weather event at all, and it's also possible the severity of this event increases as we get closer to the event. I would bet my money more on the weakening prospects, as the atmosphere still looks a little 'wintry' to me, if you will, and doesn't seem all that conducive for a big severe weather event.