Note: This is a new idea I had for delivering text-based messages about long range risks (varying by season) to the public. This is an example of what would be issued (while it's an example, the information is an actual forecast). Feedback is welcome.

Severe Weather Outlook: Low/Medium Activity
Closed low entering Pacific Northwest will allow severe weather opportunities in the Southern Plains, limited only to Texas and New Mexico into Colorado at this time. Northern Plains may become involved for a short period with low expectations in a couple of days. Long range outlook becomes quiet as zonal flow takes over before the risk of severe weather goes on the upswing as we enter prolonged ridging over the Plains.

Heat Outlook: High Activity
Two periods of prolonged high pressure formation in the Plains and portions of Midwest will lead to increased flows of heat north into mainly the Plains area. Eventual zonal flow and long range Death Ridge formation potential may allow this heat to openly enter much of the nation. Long range outlook remains unusually toasty in this scenario.

Tropical Outlook: Low Activity
Lack of enhanced tropical convection over the Atlantic basin will not permit any sustained tropical cyclone formation. Current area of interest (Invest 93) is moving on land, and next chance at development appears to be over 10 days away.

Andrew
By Andrew at 7:33 PM 4 comments: Links to this post 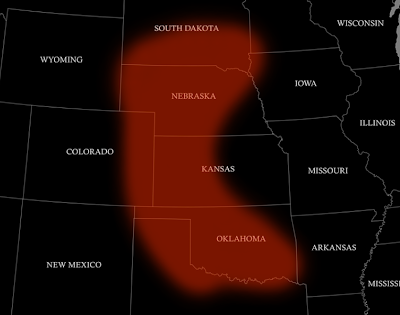 A Special Weather Notice has been issued by The Weather Centre for the following areas:

Expected threats to those in the mentioned states are:

Andrew
By Andrew at 3:12 PM No comments: Links to this post 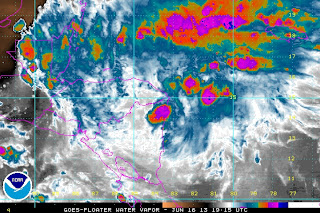 Invest 93 has formed in the southern Gulf of Mexico at this time. Satellite imagery indicates convection associated with this invest is robust, with intense convection on every front of this invest.

Forecast information indicates this invest will move on land in Mexico and will not pose a tropical development threat to the United States.

This will be the final statement for this invest.
By Andrew at 3:06 PM No comments: Links to this post 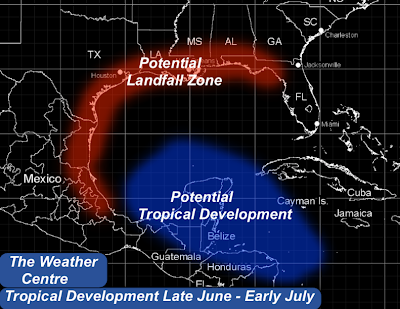 I believe tropical development is now likely in the western Caribbean into the Gulf of Mexico in late June and early July. If development is to occur, the potential landfall zone would extend from the Florida Panhandle into Mexico. Houston, TX and New Orleans, LA would be affected.

As we move into the last week of June and early July, a massive high pressure system should overtake much of the United States in a formation referred to as the 'Death Ridge'. The term means how the high pressure system overtakes quite literally the entire nation and should extend into Canada. Unfortunately, this high pressure system brings up some intense heat from Mexico and the Southern Plains that can catch some people off-guard in northern parts of the nation and can lead to heat exhaustion and heat stroke.

The massive Death Ridge can lead to enhanced chances of tropical cyclone formation in the Caribbean and Gulf of Mexico. With tropical convection moving into a favorable area of the Gulf of Mexico (called the Madden-Julian Oscillation) in this timeframe, I find it likely that, should development occur, strengthening into a tropical storm and possibly a hurricane would occur and find its way into the red shaded areas of the Gulf Coast.

Andrew
By Andrew at 11:27 AM No comments: Links to this post