There has been a movement towards a potential winter storm between the 10th and the 12th, and signs are looking good for the Plains and Midwest. Let's get going over the models. 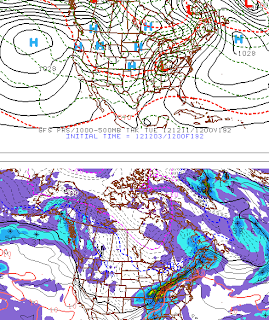 This is the GFS model forecast for the morning of December 11th. As you can see, there will be a good low pressure system in southern Illinois/southern Indiana, with cold air wrapping around behind it. That dashed red line nearest the low pressure system is the rain-snow line. Ignore any other dashed red lines. If we look at the bottom image, we see precipitation forecasts. Any precipitation north of the black line is theoretically snow, and precip to the south is rain. This could end up being a severe weather event as well, depending on the temperature gradient between the warm air and cold air in front and behind the system, respectively. 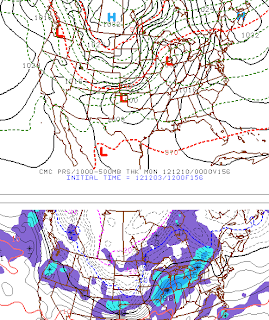 This is the Canadian CMC model forecast, with the low pressure system now on the Illinois/Wisconsin border. The same rules apply with the black line on the bottom image, and the red dashed rain/snow line on the top image is still closest to the low pressure system in question. The CMC extends the warm sector further north than the GFS, and the track overall is further north. While I do think the extended warm sector is possible, the CMC has been known to forecast ridiculously in the long range, so this could be one of those instances where it's kind of there, but not really (with the track). 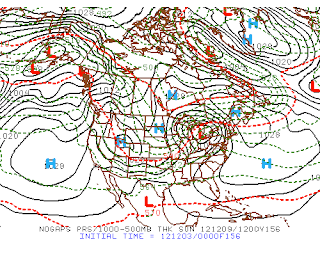 The ECMWF falls into a semi-GFS forecast, with a more eastern track. The warm sector is extended, but not as much as the CMC. The system is also stronger than the CMC model, enhancing my idea that the CMC isn't making its best forecast for this system at this point in time. 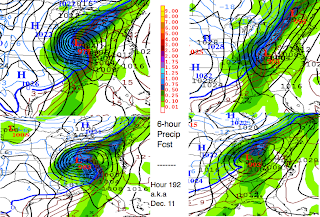 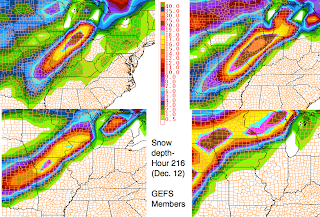 Here's where things get interesting! These are different forecasts from today's 12z GFS Ensemble members, with the top four images being of the 6 hour precipitation and sea level pressure forecasts. The blue line is the rain-snow line. The bottom four lines are snow depth forecasts, and legends for both sets of images are in the middle. The GFS Ensembles shown here are pretty darn aggressive with this system, with one member obliterating central Illinois with over 2 feet of snow! Alas, I do not expect these forecasts to pan out in the slightest. While they should be watched, as some Gulf of Alaska energy should be involved here, do not get your hopes up for 25+ inches of snow.

The models are pretty scattered here, but I think the GFS/ECMWF models have a pretty good idea on this system. The Plains should get snow, and the battleground rain/snow line should stay in the Midwestern regions. Waiting another 48 hours will give us a slightly better idea for this system, and another 72 hours should bring much better clarity.

A serious introduction to winter looks to kick off a new pattern for the 2nd half of December, as I have previously stated. But the question is, will it stay?

This pattern, which I like to refer to as the 'Four Corners' pattern, is showing up in the next 9-10 days on the GEFS control forecast. Before we get into it, let me break down what the Four Corners pattern is.

When you're playing Bingo (or even Tic-Tac-Toe, if that's your strategy), an objective may be to get all four corners covered in order to get an advantage in Tic-Tac-Toe, or to win in Bingo. Much like you receive an advantage from this tactic, North America also receives an advantage from this sort of pattern. In this situation, the GEFS Control is forecasting ridges of high pressure (HP) to set up in four areas: off the Canadian Maritimes, northwest Europe, north Asia, and the Gulf of Alaska. In response to this blockade of HP systems, the polar vortex has to go somewhere, and in this case, North America is the only exit for the Polar Vortex (PV). So, as a direct response to this Four Corners blocking system, the PV will begin sending its energy southward; in this scenario, into North America.

Back to the Day 9 GEFS Control forecast, the forecast does include this Four Corners pattern, and in response, the PV must dip its energy south. Now, while it does not appear that this energy is in the Lower 48 at the moment. However, if you look into northwest Canada, you will see at least one circle of low pressure (LP) in the region. The Gulf of Alaska ridge will force this LP system south into the States. 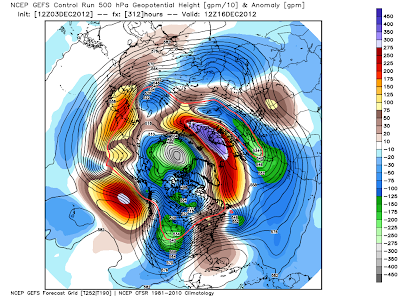 Advancing to December 16th, we find that, as expected, the Four Corners pattern (and a newly-developed negative NAO) has incited a deep low pressure area to penetrate into the Rockies. The main polar vortex area is still located in the North Pole, so temperatures may not be as cold as earlier forecasted. However, this is still a strong low pressure system, so let's keep watching. Notice how the Four Corners pattern has now turned into a three-fold system, with the Canadian Maritimes and North Europe HP systems combining and extending into Greenland.

Let's make the connection between the negative NAO and this strong LP system in the Rockies. This system looks like it will be pushing east- that much is apparent. A negative NAO should try to keep the system south, but notice the HP area in the Southeast. This could pose problems for such a solution, but I will discuss this storm more in depth later on in another post. 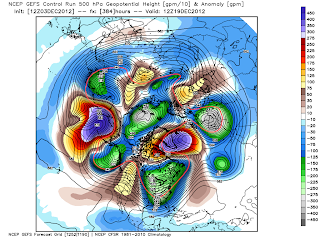 Advancing to the end of the GEFS Control forecast, we see that a very strong negative NAO is now holding itself up, and our storm system has now strengthened and shot east, possibly as three separate systems. Here is where we encounter some signs I want to watch for the rest of the month- a strong Bering Sea HP, a deep Gulf of Alaska LP, and a ridge in the West. Now, the first two things should make you cringe- they were the items that caused the warm weather recently. However, if we have the GOA trough confined to its own region, a ridge can form in the West, and suddenly we have a good positive PNA going on. The negative NAO presence tells me that it should be there to stay, but this strong trio of low pressure systems in the East US could knock that -NAO right out of place. I would like to wait awhile before I make any conclusions on that, however.

In summary:
-A strong storm system may introduce the new weather pattern.
-There is potential for a positive PNA / negative NAO pattern to set up.
-Watch the Bering Sea / Gulf of Alaska to see if the +PNA can set up.
-This would be December's best chance for a better pattern.