Cold, Stormy Signal Over North US In Long Range

The GFS and ECMWF long range 500mb height anomaly forecasts are in, and both are showing a cold and stormy signal over the East US.

First, let's acknowledge what's going on over Greenland. See all that red? The more orange and red there is, the more indication there is that this is a ridge of high pressure, like the high pressure systems that bring sun after a cold front. This particular high pressure system is involved in a pattern called the North Atlantic Oscillation, or NAO. In a positive NAO, there is a strong low pressure system sitting over Greenland, not really moving. This, in turn creates a warm and dry situation over eastern portions of the US. In the negative NAO phase, one can find a ridge over Greenland. This ridge forces a cold and stormy pattern to set up over the East US. In the winter, this negative NAO can pave the way for big snowfalls, especially in the Northeast.

Both the ECMWF and GFS appear pretty confident on this negative NAO signal emerging over the next 8-10 days. This means that the eastern US should become much more stormy and cool in response. Notice the blues over the Northeast on both images. This means a stormy pattern, and is seen in response to the negative NAO expected.

In summary, if you live in the East US, get those heavy jackets at the ready, because the consensus at the moment is for a much wetter and cooler pattern to start up in about a week or so.

Several models have caught on to the idea of a very strong disturbance dipping into the nation in the next 5-8 days, but the location of each model differs. Let's take a look at what could happen in the medium range.

The GFS model is indicating a strong disturbance is to enter the nation and dip far into the Southeast, pulling down cold air and a general chill to the tropical region. Despite the strength of this system, the GFS puts relative humidity levels and precipitation values very low on land, while sending quite a bout of rain (and possible sleet) to the north and east. Despite the typical Nor'easter feel, the freezing line will not be far south enough to provide a good snow opportunity.

The NOGAPS model keeps the consensus going, with a strong system in the East and precipitation to the north and east of the center of the low. However, the NOGAPS is further north with this system and precipitation than the GFS. Relative humidity values within what appears to be this closed low are very high in comparison to the GFS. However, remember that the NOGAPS is not the most reliable, so take this solution at your own risk.

Now comes the ECMWF, known for being the best medium-range model currently in the weather world. The ECMWF has this system becoming a closed low like the NOGAPS. Relative humidity levels in the upper and lower levels of the atmosphere also supersede those of the GFS. What is more interesting is that the ECMWF has a pool of below-freezing air present in the western Great Lakes. This cold pool could easily force some wet snow to develop, possibly creating a wet blizzard as winds will be howling should this verify.

The medium range is definitely looking active. Who gets the precipitation and where this system ends up will be crucial not only to the short range, but to long range patterns like the LRC.

Andrew
By Andrew at 4:15 PM No comments:

Water vapor imagery indicates the disturbance of interest is in the southern Rockies, where elevated water vapor values are present. Thunderstorms look to be attempting to fire in portions of New Mexico and Arizona, indicating that the threat for thunderstorms in the Plains and Midwest tomorrow remains.

It should be noted that severe weather was observed upon the system's landfall last night in south California. A rule of thumb is that the stronger weather the system brings once it is onshore, the worse weather can be expected in areas that will eventually be affected. Applying that rule to our current situation means that the Plains and Midwest will be in for a bumpy Saturday evening into the overnight hours.

Model guidance fairly messy at this hour with the system. Because of limitations of the ECMWF, I will go to my own devices with the NAM and GFS. GFS prefers a more organized squall, while NAM essentially drenches the lower Great Lakes in a few mesoscale squalls over the course of 24-36 hours beginning Saturday afternoon. Upon trying to find the root cause of such model hysterics, initialization proves little- both the GFS and NAM had the system at the same spot as of 12z initialization. Initial strength did differ, but that is not of significance to me.

Bringing the WRF-ARW model into the picture for assistance to model troubles reveals a solution in between both models. The 12z WRF takes a fairly strong squall line through the Midwest and Plains, yet persists with precipitation through the Lower Great Lakes much like the NAM. In this case, the WRF seems like a good compromising point for the NAM/GFS.

Attention turns to severe threat and just what we are looking at. I believe the main threat will definitely revolve around tornadoes and damaging winds, as an enhanced jet stream and lower level winds have potential to mix down to the surface. In the midst of lacking instability (an idea thrown out by the latest NAM model), strong surface winds and enhanced shearing will get any developing cells on their feet with an initial tornado threat before the storms become more linear, favoring a squall line position.

Not concerned about timing issues within the models- storms should initiate during the day in the Plains and western Midwest before entering the interior Midwest and Lower Great Lakes overnight, likely reaching east Michigan towards daybreak. 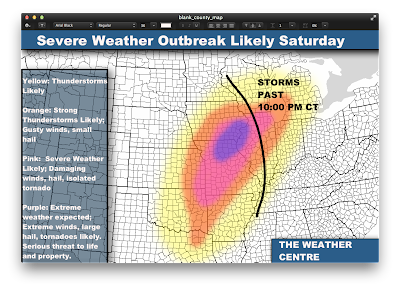 This event looks to be the last significant one of the season, unless long range ensembles turn out to be correct in a few unusually strong systems coming through.

Andrew
By Andrew at 3:55 PM No comments: