I believe we are likely to see tropical development in the Caribbean and/or Gulf of Mexico in the first 7 days of July. This comes as the atmosphere primes itself for a very tropically-conducive upper air pattern in these same regions. 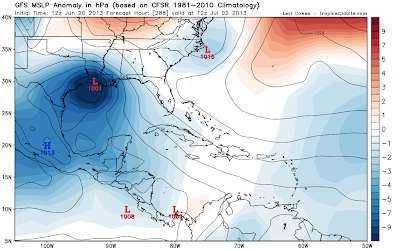 The latest GFS model had a substantial tropical cyclone present in the Gulf of Mexico on July 1st, with landfall occurring in western Louisiana the morning of July 2nd. Pressure readings would drop below 1000 millibars in the open waters before rising as landfall occurs, as shown in the image above.

I'm really pushing for the likelihood of development in the Gulf of Mexico and/or Caribbean because the atmosphere is going to be truly primed for tropical cyclone formation to start the month of July. Global models are now agreeing on the development of a very strong Madden-Julian Oscillation event in the Eastern Pacific into the western Atlantic. This includes the Gulf of Mexico and Caribbean. This strong MJO event means enhanced chances for tropical convection in these areas. If the tropical convection from this MJO event combines with the favorable mid-level atmospheric flow being sustained by the large high pressure system over the United States (which is likely to occur), tropical development would be expected.

At this point in time, I would anticipate development to occur either in the Western Caribbean or in the Gulf of Mexico; I don't find it too likely that we would see a cyclone make its way through the entire Caribbean and Gulf of Mexico when the most conducive conditions are closer to the US Mainland. Corpus Christi TX, Houston TX, New Orleans LA, Mobile AL and Pensacola FL could all be affected by a tropical cyclone forming in the Gulf of Mexico.