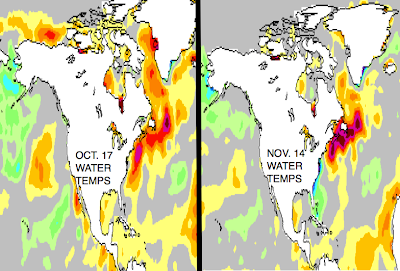 The positive Atlantic Multidecadal Oscillation (AMO) appears to be losing its grip on the waters near Greenland in the past month.

Above shows a side-by-side comparison of water temperatures on October 17th and November 14th. If we look on the left side (October 17), we see a wide swath of above normal water temperatures stretching from Greenland, through northern Canada and to the waters south of Greenland. The waters off the East Coast also showed heavy warming during that time period. If we look to the right image, taken on November 14th, we now see neutral water temperatures in place around much of Greenland and in Northern Canada. However, waters remain warm to the east of eastern Canada, and have actually intensified off the coast of the Northeast US.

Andrew
By Andrew at 3:07 PM 5 comments: Links to this post

This is my first call on the November 27-29 potential winter storm system. Let's start with the factors that are going into my first call.

This is the latest ECMWF model. This is valid for the morning of November 26th. It shows our storm system currently in southwestern Oklahoma, with a minimum pressure of 1006 millibars- a pretty weak system overall. Notice the cold air far up in the North Plains. If that were to be pulled south by this storm system, many locations could see absolutely frigid temperatures.

2 days later, on the morning of November 28th, the storm system has moved due east and is now out to sea, hugging the East Coast. Considering we will be in a negative NAO, this is not surprising, but the due east movement of the storm is pretty sketchy, especially considering the ECMWF has been supporting a North Camp (system affects Midwest, Great Lakes) solution for so long.

By the way, so you know, the North Camp was described above. The South Camp is for models that take the system through the South US and up the East Coast. They are called 'camps', because the models will group together for some time (like a camp of people) under one forecast solution (like a group of people with a common cause).

Here's the run-down of the models for camps. 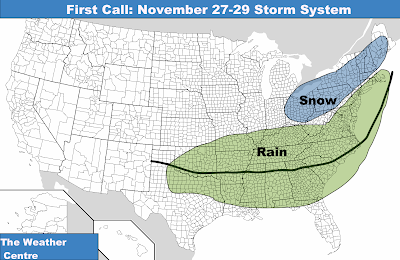 Based on how the models are treating the system heading out of the Rockies, and the 4 day lag between observed NAO conditions and effects on North America, the system should be forced south, providing a rainy scenario for the region. However, when the storm shoots north and strengthens a bit near New England, this precipitation will turn to snow. Best accumulation will occur nearest the Great Lakes as cold air behind the system brings about lake effect snow potential.

Andrew
By Andrew at 3:05 PM 2 comments: Links to this post