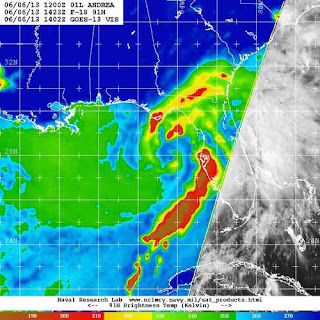 Satellite imagery for Tropical Storm Andrea shows that the system has indeed strengthened overnight, with her western flank now starting to build back in the immediate vicinity around the eye. Aircraft reconnaissance last night showed very strong winds in the southeast quadrant of this tropical storm, where winds maxed out at or just above 60 knots. That little eye-like feature we see would be another sign of strengthening if the system wasn't right up against Florida. 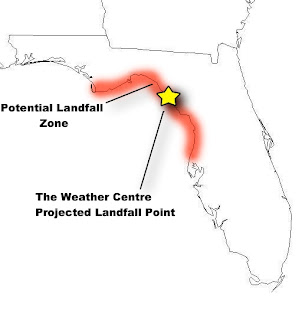 My potential landfall zone now extends further north, from Apalchicola to roughly New Port Richey, FL. My expected point for landfall is nearly due west of Gainesville, but that could change in coming hours. Landfall is expected in the afternoon, with tropical storm force winds already starting to scrape west-central Florida. With a tornado watch in effect, it can be expected that an all-day tornado threat will continue to evolve today. We have already seen a few reports of tornadoes, but nothing in an outbreak context is expected.

Andrew
By Andrew at 11:12 AM No comments: Links to this post