Next Winter Could Be Unusually Frigid

New and bold data has been uncovered, suggesting that the winter of 2013-2014 may be unusually frigid ('frigid' being defined as temperatures ending up below normal for the winter timeframe). 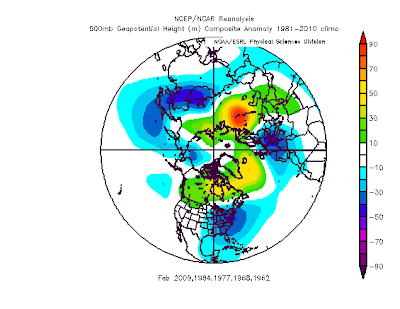 The data I uncovered was the result of digging through records of the Arctic Oscillation. I put together the proposition of using early spring Arctic Oscillation values to predict the next winter's temperatures and atmospheric flow throughout the Northern Hemisphere. For this case, I used years where Arctic Oscillation values in February were negative, but the year after that, the AO values were even deeper into negative territory. For example, if February 1978 had an Arctic Oscillation value of -0.75, and February 1979 had a value of -2.08, I would use February 1978 to compare to the current year and see if the patterns match up. If the patterns do match up, it would be plausible to expect a negative Arctic Oscillation in the forthcoming winter, thus a higher potential for cold. The image above shows 500 millibar height anomalies for five different years- February 2009, 1984, 1977, 1968 and 1962. You may immediately notice years like 2009 for its Northeast impacts, as well as 1984, the year before the epic polar vortex collapse. All of these years have had a negative Arctic Oscillation value in February of that year, to be followed one year later by an even more negative AO value. A quick glance over the image reveals low pressure in the East US, general high pressure across Canada and towards Greenland, as well as to the north of Europe. Low pressure tendencies are found in Western Europe, the Bering Sea and East Asia. I'm going to show observed height anomalies for this past February next; bear in mind the placement of the high and low pressure tendencies in the image above when looking at February 2013 below. 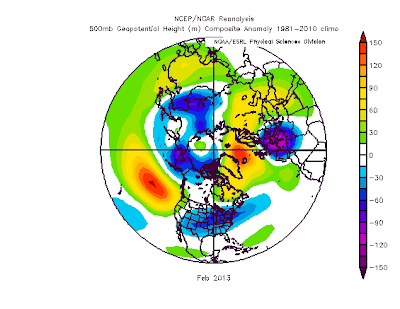 Let's run over the checklist of high and low pressure tendencies we looked at above and compare them to what February 2013 held in store. We see low pressure in the East US, as well as high pressure anomalies in Canada and into Greenland. We also observe deep low pressure in western Europe, in addition to East Asia and the Bering Sea. High pressure prevails to the north of Eurasia. Taking a look at the images together should set off multiple alarms- all the items I listed in the last couple of sentences appeared not only in February 2013, but also in the averaged-out 5 years image at the top of this post. Now, there are a few differences, like extreme high pressure in the northeast Pacific in 2013, as well as more extended low pressure in the multiple year image that we don't see in 2013. However, you get the general idea- there are several similarities between these images. 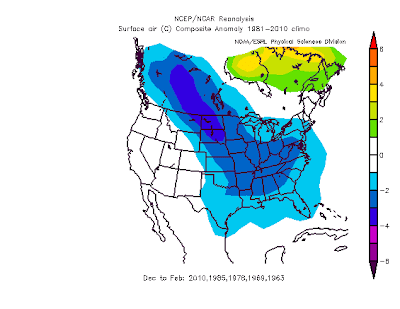 The image above shows average surface temperature anomalies for the aforementioned winters. We see a wide swath of below normal temperatures stretching from the northern Plains into the Midwest and engulfing the Central and East US regions. This widespread cold shouldn't be surprising- January 1985 was the month where the polar vortex truly collapsed, while the winter of 2009-2010 was the snowiest of record for many. All in all, the analog years spell a chilly winter ahead.

I understand if you don't really get how I chose the analog years, my explanation at the top may not have been as sufficient as I would have liked. If you have any questions, comment them below and I'll try to answer them as soon as possible.

Andrew
By Andrew at 4:47 PM 6 comments: Links to this post