Pre-note: There is a disclaimer at the bottom.

This winter hasn't been anywhere near what winter is typically known for- snow and cold. But all that is about to change. We have been proclaiming a pattern change to occur. And after all this warmth, it may be a shock to the atmosphere. So, with all this change, we began to think 'would a snowstorm happen in-sync with the big changes?'.
What we are thinking is that the atmosphere has been very constant with its weather recently, equivalent to a water glass full of water. Since the weather has been constant, the water is still. But when the cold air and snow comes down, the water will become disturbed as if a rock was dropped in the glass. We think that, in the moments of turbulence in the water following the rock's dropping into the glass, that could equate to a very stormy period at the beginning of the cold and snow. Eventually, the water settles down as it adapts to the rock now in the water. This settling is the settling into winter.

Here's the things that we have found to build evidence behind our theory.

1. Arctic Oscillation
At this point, the AO is near the breaking point. The AO itself is the polar vortex that so far has held the cold air. With ridges now bombarding the vortex, it is only a matter of time before the vortex collapses and we see the cold stream south. Today's 12z GFS actually showed the AO going off the charts negative, which would definitely shock people and the atmosphere equally.

2. The North Atlantic Oscillation
The NAO is a very close relative of the AO. We have been seeing very consistent signs of the models trending negative with the NAO. That would bring in a blocking pattern, which would include cold and snow for the Northeast and Great Lakes. It can be inferred on some, not all, occasions that the AO and NAO will go negative at very similar times due to their relations. This would help strengthen the idea of an oncoming negative NAO as we see the AO try to go negative.

3. The Stratosphere
We recently saw a Significant Stratospheric Warming in the stratosphere. This was not the main SSW that we usually see kick winter into high gear. This means we are waiting for another warming event, that we may be seeing soon. Models are projecting intense warming right over the North Pole which would indeed to a number on the polar vortex as well as the stratosphere.

4. Instinct
This might seem like a lousy piece of evidence, and I wouldn't be surprised if you think that. But to me, it seems logical that so many pieces coming together to put winter together would also incite a big storm of sorts during a time of turbulence in the atmosphere as it changes into a winter pattern.

5. Northern Stream Opening Up
Something we have seen recently is the big snowstorms coming from the Southwest (there were snowstorms in Texas, New Mexico if you recall). However, the HPC has recently brought to light that they are anticipating the northern stream to start to open up. If this were to happen, we would be seeing Panhandle Hooker storms start to rev up under ideal conditions.

Here's what we are expecting. 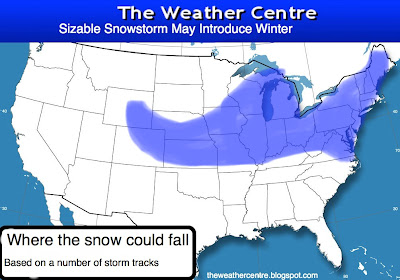 Here's my forecast.
If a big storm were to hit, I could see two solutions.
1. The Great Lakes receives widespread 6 inches snow, with isolated 1 foot totals. Bitter cold follows, with lake effect snow totals adding on at least 6 inches.
2. A coastal storm develops and hammers the Northeast with widespread 1 foot+ totals.
This is as uncertain as it gets. There is a very real possibility that this does not happen, so do not hold me to it. I am just throwing this out there based on my thinking. Again, I would not be surprised if it does not happen. Everything I mentioned above is nowhere near certain, so don't get too excited. I cannot stress enough how uncertain this is.
By Andrew at 4:00 PM 24 comments:

Big Storm Prediction Coming Out at 4:00

A big winter storm prediction will be coming out at 4:00 PM CST today.
It will involve an explanation as well as the areas affected. Stay tuned.
By Andrew at 9:18 AM 11 comments: