Cold Pattern Evolving in Near Future May Repeat this Winter

A cold pattern that will be showing up in the near future could have a prolonged impact for this winter.

The image above shows 500 millibar height anomalies for October 19th, with the European ensemble projection on the left and the American ensemble projection on the right. Both ensemble sets are in agreement that a ridge of high pressure will develop over western Canada in cooperation with a developing trough over the waters in and around the Aleutian Islands. In response to the ridging in western North America, which we call a positive PNA (Pacific-North American index), a cold pattern will set up over the US, particularly for the Great Lakes, Midwest, Ohio Valley, and Northeast.

Both ensemble sets have the western North America ridge connecting with a weaker high pressure pattern over Greenland, which is described as a negative North Atlantic Oscillation (NAO). The negative NAO and positive PNA patterns are two major atmospheric patterns that help usher in cold air into the United States. While the ensemble systems have slight variations over the general Northern Hemisphere pattern, the concept that a colder weather regime will evolve over the Central and Eastern US is agreed upon by both ensemble systems. The temperature anomaly graphic below, which shows the American ensemble's temperature anomaly forecast for one day per panel, agrees with this colder regime: 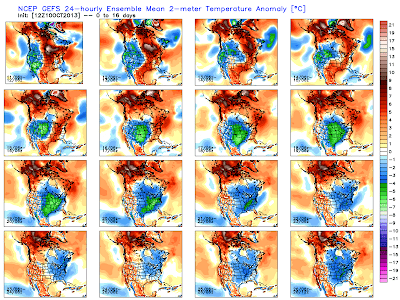 But we aren't finished yet. The American ensemble insists that this cold weather pattern sticks around ... for quite a while. 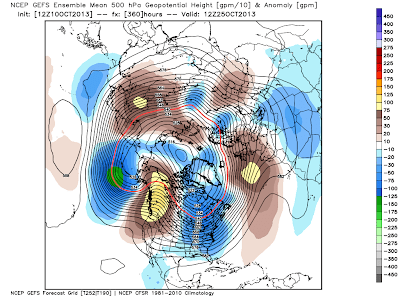 This is the American ensemble 500 millibar height anomaly for October 25th. Does the pattern look familiar? It should, because it is nearly identical to the pattern being shown by both global ensemble sets at the top of the post for October 19th. A natural caveat for the long range forecast models is their notorious lack of accuracy. Taking that into account, it's possible we don't see this cold pattern stick around this long. At the same time, we have to examine all the possibilities, and one of them is that this pattern becomes more prolonged in nature. Looking at the temperature anomaly graph just above this 500mb anomaly chart, the ensembles are willing to maintain a cold air mass over the Central and Eastern US in the bottom row of panels. It is this bottom row of panels where the forecast period ends, and we cannot see projected conditions beyond October 26th (the far bottom right panel). The last 11 - that's right, ELEVEN - American ensemble runs consistently agree on this cold air mass being maintained in much of the country. Will it actually happen? It's too far out to tell, but model consistency does help the point of this colder pattern possibly becoming more prolonged in nature.

But the fun is not over yet. It is possible we could see this cold pattern return a few times throughout the winter through the Lezak Recurring Cycle.

The Lezak Recurring Cycle, or LRC, is a tool developed by meteorologist Gary Lezak that, in essence, can enable forecasters to predict the overall weather pattern months in advance. The gist of the LRC involves a cycling weather pattern that develops in October and November of each year; no pattern is the same from year to year. Around mid November, the LRC begins to repeat, meaning we start to see a similar weather pattern in mid November that we saw in early October. This means that the cycling pattern has begun, and it will continue to cycle on a 40-60 day interval for the next ~10 months before it dissipates over the following summer. Now that we are in October, it is time to start looking for atmospheric phenomena that may factor into the LRC this year. We already saw the big winter storm in the Plains, and time will tell if that becomes a part of this winter's LRC, and now we are looking at this possibly-prolonged cold weather pattern to see if it will factor into the LRC. Considering it should occur in mid to late October, chances would be good that we see this in this year's LRC. However, in meteorology, nothing is ever 100% guaranteed. Again, time will tell, but it's possible this cold fall pattern returns in November and January as a long(ish)-term frigid weather pattern.