I'm outside checking out the situation for severe weather. Snapping pictures, waiting for the storms to roll in.
From what I've seen, many cumulus clouds are now actually able to build, hence the storms.

Eastern Wisconsin, North Illinois and the northern section of Michigan are within the realm of severe weather potential for today, as a cold front is expected to sweep through the area and provoke strong to potentially severe thunderstorms. Hail and damaging winds will be the main threats.

The Rapid Refresh (RAP) model is showing several clusters of showers and storms in Illinois, Missouri around the 5:00 hour (PM, CDT) tonight. Looking over instability values, these showers and storms should be supported fairly by 1000-2000 j/kg of CAPE. It should be noted that the HRRR, which is the High Resolution Rapid Refresh, has been increasing shower and thunderstorm coverage in the timeframe mentioned above. You can find more updates on our Facebook page at www.facebook.com/TheWeatherCentre

Alberto to Shift Out to Sea in Coming Days 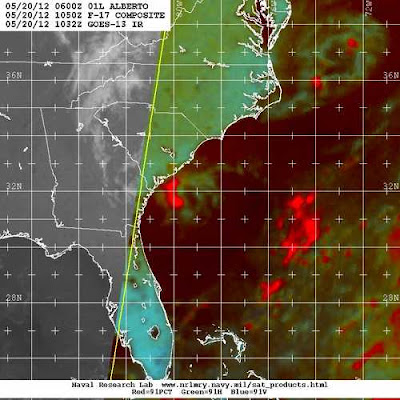 Alberto remains at tropical storm status, however does appear to be fairly weak, with this imagery detecting the strongest part of the storm on the western side, leaving the eastern side fairly exposed to the elements of nature. However, Alberto does look to keep tropical storm strength as it makes a 180 and heads northeast along the East Coast.

These are called dynamic models, which are models that take the information from buoys and surface data near the storm, unlike statistical models, which rely on historical tracks. The dynamic models are projecting a close brush with North Carolina which would likely result in minor beach erosion and weak storm surge from intense waves. After that, the system looks to either go out to sea, or actually pose a threat to New England. That will definitely have to be monitored in coming days.