The North Atlantic Oscillation (NAO) has two phases: Positive and Negative. It is known that in the winter, when the NAO is negative, the East US is at a favorable position for receiving snow and cold. But, a lesser-known fact is that the NAO has two 'sub-categories', if you will. The location of the NAO is key. 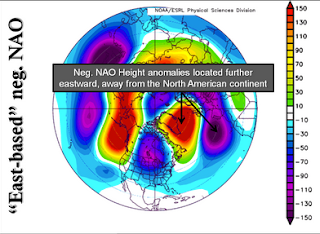 This image shows a typical negative NAO in the 'East-based' phase. When it says east-based, what it means is that the strongest part of the high pressure system is to the east of Greenland, hence east-based. In an east-based NAO, the Midwest and Ohio Valley, the jet stream shifts to focus the cold air in the Plains and Midwest, with the storm track giving the Midwest, Ohio Valley and similar areas the best storms. 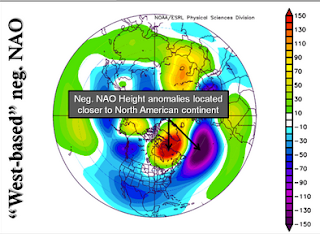 The counterpart of the east based NAO is the 'West Based' NAO. As you may imagine, west based means that the strongest part of the high pressure system is now to the west of Greenland, as annotated for above. In the west based negative NAO, one finds the cold and snow now focused in not only over the Plains and Midwest, but now over practically all of the East US. The storm track is now favoring the East Coast, and keeping areas to the west drier.

Images from http://www.nc-climate.ncsu.edu/climate/patterns/NAO.html
By Andrew at 5:42 PM 3 comments:


An analysis of the lower level winds around the world indicate that there are some areas that are showing characteristics similar to that of a La Nina. I marked off 5 areas in the image below, which shows the latest weekly 850mb wind anomalies across the world.

AREA 1: There is a band of above normal wind anomalies stretching from northwest South America to waters a few hundred miles off of southern Mexico. Looking at typical wind anomalies for each ENSO phase, this wind band is in a position that would typically unveil El Nino-like wind anomalies, but these winds are above normal, whereas the El Nino would find below normal winds in this area. What this means is that the atmosphere favors a La Nina set-up in that particular area. Because those winds extend into Nino 1+2, the region of ENSO monitoring farthest to the east, this could impact what the ENSO will eventually do this winter.

AREA 2: There is a wide swath of below normal wind anomalies off the southeast coast of South America. A comparison to typical El Nino wind anomalies in that area shows that what is being observed is opposite of what an El Nino would show. It appears that it is safe to say that the South American continent is supportive of a La Nina.

AREA 4: The waters in the Indian Ocean into parts of Oceania are showing an anomaly of winds, so we turn to the comparison charts. This situation actually shows both a La Nina and El Nino side, as there is a below normal spot of winds just south of India (El Nino symptom). However, waters to the east contain abnormally active winds, a sign of a La Nina. So we can call this one a draw for the moment.

AREA 5: There is an area of below normal wind anomalies present offshore the Northwest coast of the United States. If we do a quick check on the typical Nina/Nina charts, we see that this anomaly actually resembles an El Nino. However, don't get too excited just yet: The winds just to the north of this below-normal swath resemble that of a La Nina.

It's a very tricky situation, and this is just a drop in the bucket to help determine what the atmosphere wants to do.

The latest image of sea surface temperature anomalies in the Pacific indicates a few 'waves' of colder than normal waters oscillating (moving) through the ENSO regions. This is not a regular movement of water, as the arc-like shape of the cold waters, and their tendency to move in the same direction at the same latitude is concerning.

It is known that recently, the El Nino suddenly dropped off the radar. It is only now that we are beginning to see defined cold waves oscillate across the ENSO region. I find this event to be related to the ENSO teleconnection, as these bodies of water are shaped in arc formations- unusual in the rest of the world. Additionally, there are more than 4 of these waves that are all moving on the same latitude. Also, notice how these 'waves' are the same distance apart from one another. This feature is not evident in waves towards the 180 degree longitude line, but is shown to the east.

What does this mean for the ENSO? Until these 'waves' dissipate (if they ever do), the El nino will most likely not be able to get itself back on it feet. I can easily see this El Nino gone for the winter season. I will watch for it to reappear, but for now, things are not looking that good.