Winter Not Over Yet 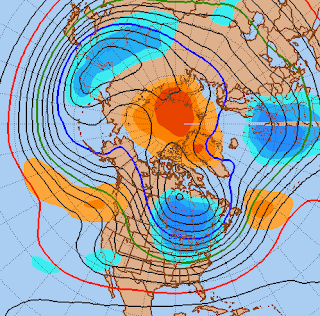 I do not believe that winter is over just yet, although we begin to approach the final weeks of the winter season.

Pictured above is the GFS Ensemble 500 millibar forecast for the very end of the forecast period, February 20th. High pressure has built in over the North Pole, and strong low pressure is present over south central Canada, extending into the Great Lakes. This is all in response to the sudden stratospheric warming we saw earlier on last month. The warming is now dying off, but its effects will continue for at least another week or two. During this time, previous warming will continue to propagate down to the surface, leading to increased chances for cold weather. One thing I am fairly certain of is the high latitude blocking finally making it into the North Pole. This blocking high pressure is already in northern Asia in the medium range, so only a slight shove north would result in the high pressure system reaching the North Pole. This could also be another effect of the previous sudden stratospheric warmings, or SSW's. SSW's are known to provoke blocking high pressure in the higher latitudes, so such a solution is certainly plausible. I do have some concerns about that small low pressure area in the Southwest US and high pressure area in the Pacific Northwest. That is a common set-up for a Rex Block pattern, which can induce warm and dry conditions over the East US- something snow lovers are certainly fearing. 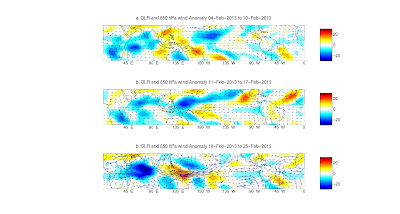 Now, you may have seen some Madden-Julian Oscillation (MJO) forecasts that were moving into Phases 1-3 during this timeframe, which decreases cold and snow chances with each increasing phase. However, it looks like those models may be on the wrong track. As several global models have also been hinting at, this forecast shown above depicts Outgoing Longwave Radiation (OLR) anomalies for the next few weeks. The images are centered over the Equatorial Pacific, where the MJO occurs. For those unfamiliar with the concept, the MJO changes phases by tropical convection moving from one part of the Equatorial Pacific to another. Cold and snow is most favored when this enhanced convection (negative OLR) is shown in the Atlantic or the Indian Ocean. The above forecast from the Roundy Waves Albany indicates that very powerful negative OLR anomalies may evolve going into the last week of February. It is plausible that the last week of February may then be very active. I would like to wait a little longer until we get closer to this timeframe, but right now, it appears that a cycling MJO in phases 8-2 may occur throughout February. Those three phases are notorious for bringing cold and snow to parts of the US in the cold season. 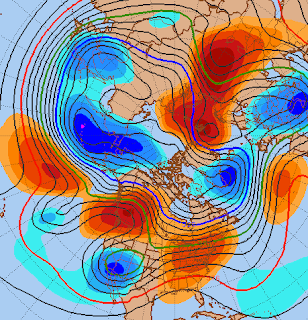 It looks like the atmosphere is preparing itself for a winter storm that would hit around Valentine's Day.

Above is the GFS Ensemble 500 millibar height anomaly forecast for February 10th. We can see low pressure in the Southwest US, as well as high pressure stacked on top of it in the Pacific Northwest and Southwest Canadian regions. This stacking formation is an atmospheric blocking pattern called the Rex Block. When the Rex Block sets up, you have two centers of low pressure and high pressure that are essentially not moving unless the other does. As a result of Rex Blocks that form on the West Coast, one tends to find high pressure and zonally-oriented (plain west-to-east wind flow, no cold shots pushing south) wind flow. This is exhibited well in the forecast image above, where you can see strong high pressure in the East US as a byproduct of not only the solid Rex Block, but also due to the deep trough in the Bering Sea. This trough of low pressure means an index called the West Pacific Oscillation is positive. The positive WPO brings about low pressure in the Bering Sea and high pressure (and warm temperatures) in the East US. 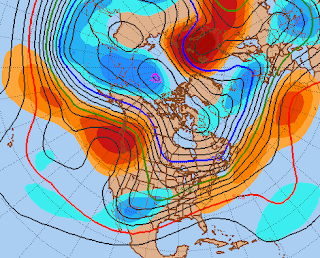 Moving ahead to February 12th, we see that it is the low pressure system in the Southwest that has budged first. As a result, the high pressure system in the Pacific Northwest and Southwest Canada has backed off and begun to shift a tad west back towards the Pacific Ocean and Gulf of Alaska. Due to the concurrent weakening of the trough in the Bering Sea, the positive WPO regime weakens, and the high pressure system in the East US begins to move out to sea and weaken in the process. But back to the storm, that low pressure system that essentially blinked first in the Rex Block has to go somewhere. And the only option is for it to go east into the Plains. This is displayed well in the ensemble forecasts for this depression in 500 millibar heights to shift towards New Mexico and Texas. If we look at the rest of the Northern Hemisphere, we can get a feel for the factors that will play into the eventual track for this system. For one, low pressure is centered over southern Greenland, so this storm is unlikely to go up the coast....for now. Low pressure in the Bering Sea and high pressure in the East pretty much rules out a coastal track or even a track that brings the best snow to the Ohio Valley and central Great Lakes. It is very possible that the track would be up through the central and Northern Plains, a track that has fooled the Central and East US out of far too many storm systems this winter.

This is certainly bound to change, and I will update when it does. This is a look at what could happen come Valentine's Day.