The latest 18z GFS model is projecting over 18 inches of snow to hit northern Minnesota in the next 120 hours, bringing a potentially significant snowstorm to start the first full month of fall.

It should be noted that the GFS is the strongest model with this system, so this probably will not happen. However, this is quite interesting, as amounts are increasing as we head closer to the event itself.

More on this developing situation tomorrow.

This latest 120-hour snowfall forecast off the 12z GFS from Wxcaster is indicating that the first snowstorm of the season will be upon the Upper Midwest.

The GFS model is indicating that up to 6 inches of snow may fall in extreme northern Minnesota, with as much as a foot or more hitting parts of south central Canada. This first snowfall event is rather early as a whole for the nation, and many may be unprepared. Spread the word if you are in the zone for possible snowfall, especially to those with young children or those who may be elderly or disabled. Just as heat waves can kill, cold can kill those at high risk, such as the young and old.

Andrew
By Andrew at 7:29 PM 3 comments: Links to this post

THE COLD IS COMING!

The cold weather is coming, and coming fast. The latest ECMWF is showing very cold 850mb temperatures across the North Plains, pushing into the nation following a cold front that is entering the central Great Lakes and Ohio Valley at the time of this image. 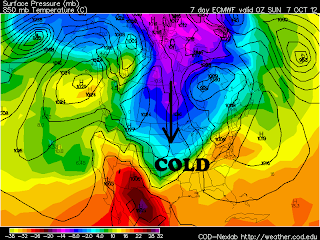 If the ECMWF is to be believed (and it should be), the coldest air of the season is only days away. This would mean that the first two weeks of October should be met with more people wearing jackets and long-sleeved shirts than in the last few weeks.
You may be thinking that the models are probably just overestimating this event, but the scenario has some backing to it. 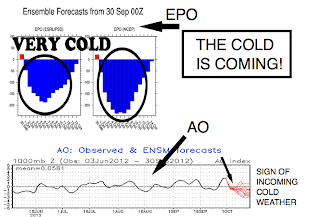 The East Pacific Oscillation (EPO) and Arctic Oscillation (AO) both plummet to the negative phase in the first week of October, setting the stage for a very cold period for the second and third weeks of October. When the EPO is negative, we commonly see a cold period across the east US and warm conditions in the West. With the negative AO, the north and east US get cooler than normal. These two combined will enable colder than normal air to set up across the region.
However, Halloween is looking like it will not be as cold as the next couple of weeks will be, as the EPO looks to rise back to a more positive phase.

Andrew
By Andrew at 2:10 PM 7 comments: Links to this post

This is an update concerning the ongoing severe weather situation in the south-central US.

Above is an analysis chart, depicting current conditions across the region. Looking at the panels, pressure tendencies have been falling in the past few hours, indicating a strengthening of the system. High dewpoints in the area, combined with temperatures hovering immediately around those dewpoints should make for an unusually wet situation, as such a slim margin between the two brings about enhanced concerns for flooding.

On the bottom right is the latest observed wind field. We can see very tight wrapping of the winds spread across the region, with surface winds surpassing 20 MPH in some areas. Offshore, in the immediate vicinity of a particularly strong band that is moving to the north is producing winds above 40 MPH, making for a dangerous situation for workers on the oil rigs.

The lack of available energy for the storms is observed on the bottom left. However, with this lack of instability, the potential for flooding rains lessens, which is good for those already hit hard by Hurricane Isaac in the last several dozen days.