I'm watching out for a potentially significant severe weather outbreak that would occur in the middle of March. Please note that due to the long range nature of this post, it is possible that the event does not happen. What I show below gives you my current thoughts on the situation that are very much subject to potentially drastic change. (The following is copied from the March 12-16 Potential Storm post) Shown above are ECMWF model projected 500mb height anomalies over the North Pacific, valid on March 6th. We want to take a look at Japan in this image, which is on the left-hand side of this graphic. If we look at Japan, we see deep purples over the island nation, indicating the presence of anomalously low heights. This tells us there is a storm system afoot; the purples indicate the storm is of the stronger variety when compared to other systems. How can weather in Japan relate to weather here in the US? If we use the 6-10 day correlation, explained by Joe Renken, which states that a storm system in Japan can affect the United States 6-10 days later, we find that this storm system would be expected to create a storm in the United States during a March 12-16 time period.
There is something I'm watching in this time period and on model forecasts. If you were to animate the maps over the North Pacific, you would find that it almost seems like two separate systems impacting Japan over the March 6th time period, but the proximity to one another makes it seem like one big storm. It might take a little while to determine if this really is one strong system or two moderate systems, but until then, it's better to err on the side of caution and discuss how a single, strong storm system could impact us.

We can actually figure out the projected track for this storm as well, by using a tool titled the Lezak Recurring Cycle. The Lezak Recurring Cycle, or LRC, is a tool developed by meteorologist Gary Lezak that, in essence, can enable forecasters to predict the overall weather pattern months in advance. The gist of the LRC involves a cycling weather pattern that develops in October and November of each year; no pattern is the same from year to year. Around mid November, the LRC begins to repeat, meaning we start to see a similar weather pattern in mid November that we saw in early October. This means that the cycling pattern has begun, and it will continue to cycle on a regular, unchanging 40-60 day interval for the next ~10 months before it dissipates over the following summer. Since this season's cycle has been holding at around 57 days, we can go back from the March 12-17 period and arrive around the  January 16-20 time period. The image above shows observed 500mb height anomalies from the January 16-20 timeframe, where North America is located on the upper right portion of the image. If we look at what the atmosphere was like in that mid-January period, we find a defined northwest flow scenario, with strong ridging over the West Coast leading to deep negative height anomalies across the East Coast. The jet stream below for the same January 16-20 period reflects this northwest flow.

(End copied portion) Take a look at the jet stream pattern above. For this period (January 16-20) and the period prior to this (roughly January 11-15), we saw a phased jet stream over the United States. The phased streams are more pronounced in this image, as we see the subtropical jet stream and Pacific jet feeding into a band of stronger winds located over the Gulf of Mexico. Using the LRC, we can predict that not only will this sort of weather pattern come back, but the jet stream pattern should return as well. Additionally, with the jet stream naturally lifting north as we enter the spring season (though it sure doesn't feel like it), the severe weather risks begin to shift more on-land as the stronger jet streams gather more moisture from the Gulf of Mexico. We're already seeing the Pacific jet stream pretty amped up as of today, which looks to play into this potential mid-March severe weather outbreak.

Based on the LRC and the rather ominous jet stream pattern observed in Mid-January, my concern is raised for a severe weather event in the middle of March, particularly around March 13-17.

Here's where we get into the really concerning stuff. Shown above is a chart of six different types of outgoing long wave radiation (OLR) anomalies. We want to focus on the middle panel of the left-hand side, where it says MJO OLR anomaly on February 16, 2014. On February 16, 2014, we saw negative OLR anomalies just south and east of the subcontinent of India. This location of the -OLR anomalies (which indicate enhanced tropical convection) tells us the Madden-Julian Oscillation was in Phase 2, out of its 8 possible phases. Check out the severe weather event that occurred just four days later, on February 20, 2014. 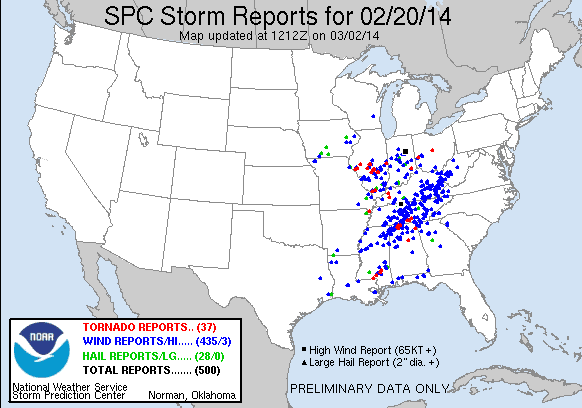 On February 20, 2014, we saw a large-scale severe weather outbreak, as the chart of storm reports from the Storm Prediction Center shows above. The outbreak was primarily a damaging wind event, as you can see by the large swath of blues across Tennessee and Kentucky, just to name a few of the many affected states. However, we also saw a handful of tornado reports. The fact of the matter is, this severe weather event and the MJO entering Phase 2 are not coincidence. They are correlated with one another. See the AMS (American Meteorological Society) article below:

The Madden–Julian oscillation (MJO) has been linked to weather variability in the midlatitudes via its associated overturning circulations and Rossby wave trains that redistribute the thermal and mass fields at higher latitudes. This work examines the relationship between the MJO and violent tornado outbreaks in the United States. A census of events shows that violent tornado outbreaks during March–April–May (MAM) are more than twice as frequent during phase 2 of the Real-time Multivariate MJO (RMM) index as during other phases or when the MJO was deemed inactive.


If you didn't get what this was saying, don't worry. Basically, it tells us that when the MJO is in Phase 2 during March, April and May, or when we see enhanced convection south and southeast of India, we tend to see the chances of a violent tornado outbreak skyrocket in comparison to the nonactive MJO, or the MJO in other phases. While the February 20th event wasn't exactly a tornado outbreak, it was a severe weather event, and this has me concerned for mid-March.

Let's take a look at the forecasted OLR anomalies for March 12, 2014. Once again, we'll look towards the panel labeled MJO OLR Anomaly. If we look at the forecast by Paul Roundy above, we can see very deep negative OLR anomalies placed just south and southeast of India. These blues are far deeper than what we saw on February 16, meaning that this Phase 2 MJO event could be even stronger, and thus the severe weather event would be even stronger as well. Going by the LRC we discussed above, as well as the AMS document analyzed here, I am concerned that we will see a potentially significant severe weather outbreak for the mid-March period. Because there could be a lag period between the MJO Phase 2 event and the severe weather event of about 4 days, like we saw with the February event, I'll make a tentative timeframe of March 13-18 for a potential severe weather outbreak. This one has me worried, and while you should not be worried yet, it's something to watch out for in the future.

Andrew
By Andrew at 4:00 PM 6 comments: Links to this post