Calling out to local forecasters

If you are a forecaster for a major city or region (such as a state), contact us at The Weather Centre to get a link of your blog up on The Weather Centre!
Comment below if you are interested.
Provide the link to your blog.
It will have to be reviewed thoroughly before a decision is made.
Multiple bloggers for one city is accepted.
By Andrew at 7:48 PM No comments: Links to this post 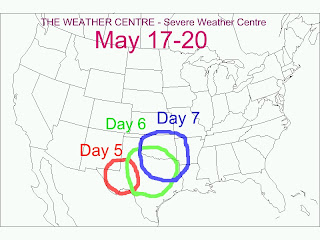 There is some low concern for a severe weather event going into May 17 through the 20th.
This was based off of a low pulling a warm front and following cold front through the South.
As this cold front moves through, there will be a moderate cap in place just before the cold front, suppressing storms. Beyond that thin cap, there is no cap, meaning lower instability than there would be with a cap. CAPE values are forecast to be low as well.
The low level jet and jet stream itself will be weak in the area of interest.
In summary, there is a threat for minor severe weather at this time, but that is bound to change.
By Andrew at 7:29 PM No comments: Links to this post

Mesoscale Discussion issued for:
-Much of Central and South Illinois
-Extreme East Missouri

CAPE values are currently 500-1000 j/kg along a cold front pushing eastwards.
This front should be able to provide some forcing in the atmosphere, probably enough to kick-start at least scattered storms. They are not expected to be severe, but some may be stronger than others.
Vertical shearing is rather weak at this time.
However, some residual low level lapse rates could be a producer of funnel clouds and possibly a weak tornado.
I, personally, would not issue a watch for this scenario. While I do believe a funnel cloud is possible, I am not confident in the potential for tornadoes, and do not feel confident issuing a watch if it was my choice.
By Andrew at 5:00 PM No comments: Links to this post

DISCUSSION
Scattered thunderstorms continue to develop ahead of a cold front in the Southern US. Severe weather threats of hail and locally damaging winds are confined to the Ohio/Tennessee Valley and down into Mississippi/Alabama.
Weaker shear but strong instability out east in the Appalachians will be productive of a less organized but still potential severe threat. However, with weak high pressures likely pushing east ahead of the cold front, I would not be surprised to see even weaker shearing and somewhat higher instabilities.
In Florida, sea breezes will likely spout scattered thunderstorms, some of which could reach severe limits. A widespread outbreak is not expected.

As the storms ahead of the cold front push east, I am expecting a potential for thunderstorm outflow (cool wind from thunderstorms) combined with scattered pockets of sea breezes to initiate some isolated thunderstorms. I would not expect them to be severe, but local damaging wind gusts and small hail are not off the table.
There are currently some storms in New York, but those are expected to weaken.
By Andrew at 4:35 PM No comments: Links to this post

..You can do the following:
-Check our Facebook page (link located on the left sidebar.)

We strive for perfection, and we want all our users to be in the know when we cannot post.
By Andrew at 4:26 PM No comments: Links to this post

After a substantial outage, Blogger has been able to resume operations, including posting abilities.
We apologize for the inconvenience, but assure you that regular posting abilities are back.
By Andrew at 4:09 PM No comments: Links to this post