New Developments Strengthen Argument for a Cold Winter Ahead

New and exciting data has been uncovered in recent days that not only has strengthened my analog set for the winter, but has also cut down on a good deal of uncertainty I had up until this point. 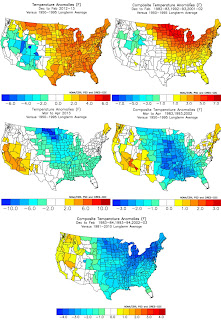 This image, put together by Accuweather Forum user Noreaster07, shows a total of five images. The top two images show temperature averages for the winter of 2012-2013 on the left, with the temperature average of the winters of 1982-1983, 1992-1993, and 2001-2002. Both images show a clear warm weather trend over the United States. Moving ahead to the second row of images, March-April temperature composites for this year (left) and the three aforementioned years (right) are shown. Oddly enough, there is another clear similarity between the images. On the bottom image is a composite of winter temperatures for 1983-1984, 1993-1994, and 2002-2003. If the similarity trend continues between these three years and the current year, this would only add to an increasing amount of evidence suggesting we could see a colder winter ahead.

But here's what really excites me: when compared, the winters of the fifth image on the portrait above are similar to my analog set in the mid-latitude atmospheric flow.

1. Active East Asian Jet Stream
You can see deep negative height anomalies in East Asia on both images in the above composite. This symbolizes the jet stream is under stress, thus increasing its strength in that area. From looking solely at the image above, it would appear pressure anomalies are below normal in East Asia, meaning more storms in that region. If you have been with this blog for a while now, you may recall the times I have brought up a correlation between storms in East Asia and storms in the East US 6-10 days later. If the tightening of the jet stream in E. Asia is due to a stormier pattern in that area, it is entirely possible we see a stormier East US. This stormier East US could also then lead to higher probabilities of Nor'easter's.

2. Ridging Pattern in Northern Pacific
It is well established that the Bering Sea is a favorite place for the origination of sudden stratospheric warmings (SSW's), a phenomenon that involves rapid warming in the stratosphere that then allows unusually cold air to reach the surface and lower latitudes just a couple of weeks later. Last winter, we saw a magnificent SSW originate from the Bering Sea, and other warmings attempt to take place in that same vicinity. With positive height anomalies stationed over the Bering Sea, intrusions of warm air by these positive height anomalies into the Arctic are more easily accomplished, thus increasing the likelihood of SSW events. Both my analog set and the other three years are steadfast on strong Bering Sea high pressure, meaning the chances of stratospheric warming events are enhanced, thus leading to higher chances of cold weather.

4. Low Pressure in Eastern North America
Both images show very strong low pressure anomalies across the Central and Eastern US. This comes as a result of the ridging in the Bering Sea/North Pacific and another significant high pressure anomaly in the Atlantic (for my analogs, it's over Greenland; for the other three years, it is in the north Atlantic). The most significant result of these negative height anomalies over the Central and East US is very cold temperatures, and these are seen in the last image on the picture at the top of this post, as well as in my analog set, shown below:

Andrew
By Andrew at 7:01 PM 6 comments: Links to this post