An accumulating snow event will occur in the Mid-Atlantic in coming days.

It appears that two pieces of energy will combine in the Mid-Atlantic, a byproduct of a clipper system coming from Canada and another piece of energy from the Plains. These two will combine offshore (or very close to the ocean) and produce an accumulating snowfall across the region. Amounts are expected to be on the lighter side, with a trace to 2 inches expected across Pennsylvania, Maryland and eastern Kentucky, to name a few states. Ohio may also get in on the snowfall. Two to four inches could fall in West Virginia and Virginia as a result of this disturbance. Again, nothing major, but enough to bring out the snow plows and shovels to do some clearing.

Andrew
By Andrew at 6:06 PM 5 comments: Links to this post

Email ThisBlogThis!Share to TwitterShare to FacebookShare to Pinterest
Related: Mid-Atlantic 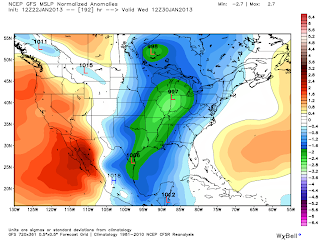 I am monitoring the potential for a winter storm from the fluid timeframe of January 31 - February 2.

It does appear that a storm system will be delivered upon the Southwestern US in the closing days of January, and will subsequently move east. This storm was discussed in an earlier post, but again, a strong storm system could eject from the Rockies and center itself over Gary, Indiana, as shown in the above forecast for January 30th. This forecast displays mean sea level pressure anomalies, with cool colors displaying low pressure areas and warm colors indicating high pressure areas. However, look closely at that second low pressure system that has formed right over Brownsville, Texas. This storm system appears to be on the tail of the dominant storm system of Gary Indiana, and that's where our story begins. 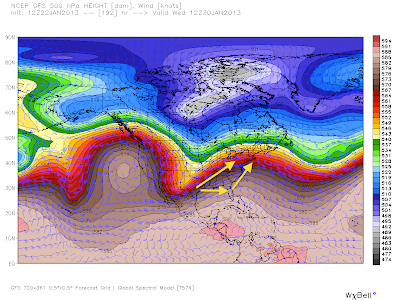 The 500 millibar pattern for this timeframe suggests a strong high pressure system will form over the northeast Pacific and West Coast in a classic pattern called the 'positive Pacific-North American pattern', or Positive PNA for short. In a positive PNA, high pressure forms in the aforementioned areas, and, as a response to the jet stream shooting north to get around the high pressure, it must collapse down into the southern Rockies as a response, creating a very favorable set-up for storm systems impacting the Central and East US. This idea is displayed well in the 500mb pattern shown above, which is valid for the morning of January 30th.

Now, the storm system is clearly shown by the dip in the colors on the map above (depressions in lines and colors show low pressure systems, arching patterns indicate high pressure), and is placed in western Texas. Let's revert back to our positive PNA pattern. The first part of the pattern (where high pressure was placed out west) was already explained. But, there is another, more important factor that concerns storm tracks of systems emerging from the Southwest. In a positive PNA, high pressure will tend to form in the Southeast US. This persistant high pressure system is also called the 'Southeast Ridge', a name that lives in infamy for those in the Northeast, as it diverts storms away from that region. However, the phrase lives in glory for its winter storm capabilities in the Central and parts of Eastern US. I drew three arrows in the map above; the single arrow represents a rough sketch of what the system would do if it abides by the positive PNA, while the set of arrows that crawl up the East Coast demarcate what the system would do if it managed to bypass the Southeast Ridge.

This is going to be a very potent time period, and the dates of this are very fluid. We will need more model runs to either confirm or deny the potential of such an event occurring, but right now, things are looking up for the snow-starved Midwest if this model forecast is to come true.

Andrew
By Andrew at 5:47 PM 3 comments: Links to this post 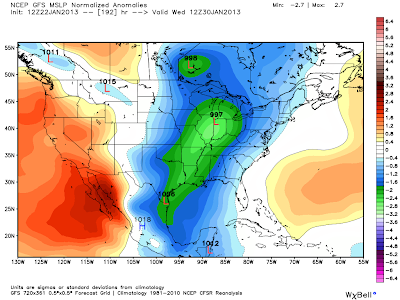 There is potential for a winter storm during the timeframe of January 29-31. The models have been hinting at this for quite a while, so let's discuss.

This system will be shot out of the central Plains to begin the whole fiasco. The GFS model forecast of mean sea level pressure anomalies shows that, by the morning of January 30th, the storm system has developed into a very strong system centered over Gary, Indiana. This would provide snowfall to the Upper Midwest and parts of the Northern Plains. However, there is another low pressure system that has developed just around of Brownsville, something we need to keep an eye on. That low pressure system, should history be an indicator of what could happen beyond this image, could develop into a coastal storm if it keeps a low profile as it moves along the Gulf Coast and is strong-armed into moving north in response to high pressure already east of Cuba. But, beyond this image, I am not confident in model forecasts that could explain it.

So, using what little information we have, there is potential for a storm system to develop and possibly bring some accumulating snow to parts of the Plains and Midwest.

Andrew
By Andrew at 5:47 PM 2 comments: Links to this post