THIS IS NOT AN OFFICIAL FORECAST. The Final 2012-2013 Winter Forecast still stands- this is an update on my thoughts but is NOT composed of my official thoughts... yet. 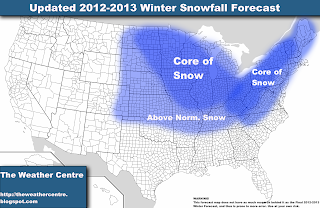 This is an updated forecast of what I am expecting in terms of snowfall this winter. Please note that this forecast does not have as much research behind it as our Final Winter Forecast, so use at your own risk.

I am forecasting above normal snowfall for much of the Plains, Great Lakes, Midwest, Ohio Valley and parts of the Northeast, with the core of the snow hitting the Midwest and Plains. Here's the lowdown on why:

1) Lezak Recurring Cycle. As I posted in this recent post, there has been a favoring of precipitation over the northern Plains, Great Lakes and Midwest. This means that there should be quite an active period for those regions at least twice this winter, possibly bringing some very heavy snows with them. Additionally, the presence of cold air that may be tied into the LRC would enhance snowfall potential over these regions.

2) Possible Rebounding La Nina. As I posted today at this link, there is a new trend of cool water anomalies just off the coast of South America and likely associated with the ENSO pattern. A La Nina favors the Midwest and Ohio Valley for snowfall. Based on how global wind patterns have been characteristic of a La Nina recently, it is possible we could see La Nina effects in the USA as well, hence the 'core of snow' region lodged in the mentioned areas.

3) No More El Nino. The El Nino is gone, and there are very little effects of an El Nino worldwide. Because an El Nino favors the East Coast for snowfall, this reduces the chances for above normal snow.

I would like to remind everyone that THIS IS AN UPDATE and DOES NOT RESEMBLE my OFFICIAL THOUGHTS. My official thoughts remain in the Final 2012-2013 Winter Forecast. I will have my latest official thoughts out by the end of this month.

Latest indications from the Equatorial Pacific are that something significant is happening. Let's get right to it.

This image is from the Climate Prediction Center, showing the latest Observed Sea Surface Temperature on top and sea surface temperature anomalies on the bottom. I outlined a region on the bottom image showing what I am so concerned about.

Do you see that blue area off of the South American coast circled in black? That is what very well could be a La Nina. This is the same phenomenon that was observed in the winters of 2010-2011 and 2011-2012. Now, this could indeed just be a quick cool down of a specific part of the ocean. However, I have reason to disprove this.

2) This has been a sustained cooling. This appearance of cool water was not sudden. It has been developing in the last few weeks, more significantly this week and last week than in the past while. Given that this was not a sudden appearance-disappearance case, I find the case of a possible La Nina strengthened.

3) Global wind anomalies favor a La Nina. In this post published not too long ago, I highlighted regions that are showing typical La Nina characteristics. The observation of La Nina signals worldwide and this new development give me a stronger indication that this may be an emerging La Nina.

Underwater anomalies are still suggesting that El Nino-status waters remain present. It will take another few weeks to determine if these warm waters take down the new cold pool or are beaten by what could be a newborn La Nina.

The LRC pattern is giving up hints on who could get crushed this winter. But before we get into any of that, what exactly is the LRC?

The LRC, or Lezak Recurring Cycle, is an annual pattern that sets up during the fall and is present into the following spring. This pattern cycles, or repeats, every 40-60 days. Each repetition is referred to as a 'cycle'. The length of each cycle varies each year, and NO PATTERN IS THE SAME from year to year. The LRC tracks storm systems and high pressure systems, repeating them through each cycle. However, these apparati will change location slightly and change strength with each cycle of the LRC.

Let's start out this investigation by taking a look at what has happened in the nation throughout the past several weeks.

In all three pictures above, you can clearly see several storm systems on the map. However, there were strong storm systems in the Midwest and Northeast for these periods, with a few cut off lows just off the Southwest coast. During these three images' timeframes, the northern half of the country (as well as the Plains) got smashed with several inches of precipitation, with over 2 inches in some areas over the Midwest.

The new Lezak Recurring Cycle for 2012-2013 appears to be setting up, and people in the Accuweather Forums, as well as the inventor of the LRC, Gary Lezak himself, are buzzing about it. This latest blog entry by Mr. Lezak indicates that the LRC is indeed showing itself, as this quote from his blog demonstrates:

Energy coming over the Pacific Northwest coast this morning will begin diving south over the plains states tonight.  This is not necessarily the greatest sign for this year’s weather pattern, as this is the third storm to dig into this position, which strongly implies that we have a pattern setting up with a long-term long-wave trough northeast of Kansas City. I would love to see some energy digging into the western states or Rocky Mountains, but recently this has not been happening.


You're probably thinking "So what? Why should I care about just a pattern?"

Well, the Lezak Recurring Cycle has historically helped predict who could get the most snow during the winter, as the storms typically follow their paths in past cycles. For example, if a storm were to go through the East Coast and it was in the LRC, 40-60 days later would see the same piece of energy hit the generally same area.

The presence of so many strong storms in the northern half of the nation suggests to me that the Plains, Midwest, Great Lakes and Northeast are in for a quick start to winter. Keep a close eye on early December for these same pieces of energy to hit the mentioned regions...possibly with snow this time.

Andrew
By Andrew at 4:27 PM 2 comments: Links to this post