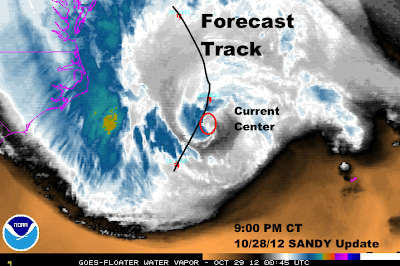 500mb analysis does show that Sandy may be beginning to take on a negative tilt, a consequence of Sandy merging with a second system that will provide the base for this decade's first (and hopefully last) superstorm. This will be significant and lives will be threatened. Here's some words of wisdom from the NWS Mt. Holly office: 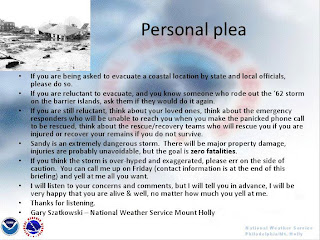 My afternoon thoughts still stand, and here's the overall graphic from the afternoon. 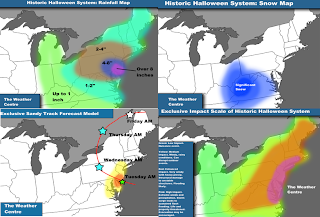 Andrew
By Andrew at 8:58 PM No comments:

The following areas are under Mandatory Evacuation orders:


IN NEW JERSEY:
-Islands from Sandy Hook to Cape May
-Areas east of Watson's Creek

IN NEW YORK:
-Low-lying coastal areas in the five boroughs

The following states are under States of Emergency:

If you are under a state of emergency, prepare for a weather event that could put your property or life in danger. Take all necessary precautions to ensure your safety. If evacuation is recommended, it is advised you heed all government warnings to keep yourself safe. Do not waste time or take chances- this event has the potential to damage property and threaten lives.

"This is unlike any storm I have witnessed in the last several years."

Hurricane Sandy is expected to merge with an incoming disturbance currently progressing east across the nation. As this merge occurs, the now-singular storm system will rapidly strengthen and pose life-threatening conditions to much of the nation's population. Let's break it down. 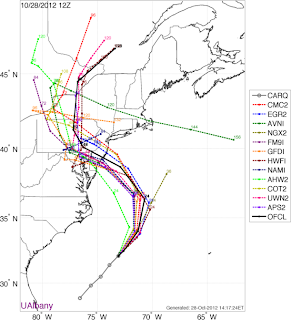 Model guidance suggests a consensus has formed as far as where Sandy will make landfall. The majority of models used in today's latest 12z suite are saying a landfall on the tip of south New Jersey and in the Delmarva area is likely. Considering this consensus has been holding for quite a while now, I have faith in it and believe this is a likely scenario. 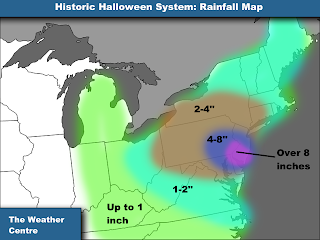 Rainfall will be a big problem, especially right along the coast. In much of the northeast quadrant of the US, I am anticipating under an inch of rain with isolated spots breaking that 1 inch barrier. In the Northeast and Mid-Atlantic, however, 1-2 inches is likely. But it doesn't stop there. The Mid-Atlantic as a whole should surpass the 2 inch mark, and coastal areas in or near the Delmarva region could get as high as 8 inch totals. The real problem comes at the point of landfall, where I believe over 8 inches of rain is likely. Unfortunately, this will lead to flash flooding that will stick around for a while. Because the storm will be pushing water inland, the flooded areas will not be able to get the water out until the storm has moved further inland, a feat that should take a day or two. Then, only time will tell how long flooded neighborhoods will take to be dried out. 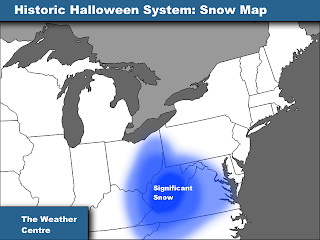 This event will have a snowy side as well. As this superstorm moves inland, cold air will be pulled south from Canada in response to such a strong storm. This cold air will sweep into the southwestern flank of the system and penetrate into the heaviest precipitation areas. This will lead to chances of snow across parts of the Ohio Valley and Mid-Atlantic. However, a significant snowfall is likely in the mountainous regions, where some models are showing over 2 feet of snow!! Personally, I believe snow on the order of 6-18 inches is likely, but some spots could break that 2 foot mark. 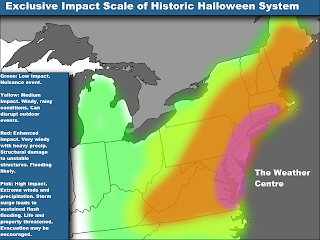 Our Exclusive Impact Map shows a High Impact event will unfold across the Mid Atlantic and coastal areas of the Northeast, as the very strong system, combined with storm surge makes for a life threatening event in the pink areas. Enhanced Impact areas have been marked across much of the Northeast and Mid-Atlantic as well, where slightly lesser effects of this superstorm will be felt. However, don't let your guard down- this is quite an unpredictable storm.

State of emergencies have been declared, and transportation systems are shutting down. You need to be evacuated if a mandatory evacuation is given. For those of you thinking 'This is just a strong Nor'easter', you are wrong. This is the closest thing to the 1991 Perfect Storm we have seen since 1991. This isn't a time to take chances. The effects will be big and bad, and lives will be at risk.

Andrew
By Andrew at 3:21 PM No comments: