I am seeing increasing signs that a sudden stratospheric warming is about to take place in the upper stratosphere.

Shown above is an animation of 10 millibar temperature anomalies in the stratosphere. As I alluded to in my February 24th post, the Himalayan mountain range is a natural geographic instigator for these sudden stratospheric warmings. The enormous warming event we saw in January originated from the same mountain range we are now seeing this impending mass of warmth. Analyzing the above animation shows us that this warming event has been in the works since the beginning of February. In recent weeks towards mid and late February, we saw strengthening of this warming, and it became clear to me that this was not just a quick warming event. In my opinion, if you see a warming event over the Himalaya Mountains and it is sustained and strengthening, there's a solid chance that a sudden stratospheric warming could emerge from that situation.

The reason I am suddenly on what you may perceive as high alert is because of the last frame of this animation. If you look closely, you can see the pulse of warm temperature anomalies suddenly flare up over the Himalayan mountains, a sign of possibly sudden strengthening of this warming mass. This body of upper stratospheric warmth may very well be in its final stages of formation and the beginning stages of possible propagation to the Arctic, where the sudden stratospheric warming event could then take place. The warm air in the stratosphere would then push cold air down to the surface, and we could see that cold air hit the surface in the next 2-5 weeks, right around the start of severe weather season. If this cold air is able to come close to the US, or even penetrate through the nation, chances are the severe weather risk and winter weather risk would be heightened. I will explain more later on.

Andrew
By Andrew at 4:48 PM No comments: Links to this post

Note: This will not be a full-blown Nor'easter. 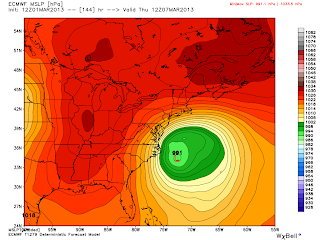 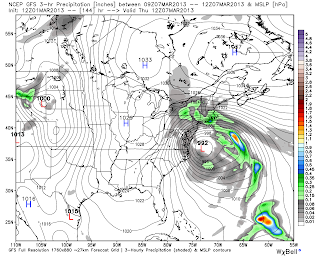 Both major weather models are pointing towards a late-season partial Nor'easter that would be spit out of the Mid-Atlantic to dump snow in New England before moving out to sea.

Shown above is the European model's (top) forecast for mean sea level pressure about 7 days out. The bottom image shows mean sea level pressure and precipitation, again for 7 days out. Analysis of the two forecasts reveals that they are similar in both strength and placement of this storm. To have both major weather modeling systems in agreement at this point in time is certainly a good sign for those wanting snow in the Northeast and Mid-Atlantic.

With that agreement noted, I have opted to show the 48 hour accumulated snowfall forecast from Hour 156. We can clearly see a major hit of snow for Pennsylvania, New York and maybe a sliver of New Jersey, while coastal states are in the no-snow zone, as a typical Nor'easter will do. We see amounts exceeding one foot of snow, and these totals are centered in southern New York into eastern Pennsylvania. Major amounts of 6-12 inches are still found widely across New York and in the middle of Pennsylvania, as well as western Massachusetts and one or two other coastal states. Lower amounts below half a foot are found widely across the Northeast into the Mid-Atlantic.

Right now, such good model agreement is certainly a good sign for the above forecast to work out but we are still over 5 days away. That's a lot of time for things to change, and the system hasn't even gotten into the nation's upper air network, where the weather balloons can get data from the storm and put it into models to enhance forecasts.

Despite all the caveats, I feel confident in my call for all in the Northeast and Mid-Atlantic to keep one eye open on this system. It has good potential to bring heavy, wet snow to parts of the regions mentioned above, and must be monitored.

Latest model forecasts are indicating the potential for a band of heavy snowfall to set up from the Plains into the Midwest and Ohio Valley during the timeframe of March 4-6.

Shown above is the snowfall forecast from the American model. It shows a corridor of heavy snow extending from Montana through the Plains and into the Midwest as a weakening trend hits. Some more enhanced totals are seen in southern Indiana and Ohio before the system transfers offshore of the East Coast, which is a post for another time. The snow would definitely be heaviest in the Plains as of current thinking, and these totals could very well exceed half a foot, with some spots reporting isolated totals very close to or just over one foot.

Contrary to the current belief, this system is not an Aberta Clipper. It is a regular storm system that happened to come onshore in Canada rather than the Pacific Northwest. Considering we remain a fair time out from this situation, and models are notorious for having issues with heavy snow in narrow corridors (as is to be expected), I think it is best to not make a preliminary map and instead cautiously go with the above snowfall forecast. This is not my forecast, but it does echo where I think the snows will fall. If models can show that they are rock solid with this heavy corridor of snow in the next 24 hours, I will most likely have a map out tomorrow.

Andrew
By Andrew at 3:32 PM No comments: Links to this post