This is your July 4 Forecast, brought to you by The Weather Centre. 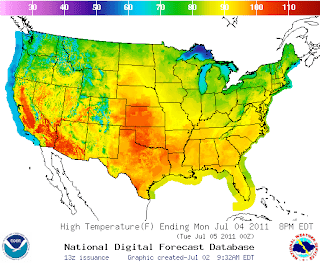 Temperatures for your Fourth will be comfortable in the Northeast, where temperatures will rest in the 70's, and some places reaching into the low 80's. The Midwest will have similar conditions, but more widespread areas of 80's. The Southeast will bake with the entire region in the mid 80's, some spots even flirting with 90 degrees. The South Central region of the US will surpass 100 degrees in many spots of Kansas, Oklahoma and Texas. Sections of Louisiana could also experience this extreme heat. Even hotter temperatures will dominate in Phoenix and surrounding areas in the Southwest US, while the Northwest will settle with 70's and scattered spots of 80's. 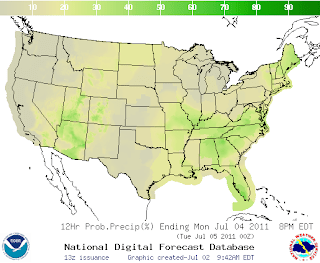 The probability of precipitation will be elevated in pretty much all of the Southeast as a cold front dips into the area. That could and likely will hamper July 4th fireworks. In Arizona, where fireworks are banned, there will be a threat for precipitation, which is good considering the state is in a drought, wildfires are ongoing, and fireworks are cancelled anyways. The North Plains and Northeast will have some potential for rain as low pressure impacts the Northeast, and a cold front sweeps the North Plains. Sky cover will be a gamble in the Southeast as the cold front affects the region. It does appear the storms will be more pop-up like, so fireworks remain a possibility and picnics could go as planned. The North Plains and Southwest will also have clouds in at least one state in each region. 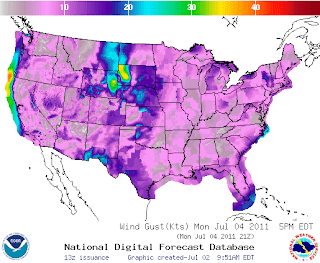 It will be very windy in the North Plains such as South Dakota, Nebraska, Montana, Wyoming. There will also be some sections of higher wind in Texas and Oklahoma. The rest of the US should have winds from 5-10 mph.

The Weather Centre wishes you a safe and happy Fourth of July.
By Andrew at 9:52 AM No comments: