I am looking at the potential for some possible severe weather come the Saturday-Sunday timeframe this weekend. Let's take a look at the models.

The 12z GFS is indicating that a squall line is to form in east Texas and east Oklahoma into western Arkansas/Louisiana/Missouri on Sunday, March 11. It looks like a storm system will eject eastward from the Southwest and make a boundary of sorts that will crash into warm, humid air brought north from the strong high pressure system in place on the East Coast.
Judging by the colors on the map,  it looks to be a pretty linear squall line which would somewhat discourage super cells in a linear format. However, this is a fairly low resolution image, which means that those green areas in the rest of Arkansas could be several separate storm cells.

The 12z NOGAPS also has a linear squall line hitting the South Plains, but it looks like that the squall line may be stronger according to the additional colors in west Arkansas. Also interesting is the stretch of intense precipitation north into the High Plains. This could have some interesting effects if it were to verify. The more important piece from this image is how the storm system appears to be located in north Oklahoma, almost identical to the GFS. However, I cannot exactly locate where the center is, so that is not a definite comparison.

Canada's GEM model is also portraying a squall line, but further west than what the other two models are showing. The GEM model has the storm's minimal pressure in the eastern half of Texas, farther south than the NOGAPS/GFS are showing. The GEM has always been more of a 'funny' model than much of a serious one, so for now I am discounting it. However, every model is always worth looking at, and maybe the GEM is onto something.
Either way, there remains a consensus of possible intense precipitation in the South Plains.

Here's the laughable JMA model, from the Japanese Meteorological Agency. It is never trusted, and as you can see, here is why. It is showing a snowstorm of over 5 inches in Kansas and Nebraska, as well as an extreme squall line in Arkansas and Louisiana. The JMA may even be showing a tropical system offshore Florida, but that is a whole different situation. Don't even try to take this model into account- I never do and likely never will. This is more of a just-for-looks image. However, it still falls in line with a squall line in the South.

As for the indices that can predict severe weather, there does appear to be CAPE values of up to or over 1000 j/kg of instability in Texas, which would be sustainable for general thunderstorms. The Lifted Index (LI) for this time frame is not impressive, with the lowest values of down to -4.
The 12z GFS is showing a weak atmospheric cap present over the area at hour 144, but nothing that a squall line shown above could be stopped by.
The thing that gets pretty concerning in my eyes is how deep layer shear (DLS) may be over 70 knots, which is pretty concerning for a possible tornadic scenario. Contributing to that is a 60 knot lower level jet stream and a jet stream wind speed of over 90 knots.
Something else I want to mention is how the GFS is showing 925mb level winds over 50 knots, which is pretty significant.

I will leave you with this forecast hodograph (detects possible rotation in the atmosphere, shown as a circular shape) from the 12z GFS in west Arkansas. 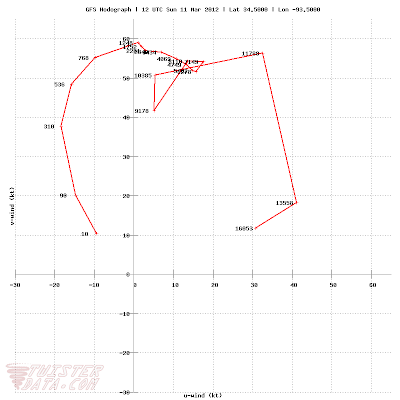 The NAM is forecasting the development of a linear band of showers and thunderstorms from Oklahoma to Canada. This will be as a cold front comes through to end some warm weather in the lower Great Lakes, South Central Plains and areas to the east.

Luckily, this will not be a severe weather threat. There looks to be minimum instability, maybe even the atmosphere trying to prevent thunderstorms from forming. Either way, there will not be any instability on any level to be able to initiate stronger storms for this event.

There will be the issue of mixing precipitation in west Oklahoma and west Texas to all snow in southwest Kansas. There could be some slick conditions in those areas due to the system trying to initiate some mixing and snowfall behind it. For now, snow accumulations look to be low, with snow depths ending up at around 1-2 inches.