Where Could The Polar Vortex End Up? 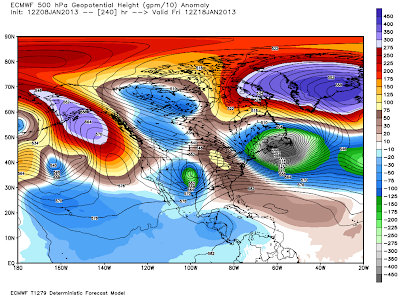 The latest ECMWF model forecast from Europe is showing the polar vortex (what makes the Arctic as cold as it is, not including the presence of a tundra landscape) sitting over Nova Scotia, Canada and the Canadian Maritimes. This solution would bring incredible cold and wind to the Maritimes, while a negative NAO rages, high pressure builds over the Arctic and a sliver of energy still remaining in Canada tries to build the vortex back up. What an incredible solution this would be if it verified.

But the truth is, models are horrible at handling pattern changes, so it's best we turn to ensemble forecasts. 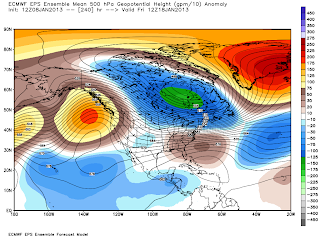 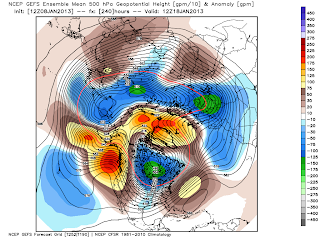 The top image shows the ECMWF Ensemble prediction system, commonly called the ECMWF EPS (or just EPS for short) forecast at 10 days, and the GFS Ensembles (GEFS) are shown on the bottom, also valid 10 days out. These forecasts are showing 500 millibar height anomalies, where low pressure is shown in cool colors and high pressure in warm colors. Both ensemble sets agree on the polar vortex dropping down into Canada enough to bring the North US some serious cold, but nothing historic (nothing historic has been expected thus far- just serious, harsh cold). I feel like this will be a long-lasting event, with the sudden stratospheric warming's effects lasting for a couple weeks. This means, rather than one big cold shock, it appears possible that waves of cold will penetrate the nation, each wave spreading more and more cold around.

This is still a while away and the models remain without a consensus, so I will be updating you on the possibilities as this forecast time comes closer.

An incredible Sudden Stratospheric Warming (SSW) event is ongoing at this time, and latest observations around the stratosphere have historic values in the upper stratosphere and off-the-charts warmth being observed.

We start now with an animation of observed 10 millibar temperature anomalies. You can see how this SSW develops off the Himalayas and explodes around December 26th. In the last days of 2012, it begins to shift towards the Arctic, and we are now at a point that we have a historical sudden stratospheric warming ongoing. Why is it historic? See the chart below:

This chart shows 10 millibar observed temperatures for 2012 and 2013. You can see this immense SSW event shown on this chart on the red line. The dashed green line signifies the average conditions in the stratosphere for that time of year, while the gray lines show the highest or lowest value the temperature was at for any year between 1979 and 2008. If you look closely at where the red line is now, you can see it has broken through that gray line, and has thus set a new record for warmest stratospheric temperature for this day/few days at the 10 millibar level. Looking ahead to the next few days ahead of the red line we see higher records of stratospheric warmth, meaning the SSW will have to be stronger to set more records. Is it possible? Of course- the warming only reached the Arctic today, even though the animation goes up to January 6.

The scope and intensity of this SSW is displayed in the latest observed temperature image from the North Hemisphere at the 20 millibar level, not far from the 10mb level.

The colors show temperatures in the 20mb level of the stratosphere. Because this is a sudden stratospheric warming, we will see warm temperatures come up in the phenomenon's presence. The large swath of black depicts off-the-charts warmth being observed in the Bering Sea and North Asia. The pressure lines indicate the polar vortex has already suffered a split in the upper stratosphere, with two areas of tightened circles showing up in Canada and Europe. This is keeping the ball rolling with my severe cold prediction for Late January.

Lower levels of the stratosphere are also experiencing an incoming warming event with a finger of warmth beginning to propagate to the Arctic, as shown in the 30mb animation and 50mb animation below:

Also supporting my prediction of a polar vortex collapse and late January cold is the observed spread of anomalous warmth through the entire stratosphere as shown below:

This chart is printing out temperature anomalies for January-March of 2013, hence why it is barely colored in. But despite the small area of color, the trend of warm colors blossoming from the upper stratosphere and moving to the middle stratosphere is obvious and very clear to see. If this warming continues (which is expected, with another incoming mid stratospheric warming and incredible upper stratospheric SSW), the polar vortex will continue to suffer, and warmer colors will be shown on this chart above.