The image shown above is the 500mb height forecasts for 'Day 7', roughly a week out. At the 500mb level, one can detect low pressure systems when the lines are depressed into an upside-down arch. Ridges of high pressure are indicated in right side up arch formations.
In this forecast, made by the NCEP Superensemble, we see a very strong storm system swinging south which will likely shift into the Southeast. The ridge in place over the Central US will be shifted east or north with the invasion of this storm system.
I am worried about this right off the bat, considering that this strong a storm system will most likely latch onto the jet stream and stress it to increase wind speeds. Humid and warm air will boost instability in a scenario seen all too much this spring.
We have yet to see if this will verify, but the ensembles are very interested.

Andrew
By Andrew at 6:40 PM 4 comments: Links to this post

The next 8-10 days are looking to be relatively quiet in terms of severe weather for the nation, as a strong vortex in the Gulf of Alaska looks to weaken and may also weaken storms that pass through the Southwest. That's where the 'quiet' part ends and the 'relatively' begins.
As you can see, there is a deep depression off the coast of California. This signifies the presence of low pressure systems in the area. Storms that form in that region typically shift east into the Southwest, where those storms have traditionally been known to then move east into the South Plains and fire up potentially strong storms. Notice the arch in the Southern Plains. This indicates the presence of a ridge of high pressure, which carries warm, humid air from the Gulf of Mexico within the region. Should storm systems move into the Southern Plains, the ridge would move east or north, and essentially form a frontal boundary which would bring north warm and humid air into the Southern Plains. A dry line would already be in place over west Texas. Saying that the storm system progresses east, and the cold front follows, severe weather may very well initiate.
But- let's not get ahead of ourselves. Gazing over the anomaly correlation (a verification tool) gives North America a verification score of roughly 75% over the past 2 months, give or take a week. Now- 75% may seem low. But, remember that the atmosphere is potentially the most complex mechanism known to man, maybe second to the universe itself. Having to keep track, and then forecast, an entire continent is an extremely hard task. Now, 75% seems pretty impressive. Of course, models can do better, but 75% is a fair score.

Side notes
•Expect a May outlook being formed over the weekend and likely up for release the following weekend.
•The 'Place to Be' is once again up and running. It gives the best weather place to be in the nation for the day.
•My apologies for the absence of forecast discussions. I am working to get them up and going again.

Andrew
By Andrew at 4:09 PM 7 comments: Links to this post

Today's Place to Be is Laredo, Texas. 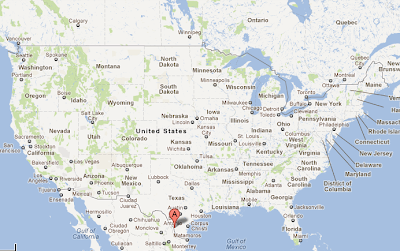 By Andrew at 6:29 AM No comments: Links to this post