I had been heralding this winter as one that would vindicate the winter (or lack thereof) of 2011-2012. I explained how multiple atmospheric factors were supportive of a much better pattern for cold and snow across the nation. But that never materialized. Today, on February 10, 2013, much of the nation is again well below normal on winter snowfall. It's time to see where I went wrong.

The first thing we must review is the El Nino-Southern Oscillation, or ENSO index. This index tracks the anomaly of sea surface temperatures in the Equatorial Pacific. Above normal temperatures are known as El Nino's, and below normal sea temperatures are referred to as La Nina's. This winter, the eastern Equatorial Pacific did not have a specific water anomaly. It was neither above or below normal. This is called a Neutral ENSO situation. In Neutral winters, the atmospheric pattern is much harder to figure out. The ENSO stage really drives the overall pattern of each winter, so a neutral ENSO winter means the forecasts become much harder to predict, as we observed this winter. Due to a lack of a defined ENSO stage, more mesoscale patterns are left to drive the winter, and we observed this with the unfavorable Pacific pattern ruining winter.

Taking a look up towards Greenland, we find a very favorable last 60 days. High pressure tended to stick around that region, which is called a negative North Atlantic Oscillation (NAO). In the negative NAO, high pressure forms in Greenland and storms tend to follow the Nor'easter track. Cold weather is encouraged in the Northeast as well. If you're now wondering why that didn't all occur with such a favorable negative NAO, just look at the Pacific and there's your answer.

This Pacific pattern can also be blamed on the negative Pacific Decadal Oscillation, or PDO. In a negative PDO, colder than normal water temperatures are present in the Northeast Pacific. This encourages low pressure formation in that area, which can then shift onshore into the West US. This onshore shift creates that low pressure in the West, high pressure in the East situation that we discussed earlier. I did make a note of it on my final winter forecast (click here), but did not emphasize it enough. It is clear that, had I put more emphasis on the negative PDO, my forecast would have been milder and thus more accurate of this winter.

These were my two analog packages for the winter of 2012-2013. I used winters that had a weak/moderate El Nino after 2 La Nina's. This was before it was clear that there was not going to be an El Nino and that there would be a Neutral ENSO state instead. My precipitation analog image (top) turned out to be a solid failure. My analogs predicted below normal precipitation in the Ohio Valley and Midwest. That did work out in most areas, but a spot of above normal precipitation in North IL and parts of Indiana didn't make it as accurate as I wanted it to be. 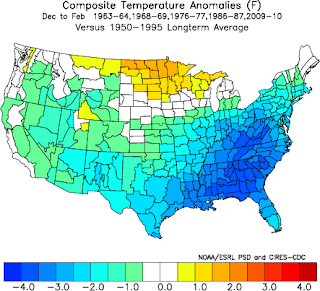 My temperature analog forecast, pictured above, was a massive bust. Warmer than normal temperatures prevailed across basically the entire nation for January, with the Ohio Valley and Midwest getting the worst of it. The Northern Plains didn't even work out for December- that region was slightly below normal. Although the January data isn't in yet, I have a feeling above normal temperatures will be across the board once again, further hurting my analog years' forecast.

One big component I was counting on to really bring in the cold for the nation was Siberia. As many of you may or may not know, snow cover anomalies in Siberia during the month of October can help predict the following winter's temperatures over North America. You see, these snow cover anomalies then have implications on the Arctic Oscillation. If half of the month of October had below normal snow cover, one would expect the first half of the following winter to have a positive Arctic Oscillation (a.k.a. warm temperatures). In October 2012, we had very below normal snow cover for the first half of the month. This actually did correlate nicely with that part of my winter forecast, which called for a warm December into January. However, the back half of October had very above normal snow cover, and made me think that the last half of January and all of February would be colder than normal for the US. Well, we did get some better shots of cold air, but the pattern was (and still is) too progressive to entrench any solid cold air. I think this part of the Siberian-based forecast will fail for February.

If I were to rate my winter forecast thus far, with all variables used in my forecast considered and my forecast for the rest of February included, I would have to grade this as a D on the basic school grading system. I feel that the success with December from Siberia pushed it up from an F, but other than that nearly everything else went haywire and did not end as I had expected.

I am not quitting my long range forecasting, this is just one of those years. We look to have a new ENSO state going into summer, so that could very well help in the winter of 2013-2014.

Prognosis... Blizzard event continues in the Northern Plains. Low pressure system down to 992 millibars is centered in Nebraska. Heavy snow is ongoing in South Dakota into Minnesota. Heavy rain showers are also occurring in southern Minnesota into Iowa and Illinois. Mixing precipitation is occurring more-so into northern Iowa and Minnesota. Further south into the South Plains and by the Gulf Coast, severe weather is ongoing. A squall line of heavy thunderstorms is present in eastern Texas and northern Louisiana. East Arkansas into western TN/KY are other states experiencing some form of thunderstorms. A small, weak area of lower pressure centered south of Houston appears to be connected to this main storm system. High pressure in the Mid-Atlantic will be pushed east as the squall line progresses east and the main storm system shifts north and east.
By Andrew at 11:12 AM No comments:

Several model runs have been toying with the idea of a potentially major winter storm during the timeframe of February 19-22. Let's dive right in.

We'll start with a recent run of the American GFS model. Here, we see a very strong storm system centered in southern Illinois. The solid blue freezing line is far enough south for the Lower Great Lakes and parts of the Midwest to get snow. If we compare the precipitation forecasts to the legend, we find that cities like Chicago and Quad Cities may get 1.25'' to 1.50'' of water, which would equate to 12-15'' of snow for those areas. This particular forecast is valid the early, early morning hours of February 22nd. For you children wondering if this would cause a snow day, I can tell you right now yes it would. However, we are a long way out, and this solution will likely not happen.

We now move onto a more recent run of the GFS model, now valid for the evening hours of February 22nd. We see there is still a strong storm system in the area, but the system is further north and east than the earlier forecast. Precipitation is much more toned town, but heavy accumulating snow would still be falling in southwest Wisconsin, north Illinois and east Iowa. Those regions would see above 5 inches of snow in many areas, possibly more than 7 inches in the lighter blue. Again, we are a long time away and this will also likely not come to fruition. However, if I had to choose between the above forecast and the image at the very top, this one is more likely to actually happen.

These two images are forecasts from the GFS Ensembles averaged out for mean sea level pressure, 850 millibar temperatures and precipitation. Each image is from a different forecast, not just one model forecast for different times. The images are indeed pretty different, but do print out the same solution: There is potential for a storm in the area around this timeframe. The top image is much drier than the bottom, and the low pressure center is centered in Gary, Indiana. The bottom image holds much more precipitation, and the low pressure center is down on the southern Illinois/southern Iowa border. The presence of ensemble support adds confidence in a situation i'm not that optimistic in to begin with. 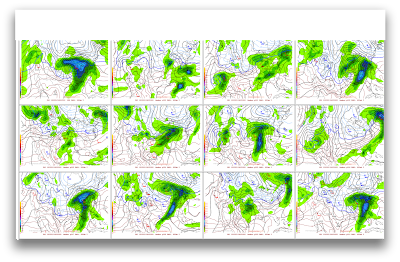 This image is of individual GFS Ensemble members from the very top image. If you look closely, you can see that top image in the upper right hand corner of this multi-panel forecast. The other ensemble members do show a winter storm, but to varying degrees of strength. Low pressure placement is also a component that is not resolved. Both issues are expected to occur, as we are still over 300 hours away from this potential event. I will need to see many, many more model and ensemble forecasts that support this idea before I can gain further confidence in this matter.