Once again, we're looking at the possibility of a significant snowstorm in the Southeast US. 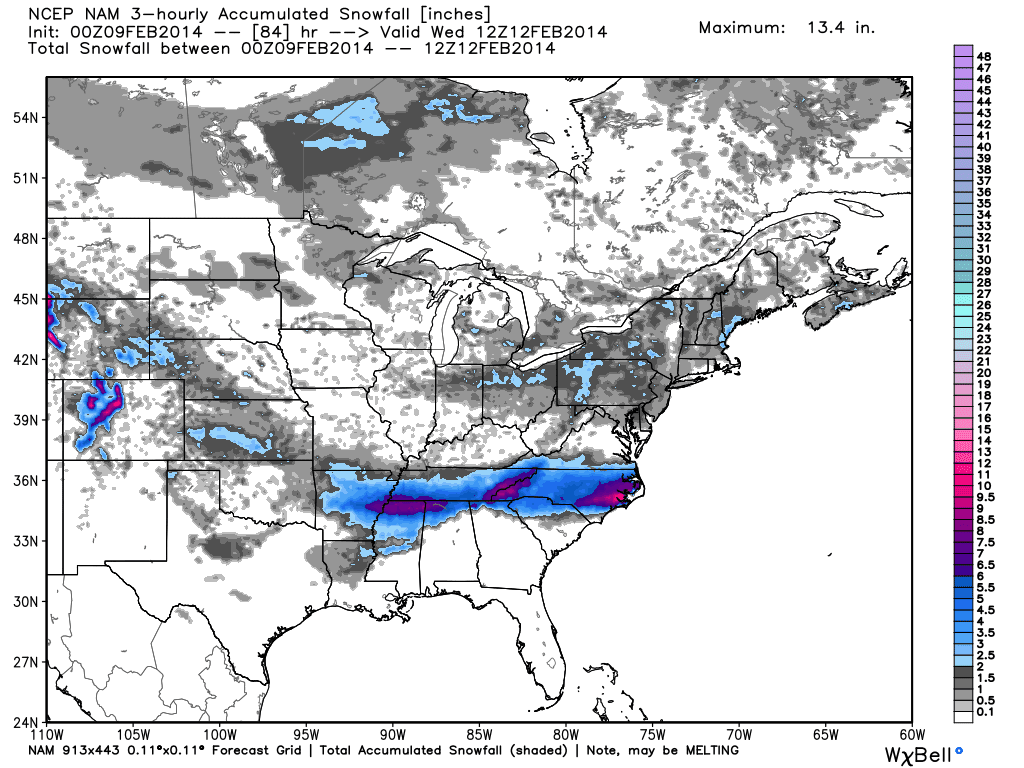 The NAM model above shows projected snowfall amounts over the next 84 hours. In this forecast, we see significant snowfall hitting the states of Arkansas, Tennessee, Mississippi, and Alabama, as well as North and South Carolina. The NAM model puts down amounts of 4-8" in eastern Arkansas, northern Mississippi and southwestern Tennessee, as well as in portions of North Carolina. The NAM model had previously been showing amounts well in excess of 12", though its latest numbers are far more believable. 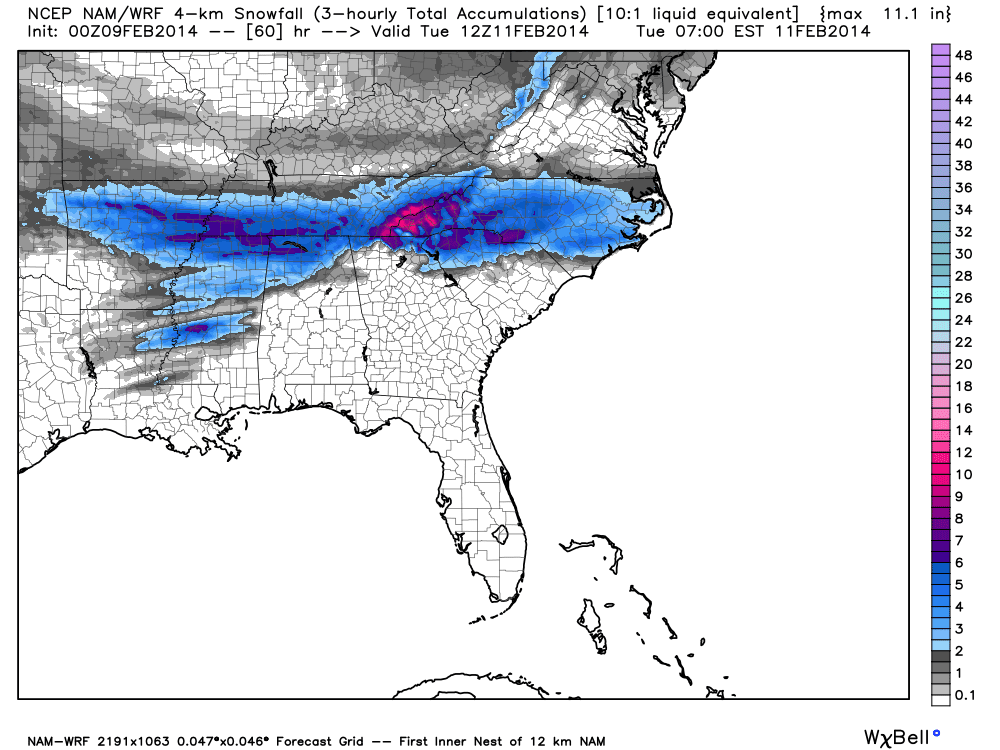 This image shows the high resolution NAM model forecast snowfall over the next 60 hours. While it retains the name of the NAM model, it is more closely associated with the WRF modeling system, has better resolution in its 'foundation', if you will, and only goes out to 60 hours instead of 84. The high resolution NAM model has a similar forecast as its lower resolution counterpart, laying down bands of 6" amounts in eastern Arkansas and western Tennessee. The high resolution NAM is more open to putting down some big snows in Louisiana and central Mississippi, though due to its snowy bias we'll have to wait and see what other high resolution guidance says. The model also agrees with another spot of heavy snows in western North Carolina, but because the model only goes out to 60 hours, it doesn't capture the full snowfall of the event in eastern North Carolina.

•A significant winter storm is expected to impact portions of the Southeast.

•Arkansas, Tennessee, and North Carolina are at risk for snowfalls in excess of 6".

•Travel may be severely hampered- stay home and plan ahead as best as possible.

Andrew
By Andrew at 9:28 PM 5 comments: Links to this post

It's looking like we will see the recent Arctic cold come to a quick end in mid-February. 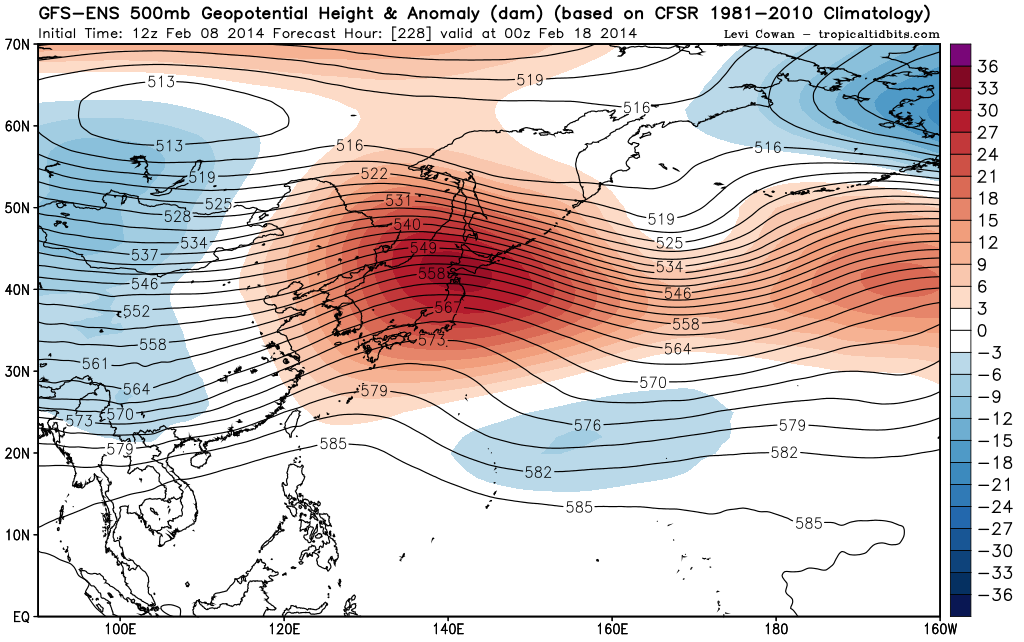 The image above shows the GFS Ensemble 500mb height anomaly forecast for February 17th over the western Pacific. We see strong ridging present over Japan and much of eastern Asia, with another swath of positive height anomalies displaced further east to the south of Alaska. Using the idea that a storm system in Japan can signal a storm in the US 6-10 days later, we can find that this strong ridge over Japan should also come back to haunt the US 6-10 days later. That would place warmer and quieter weather over the nation in the February 23-27 period. Considering high pressure should be affecting Japan both before and after this February 17th forecast graphic, it would be reasonable to think that this warmer/quieter weather may extend into early March, as well as closing out the last week or so of February.

This warm trend can be seen by the Earth System Research Laboratory's (ESRL) Analog Temperature 8-14 day outlook, as is shown below: 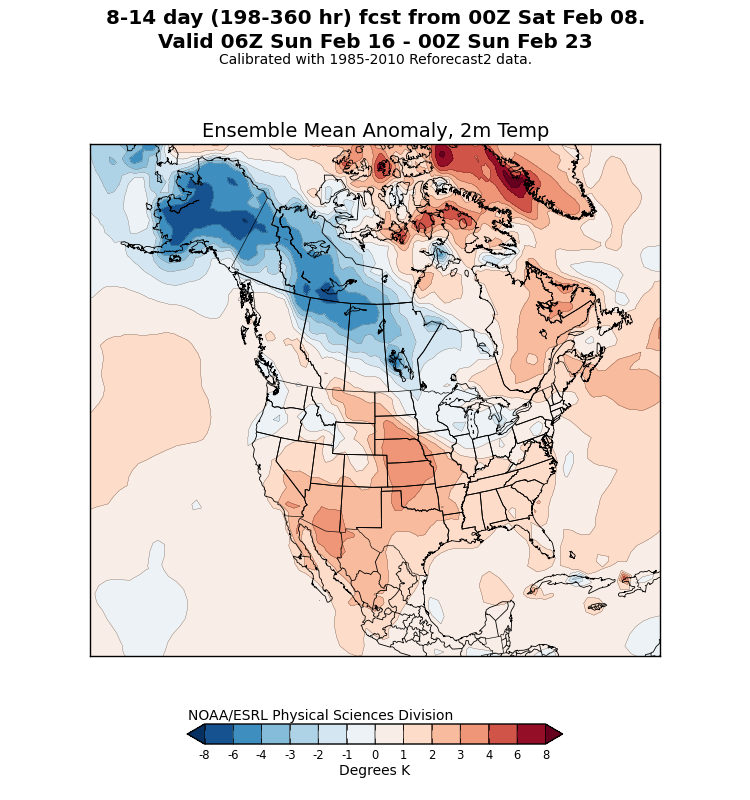 As we move into early March, it looks as though we will be heading into new phases of the Madden Julian Oscillation (MJO). Looking at the March 8th MJO OLR anomaly forecast, in the middle panel of the left side of the images above, we see deep blues spread out across the waters to the southwest and southeast of India. These deep blues represent enhanced tropical convection, and it also means an active phase of the MJO will be evolving.

If we compare that March 8th forecast image to the MJO OLR Composite image from the Australian Bureau of Meteorology, we see that the blues on the forecast image line up the best with MJO Phase 2 and MJO Phase 3, which are seen as the second and third images down from the left-hand side of the panels above. If we look at the low amplitude Phase 2 MJO (which guidance predicts we see when the MJO does enter Phase 2 before transitioning to Phase 3) 500mb height anomaly image below from scotlandwx.co.uk , we find that deep negative height anomalies are favored over the East US, resulting in colder than normal weather. The troughing in the Gulf of Alaska remains present, with suppressed ridging over the north central Pacific Ocean. Long range ensembles favor this type of set-up for the middle-late portions of February, and it's very possible this continues into March. To clarify, while the set-ups may be similar from mid-February onward, I currently only expect warmer weather for the mid-late parts of February due to East Asian ridging. Beyond that period, into early March, indications of East Asian ridging dissipate, allowing cold weather prospects for early March to flourish.

The 500mb height anomaly composite for all amplitudes of a Phase 3 MJO also favors some cooler weather in the East US, though the cold is more restricted to northern parts of the nation.

•We are looking at warmer weather over the United States in the closing week of February, possibly extending into the opening days of March.

•The pattern after the early-early March warm-up looks chillier, with a potentially favorable MJO (keyword is potentially due to the typical long range forecast caveats and inaccuracies) and favorable signs from East Asia after ridging moves out.

It looks like we may see a winter storm along the East Coast in the February 13-15 timeframe. 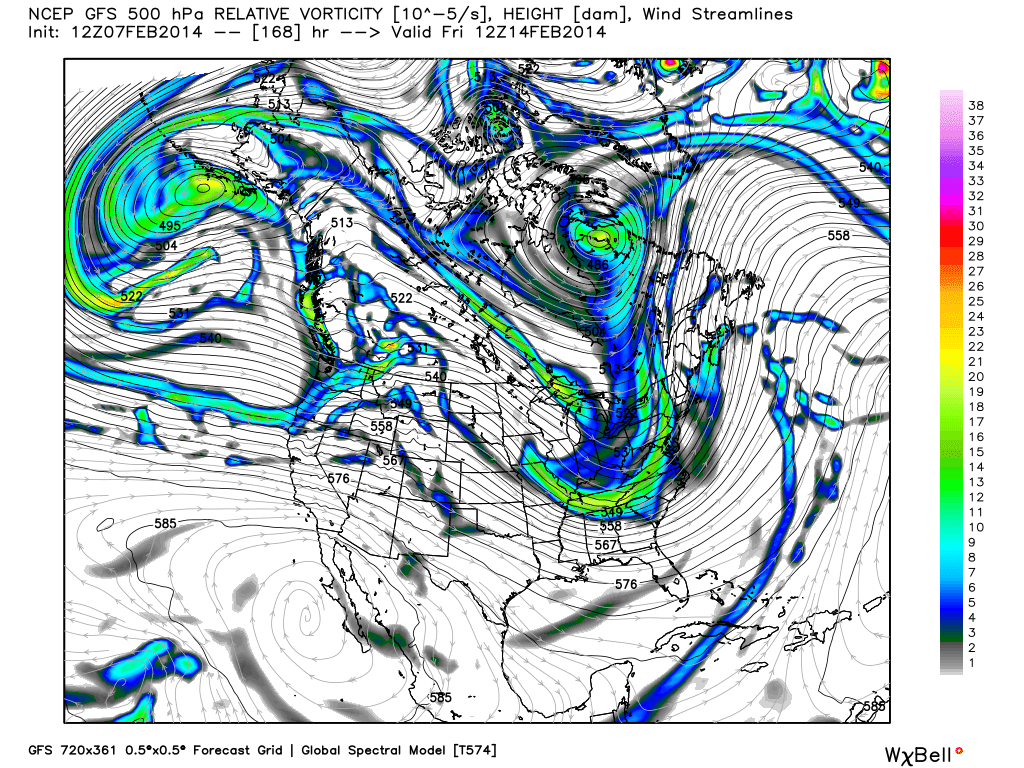 The GFS model indicates we will see a negatively tilted trough work its way down into the Northeast and Mid-Atlantic around Valentine's Day, in the midst of an established northwest flow regime. We see this regime set up as a result of storminess over the Gulf of Alaska, and a suppressed ridge in the West US. 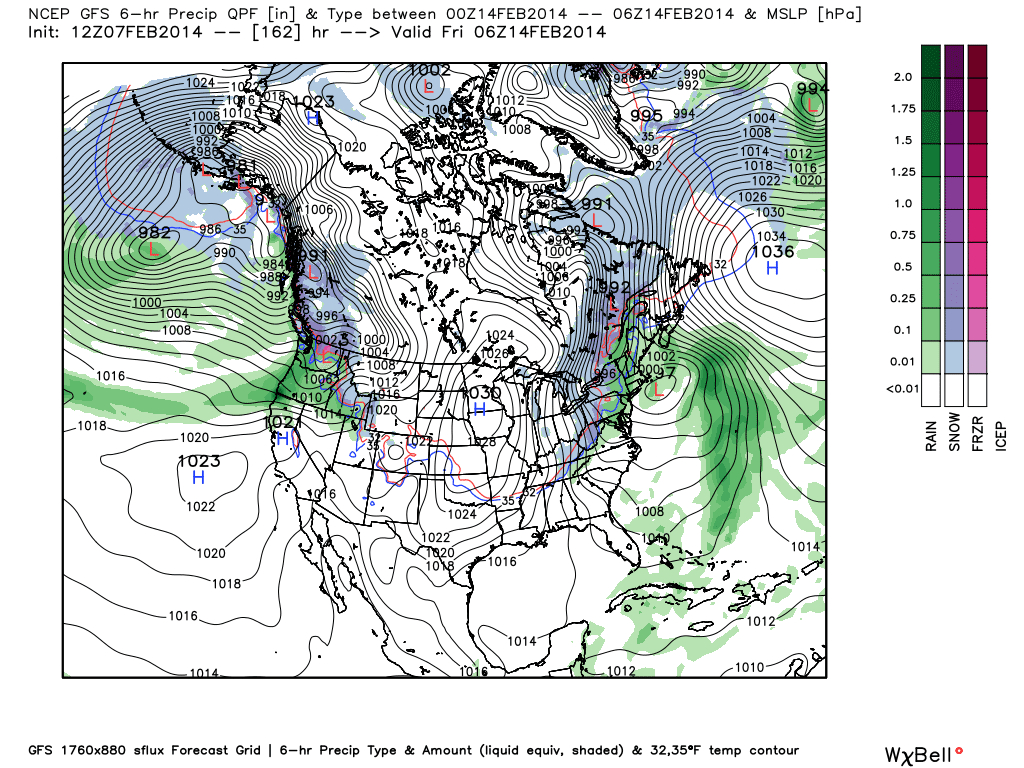 The GFS model wants to take what appears to be a strong clipper system eastward into the Northeast in association with the trough we saw in the image above. The clipper then transfers to the coast on the morning of Valentine's Day, resulting in snowfall for the interior Northeast. Rain looks to be the preferred precipitation type on this model solution for coastal regions. Since this is still in the long range GFS, none of this should be taken verbatim- we're trying to pick out the general pattern that could then yield a winter storm. In this case, the northwest flow with an Alberta Clipper transferring offshore seems like a rather likely scenario if the opportunity arises for a clipper to form around Valentine's Day.


The ECMWF has a similar situation, with the 500mb height anomaly forecast highly indicative of the northwest flow regime we discussed. The suppressed ridge and storminess over the Bering Sea is clearly evident, though the ridge in the Southwest is so suppressed the flow is borderline-zonal in that area. Nonetheless, we can still see the northwest flow alignment across the contiguous United States (CONUS).


The ECMWF model has the storm system impacting the Mid-Atlantic primarily, before heading off out to sea, only scraping coastal portions of the Northeast. This solution would lay down snowfall in the Mid-Atlantic states of North Carolina, South Carolina, West Virginia, and Virginia. This particular ECMWF model forecast lays down over 13" of snow in these areas, but these amounts would be better off cut in half for more accurate (but still slightly overdone) amounts.

So why will this storm hit the Mid-Atlantic and Northeast?

So what can we establish right now?

-The synoptic pattern looks favorable for a winter weather event in the East Coast, thanks to an evolving northwest flow pattern.

-A potential storm system is being modeled on forecast guidance that may impact the East Coast of the US.

-If a storm system does form in the United States, it looks like it will be favored to bring snow to inland portions of the East Coast, rather than coastal regions.