This post will show the GFDL model's long range forecast for the December-January-February 2013-2014 period. Additional models will be shown on here in the future. 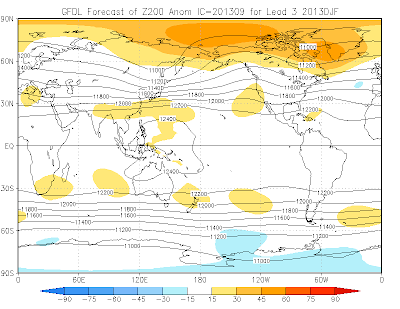 The image above shows predicted 200 millibar contour lines and anomalies. We're going to focus on the contour lines for right now. We start in East Asia. Looking closely at the image, we see tightened contour lines in the area around Japan. Considering there is a 6-10 day gap between storm systems in the East Asian area and storm systems in the East US, a tightening of contour lines could suggest an increased number of storm systems. This, in turn, may suggest a stormy East US this winter. We see a large ridging pattern across the Alaska/western Canada. This ridging could then provoke a colder than normal pattern to evolve across the Midwest and East US, as cold air flows southeast along the ridge. If the ridge extends far enough into Alaska, a cross-polar flow situation could set up, which would transport Siberian air to the States. A cross-polar flow is one of the situations that brings the coldest air possible to the US- another situation would be the cold air displaced to the surface as a result of a stratospheric warming. 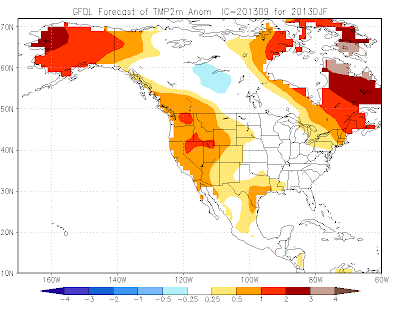 Temperature anomalies are pretty much in line with the 200mb forecast- strong warming trends in the Alaskan/west North American regions, and significant warming in eastern Canada into Greenland. The cause of this more significant body of warming is not immediately evident on the 200mb map, other than a slight ridge signal in that region. I would like to wait for another month or so to see if the GFDL corrects this east Canadian warming in the event it is incorrect. The split between the two warm air masses is where the coldest air of the season would be focused- central Canada into the Midwest. 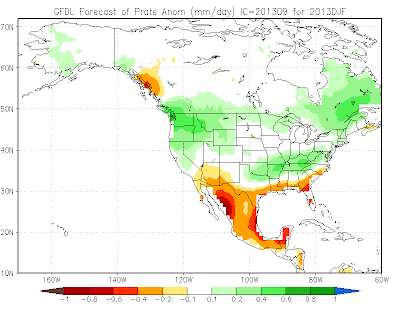 The precipitation forecast from the GFDL suggests a very wet Pacific Northwest and southern Midwest/Ohio Valley. I'll start off by saying I am most skeptical of precipitation forecasts in the long range because they seem to be the most vulnerable to sudden change. That said, this forecast does look good for a stormier than average Ohio Valley. The trend has been for a dry Midwest and lower Ohio Valley with my analog years, but if the eastern Pacific waters begin to warm up in coming weeks, my analog years will require change that could then see a different precipitation prediction. In any case, this forecast lines up with many that believe cold weather will enter the Midwest, Great Lakes and East US due to western North America ridging, among other things.

More of these posts will come out as we dive into fall and closer to winter.

Andrew
By Andrew at 6:34 PM 5 comments: Links to this post

Email ThisBlogThis!Share to TwitterShare to FacebookShare to Pinterest
Related: What Are The Models Saying This Winter?
Newer Posts Older Posts Home
Subscribe to: Posts (Atom)