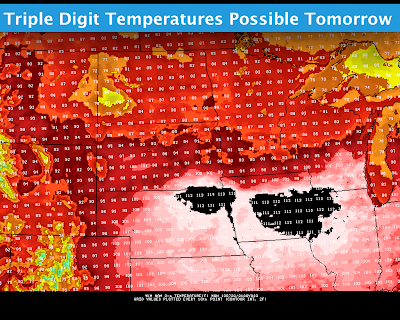 The 12z NAM is showing temperatures reaching beyond 110 degrees tomorrow afternoon, temperatures that could seriously threaten the health of thousands. Big cities like Davenport, Iowa may bear the brunt, with Chicago, Illinois not in a horrible position, but still passing 100 degrees.

The question is concerning the reliability of this model. It does seem way overdone, and I believe that temperatures are about 10 degrees more than what it will turn out to be. Nonetheless, dangerous weather is likely tomorrow, including triple digit temperatures across the Midwest.

Andrew
By Andrew at 6:59 PM No comments: Links to this post

This is the accompanying graphic to the latest winter forecast I issued, which can be seen here.
Sorry to everyone that this was delayed, I had a mix up in communications. 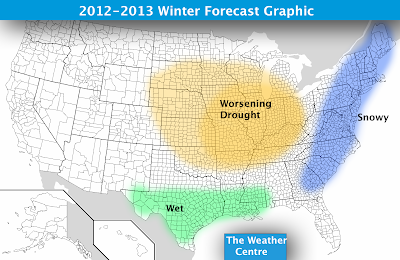 I am anticipating that an El Nino will continue into the winter months. At the moment, the Nino appears to be heading at least central based-ward, which would turn out an OK winter for the Midwest to the East Coast. The Nino should be on the weak to moderate side, which would also give the Midwest and Plains some snow this winter.
Confidence in the following information: 65%
As shown on the graphic above, I highlighted the East Coast for the snowy conditions. A recent post on the negative NAO (click here), as well as an El Nino and PDO possibly moving positively, a very interesting East Coast winter may be in the works.
Confidence in the following information: 70%
I believe that the drought still plaguing the Midwest and Plains at this time will continue, as the El Nino encourages warm and mostly dry conditions to prevail across those areas. However, the weakness of the Nino historically can spread the wealth to the mentioned areas, and this could provide a small amount of relief, should a heat wave melt any snow or prompt systems to produce rain over snow in the Midwest.
Confidence in the following information: 60%
The Gulf Coast looks to be in for a wet winter, with drought conditions already easing up on the region. Due to the presence of a developing El Nino combined with El Nino-like QBO values, I feel that this trend of wetness over the Gulf Coast will continue into fall and winter. It could get tricky should the NAO pull a fast one and keep the region dry for some periods of time.
The rest of the country has yet to gain enough confidence for me to outline it.
Andrew
By Andrew at 4:05 PM 8 comments: Links to this post

As I mentioned in my most recent winter forecast update, the North Atlantic Oscillation/NAO can be influenced by the Quasi-Biennial Oscillation, or QBO. Looking at the latest QBO readings tells me that the monthly average for June was -21.39. That is a very strong negative QBO that is undoubtedly helping out the NAO. Let's look at the NAO and QBO to confirm that there is actually a correlation between the two indices and their actions.


In the observed NAO, we see a very sharp downturn of the NAO beginning roughly at the end of May and solidifying in the beginning of June. the NAO has not reached positive territory since that date. If we look to the QBO for help, we see a surge to strong negative QBO territory beginning in April/May and continuing through June that seems to have helped/influenced this prolonged negative NAO phase.
Of additional interest is the tanking of the SOI beginning in spring 2012 and continuing to this day, which may also hold a correlation with these two indices.

So, the big question now is 'Will the NAO stay negative through Fall?'

Beginning in Spring, the 50mb temperatures had been fairly cool, even to near record low points. However, as seen in mid June, a warming trend began and has persisted to this day. This is a direct correlation to the change in the NAO: warmer stratosphere = negative NAO (usually).
That said, using the QBO and stratospheric temperatures, I would say that the atmosphere looks prepared to carry this negative NAO through summer and fall, and may even stick around for winter. However, I'm not too ready to go that far out, so I will just say a negative NAO in summer and fall looks like a realistic proposition.

Andrew
By Andrew at 2:23 PM No comments: Links to this post

The National Hurricane Center has outlined an area of showers and thunderstorms over the Caribbean and far southern Florida. This outline comes as a vigorous tropical wave is in the vicinity of the area.

There is a 10% chance of formation over the next 2 days from this tropical wave, and while showers and storms are all over, upper level winds are unfavorable for intense formation, while lower level winds could also be on the iffy side, and this could pile on the stress of unfavorable atmospheric conditions.

Of importance is also how anywhere from 10 to 30 knots of wind shearing is over the area, which will also act to suppress the strongest of tropical cyclone formation. All in all, formation isn't looking too good for the short term, but if shearing can die down and upper level winds calm down, the potential will certainly strengthen.

Andrew
By Andrew at 11:28 AM No comments: Links to this post