The phenomenon of the polar vortex collapse involves just what the name implies: collapse of the semi-permanent polar vortex. The polar vortex is the low pressure system that sits over the Arctic, regulating how much cold air escapes south into lower latitudes. When the vortex is weak, the grip on cold air is weaker, so the cold air escapes south (this is also known as a negative AO). When the vortex is strong, cold air is held up north especially strong, so warm air prevails in lower latitudes (a positive AO is described here).

The polar vortex can become so weak that it needs to split up into multiple vortices. When this happens, it's like you're holding paper on a windy day, but you release your grip on the papers. You only manage to retrieve a few. The cold air does a similar action in which the cold is released and flows to southern latitudes, but some cold still remains within the vortices. The cold isn't the only thing going to southern latitudes in this situation, though- when a split happens, the vortices tend to drift south to wherever the atmospheric pattern will allow them to go. Some recent forecasts have one vortice entering much of the United States, but that's a post for another time.

This forecast, also from the ECMWF and also for the Day 10 forecast, shows potential vorticity values for the 850 K level (~15 millibars). As you can see, there are no more oranges or whites or reds. Why is that? The polar vortex has disintegrated. I kid you not, this is the classic example of the polar vortex completely demolished. There is no polar vortex at this level. If this was in the lower stratosphere, one could only imagine what cold would be unleashed upon the Earth in such a situation.

I have been seeing increasingly-weak forecasts for potential vorticity values in the lower levels of the stratosphere, telling me this could be a sign that a collapse of the polar vortex is impending. A certain, trustworthy indicator tells me cold will be in the vicinity, the question is where does it manage to penetrate into the US.

The Climate Prediction Center, basically the long range branch of the government's weather service, continues to enhance forecasts for extremely cold forecasts in the medium range.

Temperature anomalies can also help decipher height anomalies, like high and low pressure. In the areas we see reds, above normal temperatures are found, meaning high pressure should also be found. This is reasonable, considering we need high pressure in the West in order to create low pressure and cold conditions in the East.

Andrew
By Andrew at 1:14 PM No comments:

I have determined that the risk for the polar vortex dropping well into the United States - no matter how small the chance - is increasing, and I'll explain why. 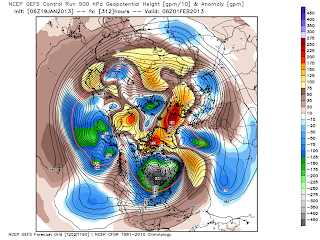 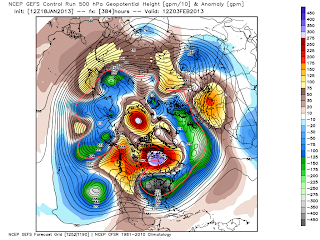 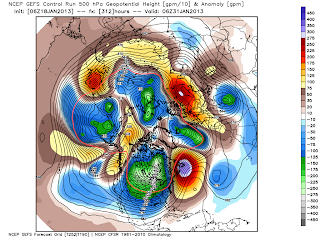 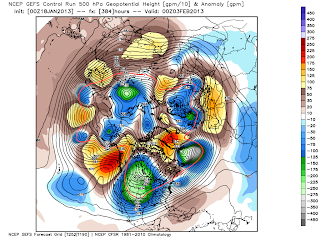 The GEFS Control is displaying 500mb height anomalies, where cold colors indicate low pressure areas and warm colors indicate high pressure areas. Areas of very bright green or even a gray color within that green is a polar vortice from the polar vortex, which will be splitting up in coming days and moving south, hence the basis of this post. The forecasts I picked out are within the last 6 runs of the GFS Ensemble, meaning 4 out of 6 of the past 6 runs are showing the polar vortex intruding on the US. The most obvious intrusion is the second image down, where the polar vortex is making its home in the Great Lakes. These forecasts should clear up with time.

But it's not just the GEFS Control forecasts, it's also the ESRL/PSD Ensembles. The PSD Ensembles are a group of ensembles not unlike the GFS Ensembles. They are run at the ESRL agency, a counterpart of the American NCEP agency. This is the forecast for Hour 360, also showing 500mb height anomalies. You can clearly see the polar vortex pushing south, as shown by the light blues in Canada and the North Plains. The depressed contour lines in that region also show that the vortex may be trying to make a move south. At this point, only the North Plains would experience the coldest of the cold. However, frequent clipper systems could bring cold air down to other regions of the US, but that potential has yet to be realized.

It does appear the potential for this actually happening is on the rise, but the potential is still low at this time- I want to see more models and ensembles catching on before I even think about raising a serious concern of this happening.

The last 2 GFS model forecasts and the most recent ECMWF model forecast have introduced the idea of a winter storm hitting the Northeast with significant accumulating snow.

The above image shows the GFS model forecast, valid for the afternoon of January 26th. Precipitation type, low and high pressure areas, pressure contours, and 1000-500mb thickness values are shown in the above image. You can see a strong storm system immediately offshore the New England area, producing widespread precipitation across the Northeast and even into Florida. Much of the precipitation snow in the Northeast is occurring as snow at this forecast point, and by the looks of it, this would be a Nor'easter situation of heavy accumulating snow in the region.

The total accumulated snow up to Hour 192 shows significant snowfall accumulation from this storm, with widespread amounts exceeding 9 inches, and isolated areas exceeding the 12 inch mark. This is indeed a classic Nor'easter situation, but the question is, can this really happen? We will be seeing the polar vortex uncomfortably close to Greenland, which could hamper a negative North Atlantic Oscillation (NAO), which in turn would discourage a Nor'easter. We will need to watch this potential very closely and not get too excited yet.