It has come to my attention that I am being impersonated on my own weather blog.
I am furious at this. DO NOT believe ANYONE who says it is me unless it is linked to my blogger profile.

THIS IS NOT ACCEPTABLE.
By Andrew at 8:52 PM 8 comments: Links to this post

Animations of the 50mb temperature level (as shown above) suggest that a sudden stratospheric warming (SSW) is about to take place.

A chart of observed 70mb temperatures shown above clearly shows the aforementioned warmings. The first stratospheric warming is shown as the first red spike on the far right of this graph, and the recent warming (and soon to be SSW event) is shown at the very end of the image.

This was all mentioned in yesterday's big stratospheric post (link here) in how warming in the stratosphere will provoke the polar vortex to sustain heavy damage, possibly to the point of collapse in upper stratospheric levels. That means cold weather starting mid January. 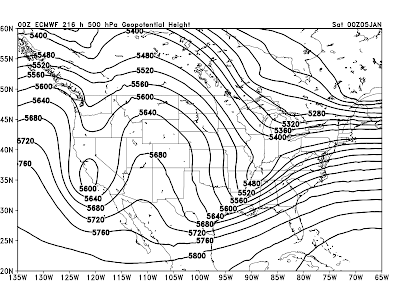 It looks like the potential is arising for a winter storm to hit the Midwest and Ohio Valley at the end of the first week of January. This possibility is being shown by the two major models (ECMWF and GFS) which we will review right now.

The above image is the ECMWF's 500mb height forecast for the evening of January 4th. Depressions in these isobars (lines of constant pressure) signify low pressure systems, while arcing formations depict high pressure systems. The ECMWF shows the storm system in the southern Midwest at this time. Typically, this would be a good snow maker for many in these two regions. However, the jet stream is aligned in something called a split flow pattern.

The split flow pattern involves high pressure stationed in the Pacific Northwest, leading to a literal split in the jet stream, and thus two branches of energy form: what I call the Southern Jet stream and the Northern Jet Stream. In this ECMWF Forecast, the Northern jet stream is stationed in Canada, and is shown by several isobars very close together. The Southern jet stream goes through Baja California, Mexico and the Southeast in a situation that could easily provoke severe weather. This split flow pattern keeps the cold too far north for these types of systems to access. 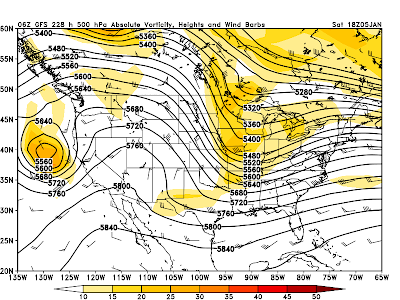 The GFS forecast for this storm system has the system further north, into the Midwest at this point. The GFS later brings the system down south into Kentucky like the ECMWF, but there are still big timing differences. The ECMWF and GFS do seem to be in good agreement as far as showing a common track, but the key thing is timing. It may just be 24 hours between the two forecasts, but that 24 hours can and will dramatically alter forecasts for this system, as demonstrated by these two models.

I think the ECMWF's forecast is more realistic. I find the split flow regime more likely at this point in time after a temporary Rex Block gives way.