The National Hurricane Center has declared the birth of Tropical Depression SIX just off the coast of Africa this evening.

The NHC is projecting TD-SIX to move on a mainly west pace as it strengthens into a tropical storm. However, following this strengthening, weakening into a post-tropical cyclone appears likely as TD-SIX enters a heavily-sheared and very dry-aired area that will kill the system right off.

For the time being, however, satellite imagery indicates a very strong and compact core of TD-SIX with outer banding already well developed, mainly on the southern and eastern flanks of the system. The northwest side of TD-SIX is very inactive, and further analysis of the atmosphere does show intense lower level winds to the northwest of the system, hence the inactivity. 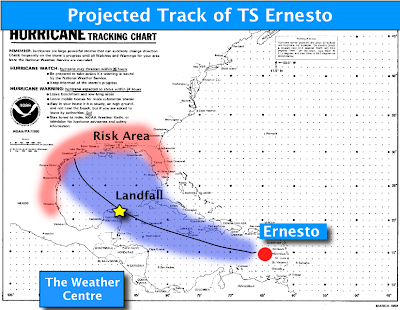 I am forecasting Tropical Storm Ernesto to make a double landfall- once on the Yucatan Peninsula and another time on the Gulf Coast.

I believe Ernesto will follow model guidance and move northwest into a sharp north-northwest motion with time. As Ernesto moves into the western Caribbean, strengthening into a hurricane is likely, and Hurricane Ernesto should make landfall on the Yucatan Peninsula. There is a chance that Ernesto could skirt the Yucatan Peninsula and not make landfall, but for now I think that a brief landfall is likely.
Following this brief landfall, Ernesto should rapidly strengthen in the vicinity of the Gulf of Mexico. I find it likely that strengths in the Gulf of Mexico could surpass Category 2 strength, possibly entering major hurricane status.

Climatologically, tropical cyclones that originate from Africa take one of two paths: A sharp turn north that hugs the East Coast and eventually shoots out to sea, or taking the southern route that moves through the Caribbean and hits the Gulf of Mexico. Given that TS Ernesto is already in the Caribbean, I find it unlikely that Ernesto will ride the coast. Rather, going with history, Ernesto should scrape/landfall the Yucatan Peninsula and then hit the Gulf Coast.
As of now, the models remain spread out over a Gulf Coast landfall, but if I had a say, I would think that Texas and Louisiana would be at the most risk, along with part of Mexico. However, since stronger storms have a tendency to curve north, it may come down to the wire in when Ernesto strengthens and where this strengthening happens in order to determine how far Ernesto curves north. That said, it would be a good idea for the entire Gulf Coast to be on watch.

There is a severe weather risk over much of the Lower Great Lakes and western Great Lakes in general tomorrow, as a disturbance swings south from Canada and into the Great Lakes region.

Scattered strong to severe thunderstorms will fire tomorrow evening over the Lower Great Lakes regions. They will likely begin as individual cells, enhancing the potential for large hail and damaging winds before a clustering of the cells happens overnight. At that point, damaging winds are expected to take over as the main threat, with large hail still a possibility.

Invest 90L has moved off of Africa and currently poses a 30% chance of development into a tropical cyclone in the next 48 hours.

Satellite imagery of Invest 90 shows a well defined area of showers and thunderstorms with outer banding already evident on the southern part of the system. What concerns me is the raggedness of the system, especially on the north and eastern side of the invest. This raggedness leads me to believe that conditions across those areas are unfavorable for development, and also tells me that development of this system in the next 48 hours does not seem to great unless the system is able to better organize itself.

A water vapor loop indicates a wide swath of dry air to the north of Invest 90, supporting the theory that this system is having some troubles. Additionally, there is an arm of drier air to the west of Invest 90 that appears to be increasing. This will also hamper any development potential over the next 48 hours.

There is no model guidance available yet, and no satellite floaters on site yet. Due to those two lacking factors, I am unable to accurately provide any other details.

The National Hurricane Center is forecasting Tropical Storm Ernesto to move to the northwest and clip the Yucatan Peninsula before moving towards the Gulf Coast. Let's take a look at Ernesto now. 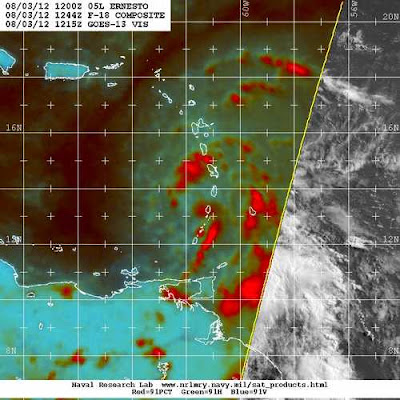 A loop of water vapor imagery indicates that there is a wide expanse of dry air ahead of Ernesto, and moving west as Ernesto is. This does concern me for possible development, as the western part of the system may never get too organized it the dry air keeps itself in the path of Ernesto. That lack of development in the western flank may hurt overall development for the system.

Lower level winds also pose a challenge for development, with at least 20 knots of lower level winds present. While not tremendous, this does still introduce another obstacle that will need to be dealt with by Ernesto in order to ensure proper development. Additionally, winds to the west of Ernesto are also strong, and this will only continue to hurt chances for significant development over the next 5 days in the Caribbean.

Shear tendencies near Ernesto are fairly strong, with at least 50 knots of shearing on the northeast side of the storm system. While that is to the northeast, there is another 30 knots or so of shearing to the west of Ernesto, with tendencies on the rise in the area. This, combined with significant lower level winds, will likely pose an interesting situation for Ernesto's development chances. 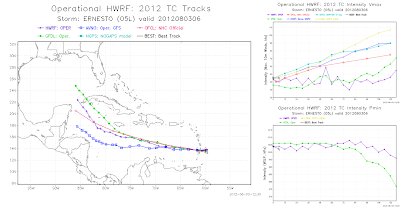