Renegade Nadine On The Horizon?

The National Hurricane Center has put the remnants of Tropical Storm Nadine at 40%, as upper level winds are marginally favorable to reform the system.

It would be unusual to have this system reform, but not too uncommon overall. This would only continue to baffle the meteorological world, as this Atlantic hurricane season is already running above normal in an El Nino- something not usually seen.

Andrew
By Andrew at 9:41 PM No comments: Links to this post

Widespread frosting and freezes are likely across much of the Midwest and Plains tonight, as the coldest air of the season moves into the country. Frost advisories stretch as far south as Springfield, Illinois, and a freeze warning is on the border with Canada, making this event span hundreds of miles.

Actions must be taken now to save plants and other vegetation in harms way of this first autumnal frost/freeze. Here are some tips to help your plants survive this night.

-Cover your plants with some cloth or an other covering. If the frost hits, the covering will take the brunt of the frozen dew, keeping the plant dry. NOTE: I have seen someone in my neighborhood put a styrofoam container over their plants with a brick on top. It seems to have worked well.

-If you absolutely adore your plants and feel like it's too early to see them off, you may even go so far as to put hand warmers around the plant in addition to covering them up. It isn't a bad idea if you want your plants to receive as little harm as possible.

Andrew
By Andrew at 9:30 PM No comments: Links to this post

We are seeing some major deviations in the last Lezak Recurring Cycle (LRC) cycle. Let's take a look at what's happened in the last 40-50 days.

This is the observed 500mb chart on August 7th of this year. Here, we see a moderate ridge stretching from the Southwest into Western Canada, as well as a disturbance pressing south into the Great Lakes. Also being watched is a ridge of high pressure off of Atlantic Canada, and a strong disturbance near the Gulf of Alaska.

This day appeared to feature no major weather events, although some heavy precipitation was observed in the Southeast. The rest of the nation was pretty much dry.

Here, we see a much different, yet somewhat recognizable, pattern across the North American continent. Most notably is a very strong low pressure system being forced south into central Canada, and spreading an autumnal chill through the north central and north east regions of the US. This was not seen in the last cycle. Given, a much weaker version of this did appear on the August 7th chart, but the huge difference in strength is quite surprising.
Additionally, the ridge of high pressure I mentioned in the August 7th chart over western Canada is there, but is stronger. Also note that the same ridge pushed the disturbance previously centered over the Gulf of Alaska further west.
We still are seeing a ridge to the east of Atlantic Canada, signifying the presence of the same pattern, but that ridge is stronger than what was previously seen in early August.

We are entering fall, and this is the season when we begin to see the old LRC pattern die off and the new pattern emerge. Seeing as we just entered fall, these deviations I mentioned should become more intense and common, until the old pattern just disappears and a new pattern emerges.

Deviations are typical in every LRC cycle, but this particular comparison seems unusually anomalous from one date to the other. If I didn't know any better, I would begin to think we are starting to ease into that transition period between the new patterns. As always, time will tell, but this is another interesting development of the Lezak Recurring Cycle.

Andrew
By Andrew at 2:24 PM No comments: Links to this post

In this week's 'Long Range Lookout' segment, we'll examine what propsects the already-active fall season for the North US has for continuing into the next few weeks. 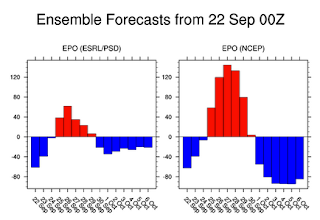 This is an ensemble forecast for the East Pacific Oscillation, or EPO. In a positive EPO, we see a strong trough centered over the Gulf of Alaska, with a ridge of high pressure extending west from Baja California and stretching across much of the Pacific. Additionally, a cold north US is a common trait of a negative EPO.

Recently, the EPO has been in a negative state, and this has been shown by the appearance of a strong trough over the Gulf of Alaska and cool temperatures across the northern US. This bodes well with typical negative EPO conditions. I will explain how this plays into a bigger pattern in a little bit. 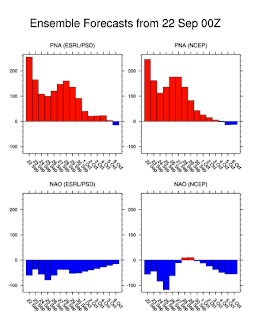 We are also watching the Pacific-North American Pattern, or PNA pattern. In a positive state, the PNA creates a strong ridge over eastern Alaska and much of western Canada. This ridge enables storms to jump over the ridge, plummet down towards the Southwest, and follow the jet stream into the southern Plains. From there, the storms take a path that bodes well for high precipitation across the Midwest, Ohio Valley, and Great Lakes.

In the most recent week, we have had a positive PNA. This has been well reflected by the presence of a strong ridge in northwestern North America. Storm systems have been hitting the Ohio Valley and Midwest at a fair pace as well, illustrating the effects of the positive PNA.

Now, both of the above indices can (and did) mix together. The two combined to produce a ridge in the West, and a stormy pattern in the East, as illustrated below. This chart was from September 20th.

If the ensemble forecasts from above do verify, we could again see strong storm systems hitting the North US and bringing very cold air down to the region. This also includes the risk of some severe weather in the Northeast, as cold air moves in on warmer air brought up by warm fronts. This could also be a crucial sign of the incoming new Lezak Recurring Cycle. Every little change could mean something bigger later on.

Andrew
By Andrew at 1:59 PM 4 comments: Links to this post

The GLAAM index remains at an unfavorable position to find the presence of an El Nino at this time, and has been unfavorable for quite some time, as the chart above shows. Not one day in the past several months has the GLAAM reached above zero, which would indicate an El Nino.

The GWO (Global Wind Oscillation) has been hovering in neutral to negative territory for quite a while, indicting the lack of recognization is continuing to the El Nino, another step in the wrong direction. However, in recent weeks, the GWO has been moving slowly up, a more encouraging sign that the El Nino may finally be gaining recognization in the atmosphere. 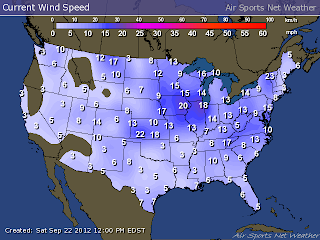 The first day of fall greets Midwesterners with a lot of wind, as the region is stuck between two cold fronts- one of which moved through yesterday, the other which has yet to move down through the region.

Latest observed sustained wind speeds shows as much as 20 MPH being reported near the Quad Cities area, with a windy 18 observed in Chicago at this hour. Small branches have been brought down across parts of the Chicagoland area, and this appears to be the case as well in eastern Iowa.

Forecasts from the WRF Model indicate that these winds will be dying down as the day progresses into the afternoon. This windy day comes just on the heels of a slightly windier day two days ago, when slightly larger tree branches had come down- some around the 1-2 inch threshold.

Andrew
By Andrew at 11:09 AM No comments: Links to this post

Today's Weather Hotspot: Northeast
A one-two punch of cold fronts will be moving towards the Northeast, creating a severe weather situation for the region. As cold air invades the warm air placed over the region, showers and thunderstorms (some possibly severe) will ignite. Considering this is the fall season, extreme severe weather is not too likely, but gusty thunderstorms are possible.

North Plains
High pressure will move in behind a pair of cold fronts and place chilling temperatures over the area for the day Saturday.

Florida
Showers and storms are likely, especially in the southern region. As is typical with Florida thunderstorms, be aware of sudden pop-up cells that may form within minutes. No significant severe weather is expected.

Houston, Texas
High pressure will settle in over the area before an advancing cold front gets too close for comfort to the region. A gradually-clouding over sky is likely today.
By Andrew at 6:00 AM No comments: Links to this post