The fact of the matter is, the month of December will probably end up warmer than normal as a whole. Don't believe the CFS weeklies, they're bringing this cool-down too quickly.

As i've consistently been saying since October, Siberian snow cover anomalies for that same month can and will impact cold weather in the following winter months. Because of a deep below normal snow anomaly in the first half of October, I'm not surprised one bit by the warmth that has been experienced across the nation, and am not surprised by the incoming warmth that will push temperatures well past average values for this time of the year. 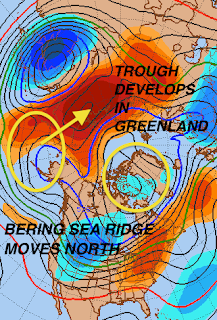 One thing I find encouraging is the Bering Sea ridge will be shifting north into the Arctic Circle. Good, that means the Polar Vortex will be faced with another challenge of holding itself together while the Bering Sea ridge has now moved into its territory. However (and this is the disgusting part), the ridge will set up in a manner that forces a persistent trough to set up near Greenland, which would mean the dreaded positive NAO.

As if matters couldn't get any worse. This is like trying to solve a puzzle, but you keep receiving some pieces at some times and losing other pieces at other times.

Don't think for a moment that this winter will be anything like last. Last winter, Siberia nailed the forecast with snowfall in October 2011 dry as a bone. Lo and behold, the winter of 2011-2012 ended up as one of the warmest in history.

Before we can even think about getting cold and snow to the States, we have to beat the 'obstacle course'. One of these obstacles is the Bering Sea Ridge / negative PNA issue. We should have the former cleared up in due time. However, the negative PNA obstacle could pose problems later on.

THERE IS GOOD NEWS, HOWEVER: The ensembles are toying with the idea of this ridge vaulting  into North Europe, which could then combine with a Greenland ridge and possibly strike up a negative NAO. Could this happen? I would like to see some more ensemble runs before I say yes, but if such a solution happens, cold could become more prevalent than I am thinking. Not a freeze-out, but on a general cooler tone.

We are indeed seeing a sudden stratospheric warming, but keep in mind this warming is coming from record low levels at the 70mb level of the stratosphere. This SSW puts the 70mb temperatures still well below normal, so don't expect the stratosphere to save the day and banish cold weather to the south for at least a couple weeks.

The Madden-Julian oscillation is waking up from its deep sleep in the circle of death (COD), and is now in the weakest possible state in Phase 2. Slight strengthening of this phase is expected before moving back into Phase 3 and eventually - you guessed it - into the Circle of Death. But there may be hope. The NCEP forecast above depicts the MJO surging into Phase 1, which would support a wet and stormy weather pattern prevailing across the Eastern US. Height anomalies during Phase 1 support a deep Bering Sea trough, a positive PNA pattern and nice negative NAO pattern, essentially your typical college care package, but with gold and silver inside rather than small toiletries. The Phase 1 even gives some love to the idea of high pressure (HP) anomalies in north Asia, not unlike the extreme high pressure forecasted in the top image.

But before you sprint to the streets, proclaiming that the winter is coming on, full steam ahead, I must caution you to remain weary of the polar vortex. I do not trust the idea that the HP in North Asia will combine with a negative NAO to cut the polar vortex in half, as the MJO showed. No- I expect the HP anomalies in North Asia to overwhelm the Arctic. In response to the strong HP, a very strong LP (low pressure) anomaly will develop both in South Asia and potentially the Arctic Circle. If the latter idea occurs, Greenland would more than likely be affected. Hesitant ensemble forecasts of the NAO confirm my skepticism on the idea of the weather pattern suddenly favoring cold and snow in the East.

Want to know why I disprove the CFS v2 temperature anomaly for the Week 4 forecast today? This- the long range CFS v2 Arctic Oscillation (AO) forecast I managed to dig out of the bowels of the Climate Prediction Center. The black line enhances the neutral 0 line between above and below normal anomalies. The CFS v2 projects the AO to remain nearly always above normal through December and into early January, but don't believe that January stuff. Focus on the mid to late December timeframe. If you had been focusing on Siberia (like I have been), you would know that such an Arctic Oscillation forecast IS plausible, and that means a stronger polar vortex, and the HP in North Asia could push that east into Greenland to fight a negative NAO, or the North Asia ridge could move east to combine with Greenland and form a negative NAO.

In summary, I'm not too optimistic for December. The storm pattern will get more active as the Bering Sea ridge moves north into North Asia, but this movement will provoke a stronger polar vortex (unless the ridge moves into Greenland), and thus better possibilities for warm weather. However, if all turns out alright, January and February will still be cold. Fingers crossed, folks.

Andrew
By Andrew at 9:31 PM 6 comments: Links to this post

A significant stratospheric warming event, or SSW event, is currently ongoing across the lower stratosphere.

The above image shows 70mb values from 2011 and 2012. The green dashed line displays average stratospheric values for that time of year. If we look at the most recently observed line in the stratosphere, we see that significant warming has occurred, with a sharp spike in temperatures now being observed.

While the stratosphere is so high up in the atmosphere, it does have significant implications on our weather now. What the warming stratosphere does is it weakens the polar vortex, which, when the vortex is strong, can restrict cold air from the US. Now that a SSW is occurring, the polar vortex is weakening, and a stronger push of cold air south should begin. However, the presence of the ongoing ridge over the Bering Sea (and the ECMWF's idea of said polar vortex restrengthening over Canada) tells me to be cautious of any incoming cold weather calls.

Andrew
By Andrew at 5:23 PM 3 comments: Links to this post