We are tracking a storm system that will bring snowfall to the Upper Midwest in the next few days. We will be seeing the system move through Iowa, Wisconsin before darting up the Great Lakes and firing out of the country. This system will bring anything from snow to freezing rain to severe storms. Let's focus on the snowstorms here.

Here's the forecast snowfall for the next 72 hours, which encompasses the event. It looks like we may see widespread 3-6 inch totals across north Minnesota, with 3-5 inches towards the middle of the state.
This storm will be rapidly strengthening as it moves up towards the Great Lakes, meaning some potential thundersnow due to the sudden nature of the strengthening. With intense storm strengthening, it opens the door to many phenomena not normally seen during regular snowstorms.
By Andrew at 8:05 PM No comments: Links to this post

Keep Up to Date on Severe Weather

Keep up to date with severe weather with our new Severe Weather Centre.
Click Here for live coverage of severe storms.
By Andrew at 3:19 PM No comments: Links to this post

Why I Think February Will Be A Wild Ride

Lets face it- this winter has been horrible for snow lovers. It has made many, if not all, become ecstatic over 1 inch 'snowstorms'. Well here I stand today telling you that there is indeed a light at the end of the tunnel. And here's why:

Potential Vorticity (PV).
Potential vorticity, in a very simple nutshell, is increased in the presence of low pressure systems. In areas where there are ridges of high pressure, PV values are lower. The PV is a characterization to tell where the polar vortex (VP) is. So let's do a comparison using the ECMWF model.
Here's the 24 hour forecast from the ECMWF model.

We have PV values very strong over around Asia, indicative of strong storm systems. Something i've picked up on is that weather from around the world can help determine weather for the US. Basically, if Asia's getting a huge storm, and storms move from Asia across the Pacific into the US, it would be logical to think that the US would get a big storm. We will focus on that later. In the image above, we can see a polar vortex mainly displaced off into Asia as two ridges are pushing into the polar vortex to make it attempting to split. These two ridges are essentially keeping the polar vortex and associated potential vorticity values out in Asia, therefore displacing the cold and making the whole ordeal turbulent and henceforth causing a fiasco between the AO and NAO due to the displaced polar vortex which essentially makes up the AO.

Here's hour 240 of the ECMWF. It is long range, so use with caution. We can see a major storm system making its way onshore the Northwest  CONUS (continental US) as the polar vortex is once again displaced and spread out across Asia and the US.

Here's the thing- the polar vortex is not nearly as strong as it was in December. The way it is misshapen and disfigured these days has led me to believe that the polar vortex is on its last breaths. Because it's not common to have a piece of the polar vortex in the Northwest US. Additionally, because it is so disfigured, it is not able to reconstruct itself due to intervening ridges and a general unfavorable scenario to see the vortex do so. If the polar vortex was fine, we would see something resembling a band of high potential vorticity levels around the North Pole (white circles in the images), with no orange in the US or Asia. If we see one more big Sudden Stratospheric Warming (SSW) event, I think there is a decent shot at seeing the polar vortex split off and die out in some aspects.
The GLAAM index is falling, as shown in today's post, indicating the opportunity for the pattern to shift is coming up very soon, if not already happening.

So here's my thoughts: I expect snowstorms to be on the rise and cold shots to become more common. I believe that the record breaking temperature days are behind us, and February is going to get a whole lot of revenge from December. Snowstorms will increase, particularly in the Midwest/Great Lakes and possibly the Northeast. Lake Effect Snow will be once again a commonplace occurrence. 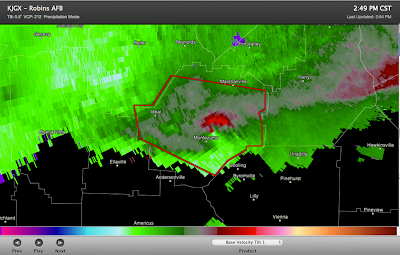 The GLAAM is an index we recently discovered, and we have found it to be linked with ENSO conditions. In a very simple nutshell, an El Nino is usually associated with a positive GLAAM. A La Nina is usually associated with a negative GLAAM. Using that, we may have found the reason why Dec/Jan was so bad. As you can see, the GLAAM was positive in the beginning of January, but as you can see the GLAAM has been diving. The diving GLAAM is adding to the building evidence that February may be a wild and snowy one. As we learn more on the GLAAM we will let you know what impacts the GLAAM may have on the month of February.
By Andrew at 11:10 AM 2 comments: Links to this post

Severe Weather Ongoing Across the Southeast

There is a tornado watch in effect from east central Mississippi into the north half of Georgia as well as south central Tennessee. These storms are shown to have a 'moderate' potential for tornadoes, as per the Storm Prediction Center.

Surface analysis is showing that the storms are originating along a cold front, with warm, unstable air being pulled onshore from the Gulf by the warm front curling around Tennessee and Georgia.
Because these storms are moving east-northeast, there is a potential for these storms to be 'training', or have many storms go over an area and produce a flooding rainfall situation, much like a long train going over the same train tracks.

Stay safe, everyone.
By Andrew at 8:37 AM No comments: Links to this post